Four years have passed and 199 full reviews have been written! So let's look at another favorite of mine to celebrate #200.
The second game in the Paper Mario franchise and one of a handful of RPG offerings to appear on the Gamecube, where it got some relatively high acclaim from fans, especially in light of the very lacking genre offerings on the Nintendo 64.  But is this a fun adventure that is still worth undertaking today, or is it just too dated and living in the shadow of better games? 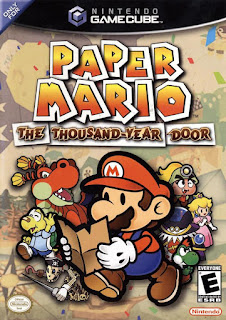 When it comes to Mario's foray into the realm of RPGs, Super Mario RPG is undeniably the most popular of them all.  Released as something of a "last hurrah" for the SNES platform, it was a powerhouse of Donkey Kong Country styled 3D-rendered graphics (aided by an isometric viewpoint), inventive mechanics that worked mini-games into every element of the gameplay, a killer soundtrack by Yoko Shimomura, and a surprisingly good storyline that felt every bit as epic as you'd expect from a collaboration between Nintendo and rising-star Squaresoft.  The sales certainly reflected that too, as it sold over two million copies worldwide and is regarded as one of the best RPGs on the system (and of all-time) by both die-hard fans and more casual ones alike.

However, with Square splitting with Nintendo shortly thereafter to develop RPGs on the Playstation, hopes for a sequel were quickly dashed (and as of 2019, one still hasn't happened despite several Square games being released on newer Nintendo platforms).  Nintendo did employ their second-parties to try and create some memorable RPGs of their own, with the first being Paper Mario for the Nintendo 64; a game which I have played but never got very far in (and struggle to remember much about).  Still, it was a modest success, kicking off a new franchise that continues to this day, with its latest entry being Paper Mario: Color Splash for the Wii U, released in 2016.

For my money, though, the best game in the Paper Mario franchise is its second entry on the Gamecube, which took the gimmicks of the original Paper Mario and took them to new heights of innovation.  This is evident right away even in the visual style; it retains the same style of having 3D backdrops with 2D characters on, but goes to even greater lengths to resemble a pop-up book, with frequent instances of secrets being revealed by "unfolding" or peeling away elements of the backdrops, or 2D elements popping out to form 3D ones the player can interact with (like stairways).  It adds a lot of fun and suspense to the game when even mundane screens that seem secretless can give way to hidden things in a creative way.

The focus on minigames returns from earlier efforts too, with combat integrating a surprising number of them.  This is evident right out of the gate, as Mario's two main attacks (jump and hammer) each have an associated minigame to allow the player to deal more damage; pressing the button right as a jump attack lands will cause Mario to land another hit, while holding the control stick left and releasing it as the lights on a small gauge fill will deal extra damage with the hammer.  One can also block attacks in similar fashion - pressing the A button just as an attack impacts will reduce damage taken or even negate it entirely.  TTYD takes things a step further, too - the player can perform a "Superguard" by pressing B instead.  This move is trickier to time, but successfully pulling it off will fully negate damage to Mario and damage the enemy instead, making it a very rewarding tactic for more advanced players.  One can also gain an advantage entering a fight by landing a hit on an enemy in the field, which will cause Mario or his partner to inflict some damage on them before the first turn begins; enemies can do this to you too, though, so caution is advised to prevent that.

Combat is made a lot more dynamic in Thousand Year Door, though, thanks to a number of new mechanics.  The first of these are the Special Moves, which have a variety of effects - healing Mario's party, damaging enemies, stopping time temporarily and so forth, for a number of Star Points (the player begins with a maximum stock of 1, but the total increases as they collect the Crystal Stars over the course of the game).  These all take the form of minigames, with Sweet Treat (the healing effect) having the player throw stars at targets; hitting mushrooms will restore HP, flowers restore FP, and Poison mushrooms will stun the player for a few seconds, robbing them of time to get the most out of the effect.  Another example is "Art Attack", which allows Mario to move a cursor around the screen and draw circles around enemies, inflicting 3 damage each time he does so (which can add up to quite a lot if one gets good at the game).  Star Points in turn are refilled via the Audience mechanic, seen below.

A significant new gameplay element surfaces too, thanks to the Audience mechanic.  All battles in the game take place upon a virtual 'stage" in front of an audience, and the player's actions during battle will affect this in various ways.  If they're doing well in a fight (countering attacks, consistently landing timed hits, et cetera) more audience members will arrive, and subsequent attacks will bolster one's Star Power gains by a significant amount; however, if they're doing poorly, audience members will start to leave and Star Power gains will be negatively affected.  On occasion, the audience will interfere in the fight too, doing things like making a character invisible (and immune to damage) for a single turn, throwing objects at Mario or his enemies to damage and/or stun them (though the player can avoid damage with a well-timed button press), toss him a powerup on occasion, or even cause other audience members to be distracted or flee the theater.  The audience varies wildly by the type of area the player is traversing, with hostile audience members becoming more prevalent in later areas of the game and as one's overall level increases.

Another mechanic can affect this too; namely the "Bingo" mechanic that appears early on in the game.  Basically, each turn the player takes causes a random icon to appear in the upper-right corner, and if they get two of the same type, a minigame is played where they try to match up the third symbol via a slot reel; if they do so, they'll gain positive effects like restoring one's HP (mushroom), FP (flower), Star Power (star) or filling every seat in the audience (Shine Sprite).  However, if three Poison Mushrooms are matched, all three stats will be cut by half and all of the audience will flee, putting the player at a significant disadvantage (and giving the player much incentive to fail that roll on purpose).  This does add a significant luck element to the combat, but can also allow one to turn things around in a pinch.

The secondary characters in the game have been somewhat revamped, too.  Unlike the original Paper Mario, each now has their own individual HP values (instead of being disabled after a single hit) and can even gain benefits from certain badges, making them into more fully-fledged party members.  Each has a field command (like being able to blow up certain obstacles to clear a path or leap gaps Mario couldn't clear on his own), and in battle they all have their own advantages and disadvantages; for example, Kooper the Koopa has an innate Defense bonus, making it tougher for weaker enemies to damage him, but this is offset by him having low HP and being able to be "flipped" by jump attacks, leaving him helpless for a turn.  Knowing the particulars of enemies in an area, and which partner to use to counter them, quickly becomes and important part of the game's strategy.

The badge system from the original Paper Mario returns too, and as in that game, it works as both a means of character customization and difficulty-tweaking.  Some badges are simply there for customization purposes and/or humor value (like ones that can be equipped to change Mario's color scheme to that of Luigi, Wario or Waluigi, or change in-battle sounds), while others grant new special moves or bolster Mario's stats, granting extra attack damage, defense or HP.  Others still play into the risk-versus-reward element of the game, such as making timed hits harder to pull off but boosting Star Power gained from them, dealing more damage when HP is low, or causing timed attacks to do more damage but nullifying damage inflicted by non-timed attacks.  This essentially allows less-experienced players to give themselves an advantage and more advanced ones to take greater risks to maximize rewards, allowing it to be a game that appeals to both crowds.

That philosophy as a whole is also what allows all of the Mario RPGs to work - they're deep enough to appeal to die-hard gamers while user-friendly enough to not alienate younger or less-experienced ones.  Thousand Year Door is certainly no exception, bringing a sense of humor and a visual style that seems to cater to a younger crowd, yet having enough to offer discerning RPG fans that it won't alienate an older audience either.  That, plus just being a fun game to play in general, make this a standout RPG for the Gamecube and still my favorite in the Paper Mario franchise.  Well worth a look if you can track down a copy. 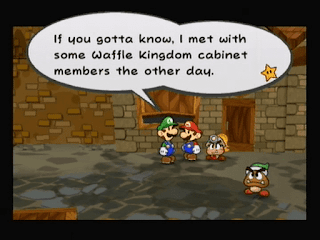 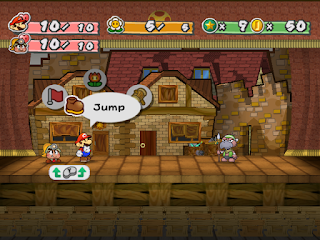