Wizardry: Tale of the Forsaken Land

One of many original games released under the Wizardry label by a Japanese company but one of the few to get a release in the west, Tale of the Forsaken Land is what one would expect from the name - challenging first-person dungeon crawler action.  But does Racjin manage to still manage to make that format fun in the Playstation 2 era, or is this just a forgettable game made to cash in on a popular name? 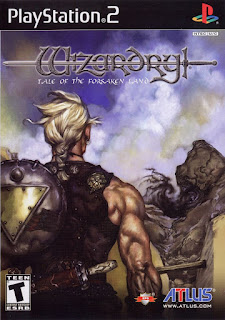 Wizardry is a quintessential early computer RPG franchise - one of the very first to emulate Dungeons and Dragons in format and design, as well as the first to feature color graphics and a party-based experience.  While it would soon be outshone by games like Ultima and the Gold Box series (mostly because its engine and graphcis started to look very dated in comparison), the franchise still trucked on for over a decade, getting its final entry in 2001 with Wizardry 8.  Sir-Tech's last surviving branch dissolved not long thereafter, though, and the franchise mostly came to an end in the west.

However, Wizardry found a very different life in Japan, with numerous spinoff games coming into existence under a variety of companies as late as 2017, very few of which were ever localized for the rest of the world.  Tale of the Forsaken Land is one of the few that was, released in 2001 by then-niche RPG publisher Atlus and developed by Racjin, a fairly unknown company that has a few cult classics to their name (probably the best-known being the Snowboard Kids games for the Nintendo 64).

From a quick glance, though, it's plain to see that the feel of the Wizardry franchise was kept alive for Tale of the Forsaken Land.  As in most of the western games, the game is primarily centered on a single dungeon, there is a hub-town that one interacts with via menus, it takes place in a first-person perspective (albeit now with 3d graphics for enemies and the dungeon itself), and even the familiar character creation elements return - the same classes, stat requirements and alignments come back once more.  Basically, if you played any version of the first few Wizardry titles, you'll feel right at home here.

Other iconic elements of the franchise quickly show themselves too.  Leveling up only occurs "between adventures", IE in town, so you'll probably want to make frequent trips back to rest and power up before getting too far in.  Spells are broken up into distinct levels, which each get their own number of castings between rests, so you'll want to save them for when you're in particularly tough battles.  Enemies often appear in large groups, and like your own, have a front and back row, with the latter largely being out of reach unless you have ranged weapons or spells to attack them (or clear the front row first).  Enemies will often kill a character in only a few hits, making upgrading armor and shields frequently to get more defense and evasion a key part of strategy.  One can also freely change classes between ones they have the stats and alignment requirements for, with a few more powerful ones (Ninja, Samurai and Knight) having particularly high requirements, but a strong combination of abilities.  And of course, a big part of the game is finding unidentified items that may be magical or otherwise rare/expensive, taking them back to the shop for appraisal, and then selling or equipping them accordingly.  They seem to spawn randomly on any given floor, too, so retreading dungeon floors in search of more loot is often a worthwhile endeavor.

Tale of the Forsaken Land does quickly take steps to make itself distinct, though.  Technology for those old floppy disk based games didn't allow for a huge amount of storytelling within the game itself, but being a PS2 game, that's obviously not a problem anymore.  To that end, there is a running storyline throughout Tale of the Forsaken Land, with a lot of characters to meet and recruit and side-quests to undertake along the way (often going hand-in-hand with one another).  In addition to joining you for quests, characters do have distinct personality traits, and staying on their good side is often necessary to keep them in the party; some will get angry with you if you battle friendly enemies, for example, while others hate particular enemy types and will like you more if you kill a lot of them.  This also quickly ties into a major mechanic called "Allied Actions", which are parties your group can collectively take once their trust in each other is high enough.  These include things like Double Slash (two allies attack a single enemy in tandem, getting a bonus to accuracy and damage), Hold Attack (one character immobilizes an enemy while the other hits them - great for enemies with high evasion) or Warp Attack (removes the entire front row from the fight for a turn, causing any attacks targeted at them to miss).  A lot of these aren't particularly great, but some prove to be extremely powerful and are well worth getting.

Something else new is the spell crafting system, which is a bit of an odd beast but adds quite a lot of depth to the game.  One can find stones within the dungeon that teach spells or, if they already have that spell, upgrade it to make it more effective.  Enemies frequently drop items that can be used in their own right to recover HP, cure status effects or deal damage, but oftentimes these can be taken back to the shop in town to craft new spell stones or Vellums.  Vellums are essentially rarer and more powerful spells, often requiring you to find a recipe and then craft them from three (often rare) components.  They tend to be quite useful, though, so it's often worth the effort it takes to track them down.  If you're finding a lot of a particular stone, you can also disassemble it back into its base components to craft something else if you wish, so this does end up being a pretty big component of the game's strategy in the long run.

Some elements of the game's design are also relatively strange for first person dungeon crawlers of this type.  One thing that surprised me is that encounters are actually visible in the dungeon - enemies appear as a hazy outline that you can evade or outmaneuver if you don't wish to fight at that time.  I was somewhat surprised to find that opening chests isn't solely for the thief class, either, instead being governed by a minigame where you have a few seconds to push a sequence of buttons; in fact, I started the game as a Cleric and got a personality trait related to successfully unlocking chests, which felt a little bizarre for a D&D-like. Thieves do still play an important role in disarming traps, though, so you'll still want to have one (or a Ninja) around for that purpose.

For an early PS2 game running off a CD, TotFL has quite a distinct aesthetic too.  While the dungeons and enemies are in 3D, the game does make use of detailed 2D sprites for story characters and cutscenes, and they all work well with the game's dark setting and overall bleak mood.  Music fits in with this too, keeping the atmosphere dark and foreboding, yet urging you to move on to uncover the story's mysteries.  The translation in the game is somewhat clunky, but it works well enough to keep the game moving and never becomes distracting, so I didn't mind it too much.

So, does Tale of the Forsaken Land live up to the legacy of the Wizardry series?  I certainly think so.  It maintains the challenge and dungeon-oriented elements of the franchise while working in some components of Japanese RPGs as well, emphasizing characters and storytelling as a key part of the experience.  Both components are balanced quite well, presenting a game with a lot of depth and challenge and a good narrative to keep the player motivated even when it can be frustrating to make progress at times.  It may not be the Playstation 2's most highly-regarded RPG, but I certainly think it's one worth a look for any serious fan of old-school dungeon crawls. 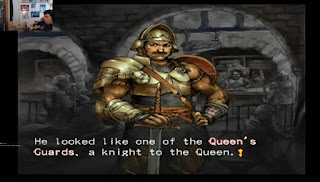 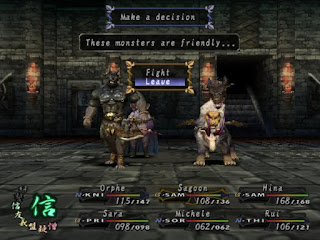