Developed by Westwood and released by SSI not long after Pool of Radiance made a big splash, Hillsfar tried to go for a more arcadey role-playing experience.  But did it succeed in doing so, or is this a poor attempt to mesh RPG elements into an action format? 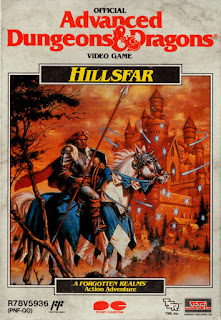 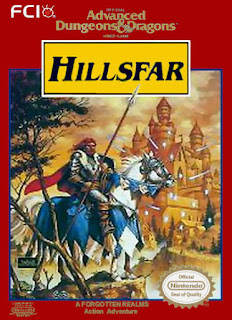 With the advent of the NES and the runaway success of Zelda, RPGs proved they could successfully work in a more action-oriented design, providing just as much depth and storytelling potential as any slower, menu-driven experience.  In the years that followed, numerous other games would attempt to mesh action elements into RPGs with varying degrees of success, and a lot of them would become groundbreaking classics in their own right.

One of the earliest attempts I can think of at combining action and RPG elements on home computers was Hillsfar.  While it does retain some elements of its Dungeons and Dragons roots (you get to create a character and select their class, and your choice determines what guild hall you accept quests from throughout), the game for the most part does its own thing, being a largely open-ended adventure reminiscent of a very early Elder Scrolls.  Indeed, between missions you're allowed to basically do whatever you like - fight in the arena, practice archery, visit bars, visit areas outside of town or break into buildings to search for gold and items.

That all sounds awesome on paper, but unfortunately Hillsfar isn't nearly as captivating as one might expect from that description.  It does make a strong first impression with its detailed graphics and smooth animations (particularly as computers of the time weren't exactly known for such), but the gameplay itself is relatively basic, being primarily comprised of a handful of simple minigames.  Combat takes place only within the city's arena and has the player block and attack with keys on the numpad (three each for left, right and "special" maneuvers).  Customers in bars and random townspeople on the street will occasionally dispense clues for particular opponents, though I generally had more luck just mashing left and right attacks constantly than trying to employ any kind of strategy.  Horseback riding is equally simple, having the character run down a short path leaping obstacles or blowing them away with "Wands of Blasting"; each fall will cost them some HP and may injure or kill their horse, which they will then have to pay to replace.  Archery is a little more involved (though it requires a frustrating amount of precision), getting tougher as the game progresses with swinging and vanishing targets that award more points, as well as the ability to shoot a rat or bird instead of the target for bonuses, earning you some gold if you manage to rank on the scoreboard.  Probably the most inspired of these is the lock-picking minigame, used to break into buildings and the chests therein - you get a selection of eleven lockpicks (each with two shape patterns) and have to match 3 or more of them to the locks' tumblers before time runs out.  Messing up too many times will break your picks (requiring you to pay to repair or replace them) and tumblers will frequently "jam", which just wastes time as you have to use the right pick on it multiple times to force it open.  Still, it conveys an effective sense of tension and puzzle-solving and is actually a bit of fun for a short while, though before long I started forcing locks open with Strength and using Knock Rings for particularly stubborn ones as it was much more expedient to do so.

By far the most common mini-game is entering various areas to search for chests and items - whether breaking into buildings and houses or simply burgling sewers and a handful of areas outside town.  These are somewhat randomly-generated mazes full of chests and traps, and you're given a short time limit to go searching for your objective or loot chests for money.  Once your time hits about 1/3 of the total, the exit appears in a random place and you must get to it to escape.  Being touched by a guard causes your time to drain faster, and if they make contact while your time is at zero, you get booted out and the guards take any money you've collected (and may force you into an arena battle).  However, you can find randomly-placed scrolls to temporarily stun the guards and slip past them, which can buy you a few extra seconds to escape.  Again, this is fun for a bit, but disappointingly shallow - NPCs seen in the buildings pose no hindrance to you whatsoever (in fact, you can't interact with them in any way), the only traps that exist are "sleep traps" that knock you out for a few seconds or teleport traps that send you to a random location, and there simply isn't much to it beyond that (aside from occasionally having to locate a hidden passage in a wall as part of a quest).

More problematic is the fact that the numerous minigames throughout Hillsfar are not really tailored to your choice of class at all.  Regardless of who you're playing as, you'll probably end up doing all of these tasks at some point as part of your questline, often multiple times.  Clerics and Magic-users don't get any unique minigames at all; in fact, they don't even get to cast spells outside of doing tricks at taverns, which is pretty disappointing.  There are also very few weapons and no armor to find; most that you do use are simply provided for a particular quest or minigame and then taken away immediately after.  If you pick any non-Thief class, you'll still have to do a lot of breaking and entering even though you don't have lockpicks - meaning you'll either have to spend tons of money on Knock Rings, force every lock or hire an NPC thief who takes half the gold you find as a fee.

Beyond the questlines for each guild, there really isn't a lot to do either.  As mentioned, it's fun for a bit to challenge yourself with arena combat or archery or plundering random houses, but there is very little variety in what you can find, and the few items there are only exist to aid you in further minigame sessions.  Interactions with townspeople are minimal, primarily consisting of bar events (few of which serve any real purpose) and random encounters where they will sell you clues, healing potions or Knock Rings for a bit of gold.  There's just a staggering lack of variety overall, which is more than a little disappointing for D&D-based RPG, let alone an action game.

So why does the game exist if not to tell a good story or at least provide some engaging gameplay?  Well, that's the interesting part.  Your character does still gain experience and levels through arena battles and completing the various tasks set before them, and Hillsfar is compatible with two of the Gold Box games (Pool of Radiance and Curse of the Azure Bonds), letting you import your characters from those games into this one and export them back out.  Essentially, it's a way to let you power up your characters a bit more, either because you've run out of substantial quests to do in Pool or you want to gain a bit more experience and HP before starting up Curse.  It's basically what would be a handful of mini-games or short sub-missions in a modern game, except that back in its day it was a full-priced, boxed piece of software in its own right.  Ouch.

Hillsfar was at least a relatively ambitious game for its time period, attempting to introduce some mini-games and action elements to create a unique, less dice-oriented Dungeons and Dragons experience.  But with only four barely-adequate questlines, a lack of substantial RPG elements beneath the hood and very little variety in what it does have to offer, it gets tiresome to play rather quickly.  Even the developers seemingly knew this, as once you get some skill at the various minigames you can go through an entire questline in only a couple of hours and then move on to something else.  So while it may not be especially good, Hillsfar is at least aware of its shortcomings, being built as a brief experience that doesn't overstay its welcome.  If you want to gain some extra experience and a little more HP for your Pool of Radiance/Curse of the Azure Bonds characters this is a less tedious alternative to farming random encounters in those games, but only to a point.  Hillsfar may also be worth a look on its own merits as an interesting experiment and because it has some nice visuals for its time, but if you're looking for a more substantial minigame-driven RPG experience, you have plenty of better options. 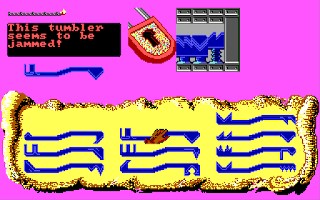 Publisher: Strategic Simulations, US Gold, Pony Canyon, FCI
Released: 1989, 1993
Platform: Amiga, Atari ST, Commodore 64, DOS, NES
Recommended Version: The NES version is a lackluster port overall, having less-detailed and muddier graphics, awkwardly stiff movement and speeding up the time limit for the lock-picking minigame, making it significantly harder.  This version also lacks any ability to import or export characters (to say nothing of the fact that Curse of the Azure Bonds never had a console release at all), making playing it at all rather pointless.  The most easily-found version now is the DOS version available through GOG, which is also compatible with the Gold Box games on the same platform, so that's the one I'd suggest playing.
Labels: ⭐½, 1989, Full Reviews
Newer Post Older Post Home