The second game in BioWare's Baldur's Gate series, which made several tweaks to the original's design and, after an expansion was released, concluded its running story. But does Baldur's Gate prove to be a worthwhile adventure for D&D fans, or is this simply a lackluster sequel to a game that hasn't aged particularly well? 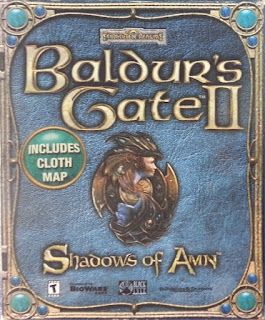 The original Baldur's Gate was a game renowned among PC gamers and D&D fans in general for its interesting storyline and strict adhesion to second edition rules, making it a classic to both camps.  It was not without its faults, however - the overall slow progression and some downright cheap encounters with enemies that could spam various debilitating effects (charm, stone, web, etc), paired with an extremely long duration for all of them, made combat downright frustrating at times and frequently all but forced the player to cheat in order to get by.

Baldur's Gate 2 continues this trend, adding some new effects to the mix like confusion and level drain (and my personal least favorite, psionic attacks from mind flayers that leave the player stunned for an extremely long time and vulnerable to their instant-death brain eating attack).  However, the game does show some improvement in this regard too, shortening the duration of many of the nastier statuses and taking care to give the player tools to counter most of them (like a Level 4 Lesser Restoration spell to counter level drain which did not exist in the tabletop game).  Many pieces of equipment also grant resistance or immunity to particular effects, and several class kits do as well, so there are tools to counter a lot of the nastiness one encounters.  Still, some fights are extremely cheap and all but require the player to use some underhanded tactics to succeed, so the big overarching issue from the first game is mitigated to a degree, but by no means eliminated.

Class kits are a new addition to Baldur's Gate II, adding much to the game's flavor and replayability.  Essentially, each of the generic D&D classes now has one of several variants the player can choose from, granting them some new abilities in exchange for others. For example, the Cavalier kit for the Paladin is completely immune to fear, charm and poison, gets innate fire and acid resistance and can cast Remove Fear once a day to aid the party, but cannot use any missile weapons.  Some offer a relatively reasonable balance of advantages and drawbacks (like the Kensai kit for the Fighter, which can deal out massive damage but cannot use any armor or ranged weapons) while others are virtually straight upgrades (nearly all of the Thief, Cleric and Bard kits).  One even has the option to retroactively apply them to characters imported from the previous game, which is a nice touch (though it comes with the drawback of averaging out their HP if the player employed savescumming to maximize their HP gains).  It can also allow for some amazingly powerful Dual Class combinations, like the Kensai dialing to a Mage and getting several spells to offset his weak defense, or a Cleric that gets the high weapon proficiencies and special abilities of a Berserker.

Some other significant improvements quickly show themselves too.  There is a much greater focus on party member interaction now, with each character one encounters being tied to their own questline and having several unique dialogs with the player and one another.  This can be interesting at times (like Viconia's character arc which, played properly, can convince her to change her alignment), and at other times it can be deterimental; some characters outright hate one another and will fight to the death if kept in the same party for too long.  One even has romance options with many of the female characters (though only one male character if playing as a female character yourself, disappointingly).  It ultimately doesn't have a huge effect on the overall gameplay most of the time, but it is nice to have the option and for characters to have alternate endings depending on the player's choices.  The antagonists in BG2 are significantly more nuanced too, proving to be effectively well-written and with a legitimate strong element of tragedy to them instead of the rather cartoonish ones of the first game.

The gameplay is much more focused as well. The world map is no longer nearly as expansive, with more interesting areas than just "woods with slightly different enemy sets" and fewer random encounters with generic goons on the way to a destination.  Sorely lacking from the original game, the player is now properly rewarded for completing quests with a large sum of experience for each character, not just a lump sum spread across the entire party.  Another nice bonus is that the player is afforded a unique questline depending upon their chosen class - thieves get to run a thieves guild, bards can run a playhouse, fighters get a castle (and must keep their peasants safe and taxes reasonable, lest they revolt), to name a few.  The rewards for these tend to be pretty useful and worth undertaking, as well as satisfying from a storytelling perspective, and it's another nice element of depth and replay value for the game.

Like many D&D games, Baldur's Gate doesn't offer a lot in terms of player alignment roleplaying choices.  There are only a small handful of times when being "evil" causes a storyline to change significantly (mostly in the form of your allies leaving the party), and there is very little benefit to choosing an evil character.  A few quests may yield useful alternate rewards, but for the most part, you're just doing more harm than good to your own experience by playing an "evil" character, as letting your reputation drop too low will cause you to constantly be attacked by bounty hunters and result in much higher prices in shops.

Baldur's Gate II is a logical extension of the first in every way, proving to be a much better experience on a storytelling and design front but every bit as frustrating as its predecessor managed to be in a lot of ways.  Combat still requires you to exploit loopholes to win at times, the roleplaying element of the game is stronger but still not amazing, and a general lack of balance and polish leads to a game with some very uneven difficulty and a lot of save-scumming being required to succeed, as well as some pretty game-breaking exploits for the player to abuse once they're aware of them.  Still, the game's stronger elements shine through to make it a very entertaining experience, and in my book, still the finest game Bioware has ever created. 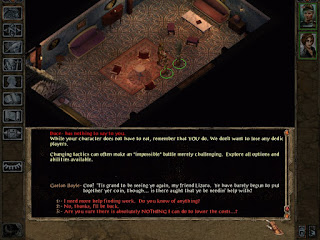 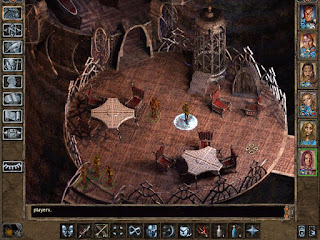 Developer: BioWare, Black Isle Studios, BeamDog
Publisher: Interplay, Atari
Platform: PC, iOS, OSX, Android, Linux, Switch
Released: 2000, 2012, 2013, 2014, 2019
Recommended version: The 2013+ update (dubbed "Enhanced Edition") makes some quality of life improvements like widescreen resolution support and a much-improved AI, as well as programmable party AI and some enhancements like new characters (most of whom can be romanced), quests and kits to play as, which only adds more depth and replayability to a game already swimming in it.  It also includes an alternate story mode (The Black Pits II), the original expansion and bonus disc content packed in, making it a definitive release.
Labels: ⭐⭐⭐½, 👑, 2000, Full Reviews
Newer Post Older Post Home