Probably best known today as the inspiration for the Fallout franchise, as well as for the huge gap between it and its sequel (26 years - a world record as of this writing), Wasteland was a highly acclaimed RPG in its time as well. But does it still hold up today, or is this simply one CRPG that is best left in the past? 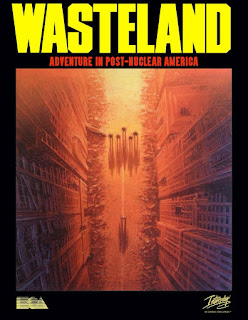 Wasteland, originally released across numerous computer formats in 1988 (though it finished development in 1985) was a game that quickly amassed a cult following.  There were a number of reasons for this, but a large part was that it managed to provide a surprisingly tabletop-esque experience (drawing inspiration from the developers' other games such as Tunnels and Trolls and Mercenaries, Spies and Private Eyes).  It was among the earliest as well to feature a persistent world - the player's actions are saved to the game disk and retained as they leave towns, and if they wish to start the game completely from scratch, it is necessary to do a fresh install of the game from the master disks included in the box.  This also has an unfortunate side effect, however - if one leaves the current map or radios in whilst in an unwinnable state, they will not be able to continue the game, forcing a restart.  Particularly problematic in some areas, where unseen hazards (ie radiation and random enemies) can easily devastate the party.

As in many games of this type, the player is free to create their own party at the start, generating four players with randomized stats and their choice of skills to face the dangers of the game's world.  There is a slightly odd spread of stats here, though; Strength, IQ and Luck are fairly self-explanatory, but the player is also given Speed, Agility and Dexterity as separate stats, and they all do separate things - Speed determining one's turn order in combat, Agility determining attack evasion and Dexterity determining accuracy with ranged weapons.  IQ is easily the most important one, however, granting the player more points to spend on skills which form the foundation of everything they can do with any degree of incompetence.  Each level the player earns grants them two more stat points to allocate however they wish, and there are a total of 181 levels to earn (though it's nearly impossible to go above 40 or so in a single playthrough).

Skills are another odd lot.  There is a large focus on combat in Wasteland, but most weapons and the skills thereof are not worth bothering with in the least.  Puglism, Pistols and Rifles, for example, are almost completely worthless, doing far less damage than the Brawling skill (which lets one equip virtually any item as a weapon, though obviously things like crowbars and axes are much more effective than, say, books).  Rifles are slightly better, though not by much, while the Combat Shooting skill that appears in some versions of the game (notably the DOS release) is completely useless, having no functionality programmed in.  Other skills may be used in very few or even exactly one place (Metallurgy, Sleight of Hand, Cryptology) while others still are extremely useful throughout the game.  These include Swimming, Climbing, Picklock, Medic and Doctor, which are so vital that you'll be using them almost constantly.  Indeed, most versions of the game even acknowledge this by including a Macro system, allowing the player to assign a sequence of commands to an F key and play them back later by pressing it, saving them the trouble of pressing long sequences of buttons each time they want to make the attempt.

Throughout the adventure, the player can return to base at any time to create a new character if one in their party dies (which is very likely given how dangerous the wasteland can be).  One can also recruit a number of playable characters throughout the game, each with their own skills and stats.  However, there is a bit of personality programmed into them, meaning that they may refuse to use skills or give back equipment you've traded to them, so you can't always rely on them as "mules" or anything of the like.

Combat in Wasteland is frequent and honestly not that great.  The action is largely automated, having the player select a group of enemies in the combat and then the rest playing out on its own through descriptive text, having your characters auotmatically attack as many times as they are able to and everything being handled through invisible dice rolls.  This, plus the incredibly high rate of encounters in some area, as well as limited resources in the game as a whole, quickly turn the entire game into a war of attrition where the player simply wants to get through dungeons as quickly as possible rather than fight through everything in their path.  That said, it is surprisingly hard to actually die, especially in the early levels.  If one's HP drops below a threshold (roughly -10 or so) they are put into "Critical" status, at which point their condition will steadily degrade until they are dead or they get medical treatment.  However, once they drop low enough to be knocked unconscious, enemies will start to ignore them and shift their attacks to other targets instead, which can result in lengthy segments of the entire party being KOed, waking up and restarting the battle until they win or all get dipped below the tipping point.  This becomes less common as enemies start getting highly-damaging attacks, but for the first part of the game it's very hard to actually die.

Being released on floppy disks, storage space for the game was scarce, which resulted in much of the game's story being relegated to the manual in the box.  Frequently throughout the game, one will be prompted to "Read Paragraph ##" in order to know what's going on in the story.  This also serves as a form of copy protection in places, as the paragraphs are laced with many misleading passages that contain bogus passwords that can mess with the party in strange ways or, in worst cases, make the game unwinnable if they put them in.  It also contains a completely unrelated story in out-of-order sequence, which can provide a bit of extra fun once the player finishes the game.

Still, in spite of its dated elements and some not-so-great combat, it isn't hard to see why Wasteland was such a popular game in its time.  Its bleak yet humorous atmosphere was very much copied over to the format of its successor franchise (Fallout), the story told here is quite a good one for the period, and the amount of puzzle-solving within was on par with games like Ultima 4 and 5, released around the same period.  It may not hold up as well as some of its contemporaries, but serious genre fans owe it to themselves to give it a look.  Maybe not finish it owing to its ridiculous difficulty and the sheer tedium and frequency of its combat, but try it out at least. 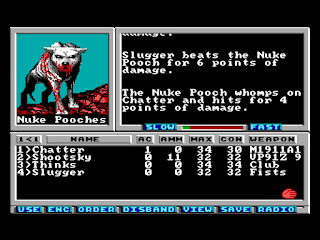 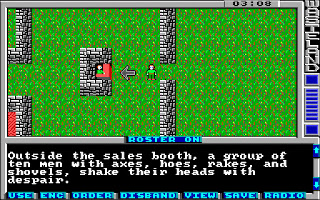 Publisher: Electronic Arts
Released: 1988
Platform: Apple II, Commodore 64, MS-DOS, Windows, OS X, Linux
Recommended Version: The version released on Steam (playable on OS X, Linux and Windows) is the DOS version, running on a heavily modified version of DOSBox that allows for enhanced graphics (particularly enemy portraits), adds music and even lets the player click on the window to open up the manual paragraphs and even have them read out loud via narration, making it much more accessible than the old floppy disc based versions.  There are even build-in options to allow for multiple player saves and to refresh the world to its original state should one become stuck. That's the one I'd recommend playing, as it provides for a much smoother experience.
Labels: ⭐⭐½, 1988, Full Reviews
Newer Post Older Post Home