Curse of the Azure Bonds

The sequel to Pool of Radiance, which worked in some improvements from a gameplay perspective and introduced some engine improvements to the formula.  But do several months of work show off in the final product, or is Curse of the Azure Bonds just a disappointment compared to what came before? 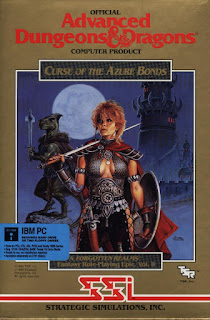 The first game in the franchise was a success (selling over  250,000 copies across all platforms), so naturally a sequel would soon follow.  Curse of the Azure Bonds, released the following year, was a relatively standard sequel, introducing a few improvements and new features but, being based on the same engine, was almost identical in terms of design.  It is also loosely based on a book simply named "Azure Bonds", with two of the heroes of that story making a cameo at one point as temporary allies.

Some improvements do quickly show, though.  While the option to create custom portraits for your characters is gone, the game otherwise features slightly improved graphics (though still limited to 16 colors), animations and sound effects, making it a bit more visually interesting than its predecessor.  The interface is also marginally improved, most notably with the addition of a "Fix" command that causes the party to automatically use any healing spells they may have, then rest to restore them; using this once or twice is usually sufficient to heal the entire party back to full without having to manually cast all those spells yourself (though, of course, you do run the risk of being attacked while resting as per usual).  Finally, the world map has been reworked, having you travel between preset waypoints via a menu interface, though you may get attacked on the road by brigands or bounty hunters; you can sometimes avoid this by choosing to travel off the path, though this carries some risks in itself (like being attacked by monsters).

Some of the D&D rules present in the engine were updated too.  Most prominently, one can now create a Paladin or Ranger as a playable character, and each gets some innate abilities - The Paladin can Lay on Hands to heal once per day, cast some low-level Priest spells beginning from Level 9 and gets an inherent Protection from Evil effect, which gives nearly every enemy in the game a penalty on their rolls against them.  Rangers, on the other hand, get a bonus against giant enemies (more than one tile big), plus they can cast some low-level spells like Detect Magic, Faerie Fire and Invisibility to Animals.  If one is playing as a half-elf, they can also be multi-classed with the Cleric class if one wishes (though due to the old D&D1 level restrictions for all non-human classes, this isn't recommended).  Ironically, both of these make the basic fighter class all but obsolete, having basically all of their advantages and then some with no real drawbacks.  One can also "Dual-Class" human characters - essentially giving up one class for another, though regaining the abilities of the class they abandoned once their current classes' level exceeds the previous one.

Another cool feature is that one can import characters from Pool of Radiance and Hillsfar (if for some reason you played that game).  Though you unfortunately don't get to keep any equipment you earned, you do retain your stats, abilities and experience total, which, if you earned enough, can allow you to level up almost immediately as soon as you dig into this game.  The level cap is raised, letting you reach 12 with most classes (11 for mages, 10 for Clerics) and cast spells up to level 5.  As in the previous game, some are virtually useless (Protection from Good - there are very few, if any, good-aligned enemies) while others are absurdly useful (Hold Monsters, Cone of Cold and Slay Living).

Of course, being a higher-level campaign than the first, the game is significantly more challenging than Pool of Radiance was.  You'll encounter more than a few enemies that can poison you (death until they are revived by a Stop Poison spell), enemies love to spam Hold Person to disable your party and leave them vulnerable to an instant takedown, and some encounters are just downright nasty.  The most iconic representation of this to me was a scripted fight with a Beholder - always a nasty customer in D&D, and it's no exception here, as they get four attacks a turn, at least two of which will always cause instant death or petrification if you fail a saving throw.  The latter may actually be worse, as I found no way to counter that effect other than to return to a town, visit a temple and pay a hefty amount of cash to undo it.

As in the first Pool of Radiance, I never once found myself wanting for cash; enemies drop rather ridiculous amounts of gold, jewels and jewelry, and I quickly found myself having to leave behind large amounts of it just to keep my party unencumbered.  However, later in the game, one does finally get the opportunity to put some of that cash to use for things other than healing.  You can actually buy spell scrolls, wands and potions at some shops, which can prove very useful for longer dungeons where you're likely to run low on spells and not have a safe place to rest.  These can prove quite handy as well in one of Azure Bonds' new features; namely that nearly every town in the game has an optional dungeon to visit, each of which has a semi-randomized quest to complete in it.  While not nearly as complex or engaging as the main story, they nonetheless have some quite useful rewards and give a lot of XP, making them useful for powering up before the player attempts the final gauntlet.

In short, Curse of the Azure Bonds is a standard sequel, making some subtle improvements, providing a bit more in terms of gameplay and depth and telling a pretty decent story that carries on where the first left off.  The first game was lauded for its groundbreaking design, and while the sequel may not carry that same prestige, it's a well-made and worthy followup for anyone who enjoyed the original.