Released to celebrate the Final Fantasy franchise's 30th anniversary, World of Final Fantasy is one one part fantasy RPG, one part Pokemon-style monster trainer game.  But does it provide enough content and depth to stand tall in the worlds of two RPG giants, or does it simply tip over and crash? 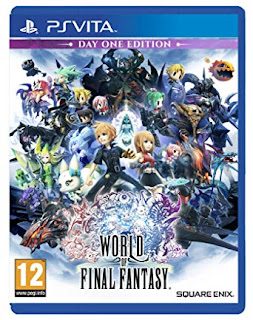 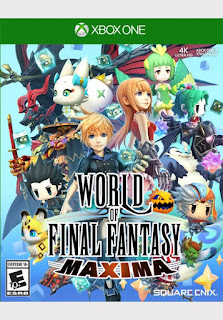 It seems that sooner or later every long-running series gets a celebratory fan service game, and Final Fantasy is certainly no different in that regard; in fact, it's had several.  But while some are mediocre (Final Fantasy IV: The After Years) and others are downright disgraceful (All The Bravest), World of Final Fantasy sets out to do something unique.

The game still does utilize quite a few of the familiar Final Fantasy elements - right from the get-go, you'll be seeing numerous familiar monsters, moogles, chocobos and quite  a few music cues, settings and characters from earlier Final Fantasies.  At its core, though, the story is a unique one, starring two new protagonists (a brother and sister named Lann and Reynn) and following an original story as they traverse the world of Grymoire.  It is built on a familiar archetype, though - Many of the inhabitants of this world are chibi-styled "Lillikins", while the antagonists are primarily more humanoid characters called "Jiants" who conquer the land via their ability to control Mirages (monsters), and seemingly only the protagonists have the power to stand against them.

This leads into the first major gameplay change; namely that it's a Pokemon-styled monster collection and training game.  Monsters encountered in battle can be captured and added to the player's party via a mechanic called 'Imprisming' when they are reduced to a vulnerable state.  Unlike Pokemon, however, this isn't simply limited to weakening them through battle and hoping the dice land in your favor; instead, each type of monster you encounter has differing ways in which they can be made vulnerable to an Imprism.  Often this means using a particular attack or element type on them, but it can also have slightly more obscure conditions, such as having them be the last hostile monster standing, reflecting their magic spells, using mutiple attack types, or even healing them first.  The Libra spell, which identifies monster stats, weaknesses and Imprison conditions, remains a very valuable asset throughout the game.

The game's interface is somewhat simplified too.  By default, combat utilizes a more efficient command menu with four shortcut commands mappable to each monster, and the player can quickly select from individual shortcut menus via the D-pad (though if this menu isn't to your liking, the traditional-styled menu can also be made the default in the game's options).  Combat itself retains the franchise's familiar Active Time Battle system too, so those used to the 90's-era Final Fantasy games will feel right at home.

Mirages' ability pools are similar to the skill trees seen in Kingdom Hearts 3D, with monsters gaining AP as their levels increase,which they can then spend to unlock nodes on their respective grids in order to boost stats, gain new abilities or evolve to stronger forms.  The two protagonists, on the other hand, have something slightly more akin to Final Fantasy VII's Materia system; they have no abilities of their own, but can equip "Mirajewels" that grant them spells and abilities, with more slots being unlocked as their levels increase and certain tasks are completed.

Some creative new mechanics quickly show themselves too, though.  The most prominent of these is Stacking; basically, you stack up to three of your characters atop one another, which effectively combines their stats and move pools into a single, stronger whole. Though you get fewer turns doing this, a stack is much more resilient and versatile than its component characters, making this an invaluable strategy for surviving tough battles.  However, if a stack takes too many hits in a battle, they can be tipped over, forcibly separating the stack into its component characters until the player recombines them or wins the battle.  Enemies are also frequently found in stacks and get similar bonuses when they do so, which adds another layer of strategy to things.  It is a frequent problem, though, that huge groups of smaller enemies will almost always topple your towers after only a turn or two of combat due to getting so many more turns in than you, which often gets you into a drawn-out and frustrating loop of getting knocked over and dizzied, then trying to rebuild your towers and clear them out before they peck you to death.

The gameplay itself is primarily aimed at a younger audience, and as a result features relatively simple dungeon designs and puzzles.  That said, there are still numerous optional quests with items to find, shortcuts to discover and plot threads with classic Final Fantasy characters to experience to keep things engaging for more experienced players.  Many NPCs have the usual assortment of fetch and monster-hunt quests, while some monsters have abilities that can uncover hidden items or pathways -having a Mirage with the Wander ability in the party in certain environments can allow them to uncover secret items that otherwise would not be accessible, while having one with Flight allows the party to move over small gaps they otherwise couldn't, for example.  Most dungeons also contain at least one special switch, which can open new paths if certain conditions are met.  Most often, this entails building stacks with certain requirements, such as having a Weight of at least 8 and statistics (such as elemental resistances) above a certain value.  These are rarely required to progress, but often lead to secret areas with useful items, so it is worth collecting monsters to see what each one contains.

Befitting the colorful storybook style of the visuals and the more accessible gameplay, World of Final Fantasy's tone aims to be lighthearted and fun above all else.  To that end, the protagonists' interactions are often silly, with Lann coming off as generally moronic and Reynn as the long-suffering 'straight man' of the pair.  Dialog with other characters is equally silly, with countless references and puns and a self-aware tone that even breaks the fourth wall at times.  It can get to be a bit much over long play sessions, but I found most of the humor to work surprisingly well, especially as the voiceover in the game perfectly captures the timing of jokes and is well-acted enough not to get grating.  The localization and voice over teams really did an outstanding job here, and it's more than a bit ironic that a spinoff game built for a younger crowd does a much better job with these elements than most of the main-line Final Fantasy games.

World of Final Fantasy is an homage game at its core, but does much to set itself apart from others in that category.  Its Pokemon-styled collection-oriented gameplay gives it a lot of content, the writers do a very respectable job in creating a humorous tone, and the story, while simple at its core, provides enough fan service and twists to keep both long-time series fans and more casual RPG players invested.  So whether you're a series veteran or a relative newcomer, World of Final Fantasy is one that should keep you hooked for a while. 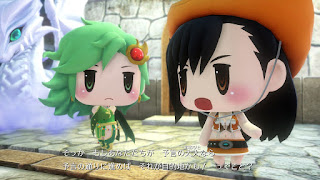 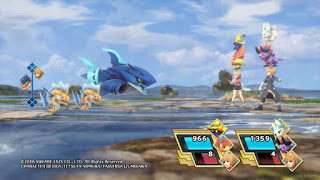 Developer: TOSE, Square Enix Business Division 3
Publisher: Square Enix
Platform: Playstation 4, Playstation Vita, PC, Switch, XBox One
Released: 2016, 2017, 2018
Recommended version: All versions of the game seem to be pretty much identical, but I would recommend getting one of the updated "Maxima" versions if possible; these add many new features and gameplay tweaks over the base versions, as well as numerous new cameos and quests to experience.  This is available as a DLC upgrade for the PC and PS4 versions, but comes as a free inclusion on the XBox One and Switch versions of the game.