A remake of a cult classic Sega CD RPG that introduced the franchise to a new console generation and gave it some substantial upgrades in the process. But did a 2D fairy tale RPG manage to hold its own in an era where 3d graphics, cyberpunk and urban fantasy were the new norm, or did it just sink into obscurity? 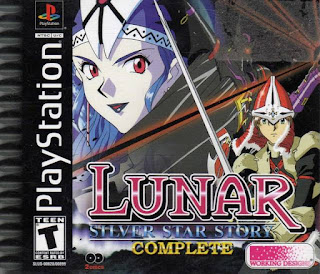 The Lunar games were some of the most influential JRPGs of the early 90s - niche to be sure, being released only for the Sega CD platform, but they were among the first to show western audiences what the CD format could do for the genre.  Not just providing a solid adventure with a lot of substantial content (and not just grinding to pad length), but high-quality music, voiceover and FMV to give them more of a cinematic feel.  Lunar 2 in particular is regarded as one of the best RPGs of the 16-bit era and has a cult following that continues to this day.

All that being said, I didn't play the original Sega CD games back when they were new.  While I knew of them from game magazines and catching glimpses at stores,  I wasn't really into RPGs yet at that point.  On top of that, I couldn't afford a Sega CD addon at the time, so I mostly stuck to the stock Genesis and the Super Nintendo.  However, once the Playstation era rolled around and remakes of the games were announced, I saw an opportunity to jump on board and see what I had missed in the last generation.

Luckily, what I saw did not disappoint.  Not only was it a breath of fresh air to see an RPG in that era that used good old 2D sprites instead of rough-edged, pixelated PS1 polygons, but even in the in-game cutscenes were hand-drawn and very good quality besides; maybe not Ghibli quality, but enough to rival any big-budget anime of the era.  Also unusually for the time, it featured voice acting of surprisingly good quality, giving the characters a lot of personality and adding perfectly to the humor - even in the non-voiced lines, it makes it easier to imagine the voices and timing of the jokes.

Combat retains a traditional turn-based style, though with some slight changes.  First is the fact that your hand-to-hand oriented characters can get multiple attacks per turn, and can even hit different targets with them, keeping their power level roughly on par with your more magic-oriented ones (unlike many RPGs, where mages tend to start out weak but dominate in the endgame).  Second, the game has a slight strategy RPG feel in that for said melee attacks, one must actually approach an enemy on the field and attack them - if they are out of range, then you just spend a turn getting closer and that's it (which can put you at a disadvantage when the enemies get their turns).  Defending also allows you to manually reposition your characters, which proves to be an essential tactic in some battles (particularly against bosses with large area-of-effect attacks).  Throughout the game you are constantly accompanied by Nall, who does factor into combat too - from time to time, he will revive a downed character with 1 HP and allow them to get back into the fight.  While only sporadically useful, this is still better than Nall's contribution in the Sega CD version, where he simply gave useless advice against monsters.  New to this version as well, Nall will revive any downed characters at the end of combat, thus preventing them from missing out on any experience points gained - generally a good thing (though if for some reason you want someone to miss out on gaining XP, you now have to command that individual character to run from the fight).

Something else that was unusual for the time was that Lunar's bosses do not have fixed stats - instead, their stats are all based on multiples of Alex's level, so they effectively power up as he does to provide a consistent challenge (and reduce the player's reliance on over-leveling).  Some unscrupulous players found that they could exploit this by having Alex flee from every fight and simply let the rest of the party gain experience instead, making every major battle beyond the first hours of the game into a total joke.  Probably little surprise that this mechanic was left out of the sequel in favor of more traditional fixed-stat bosses.

Being published by Working Designs had its benefit for the game too; before virtually every game with a well-known name attached had big-box Special Edition releases, Working Designs paved the way.  Silver Star Story was probably their most ambitious one yet with additions like a cloth map, soundtrack CD, hardcover manual and even variant covers for the disc box.  Those who preordered the game got a Ghaleon punching puppet (though the Alex puppet, planned for release alongside the PC version, sadly never saw the light of day), and even the player's guide for the game was unusual in that it was a high-quality hardcover release.  Naturally, this all came at a cost, retailing for significantly higher than the average Playstation game and being relatively rare and expensive nowadays.

On the other side of that coin, Working Designs is a divisive name among RPG fans, making some controversial changes to many of the games they localized for western territories.  While not quite on the same level as Silhouette Mirage 's overhauled gameplay or having to spend Magic Experience to save one' s game in Lunar 2 for Sega CD, they nevertheless make for a substantially different experience than the Japanese release.  In general, enemy HP is about 10 percent lower, their damage output is 20-40 percent higher and XP and silver rewards were lowered around 15 percent, making combat tougher and the game require substantially more grinding.  All chests containing silver had their contents halved as well, and bosses were made significantly stronger, getting higher multipliers based on Alex's level and generally taking much longer to beat.  The translation also added many jokes (including several pop culture references and some generally juvenile moments) and a couple of puzzle solutions were obscured (mistranslated or left out completely) , making them tougher to solve.  I've never personally played the original Japanese release so I don't have a first-hand frame of reference, but I didn't find any of these to detract greatly from the overall experience.  In fact, the lowbrow jokes actually felt rather at home considering that the game also famously has quite a few fan-servicey moments, including allowing the player to collect "bromides" of the female characters to provide some cheesecake, and view bath scenes of both male and female characters with mild nudity (though the female baths are much tougher to access, being placed after one of the game's most dangerous dungeons).

But regardless of whether you agree with Working Designs' changes or not, there is no denying that Lunar is a solid update of a classic.  It provides enough old-school appeal for long-time RPG players, but enough charm, story and memorable characters to appeal to newer ones as well.  The 2D artwork in the game is downright gorgeous, the music is catchy and well-composed, and even the voice acting holds up remarkably well - while obviously not on the level of modern anime and game dubs, the cast is clearly trying and having a lot of fun doing it (with the post-credits blooper reel only providing more evidence of that).  Lunar is a fun and captivating fairy tale in video game form, and its charm will last for the ages. 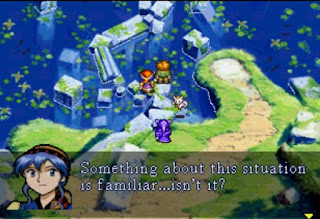 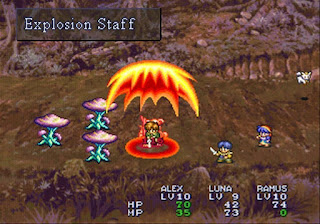 Developer: Game Arts/Japan Art Media, SoMoGa (iOS version)
Publisher: Kadokawa Shoten, ESP, Working Designs
Platform: Sega Saturn, Playstation 1, Windows iOS
Released: 1996, 1997, 1998, 1999, 2012
Recommended version: If you can get ahold of a copy, the Playstation version is the one I recommend.  While the Saturn version apparently has cleaner spritework (little surprise as the Saturn was primarily built as a 2D system) and the Windows version has higher-quality FMVs, neither is available in English.  The iOS port is a hybrid of several versions of the game (based on the Saturn version's source code, using the graphics of the Windows port and having the script/VO of the PSP remake) and seems to be comparable in quality at a glance, though I have not played it firsthand.

(There are two remakes as well - Lunar Legend for GBA and Lunar: Silver Star Harmony for the PSP - that I will review at a later date)