An odd dungeon crawler with some survival horror elements developed by a relatively unknown company and released by Chunsoft, who have made a name for themselves lately by releasing numerous high-profile visual novels.  But does this latest collaborative effort pan out into a worthwhile adventure, or is this just another forgettable take on two already saturated genres of gaming? 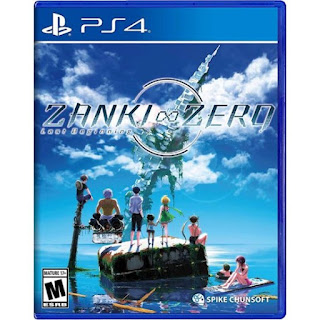 Lancarse isn't a name known to many, but they have worked on a few RPGs in their time.  Notably, they contributed to the first two Etrian Odyssey games, which were very much old-school dungeon crawlers in the vein of Might and Magic or Wizardry.  Later they worked on Shin Megami Tensei: Strange Journey, another first person dungeon crawler that brought the series back to its origins while mixing in enough original elements to keep things fresh (and, as per series tradition, being monstrously difficult).

Zanki Zero is another game in that vein, primarily taking place in a first-person dungeon crawling perspective, though the Chunsoft influence is evident in the game as well.  Sharing many developers with the Danganronpa franchise,  Zanki Zero revels in its bizarre concept and atmosphere, following the exploits of eight survivors in a destroyed world as they attempt to revive humanity and discover the truth behind the cataclysmic event that destroyed the world.  Each of the eight chapters in the game follows one of the eight characters' stories (embodying the seven deadly sins and "original sin"), and each is quite a personality in their own right.  From the "bondage artist" Ryu Mikajime to Sachika Hirasaka, the upbeat inventor girl with prosthetic limbs, their stories are fun to watch unfold.

Many of the game's key mechanics, as well as its story beats, are told via "Extend TV", a show which appears frequently on television sets throughout.  Hosted by Mirai and Sho Terashima (a sheep and a rather perverted boy, respectively), they explain the player's missions as well as the journeys of the eight playable characters and their stories, as well as providing a lot of dark humor (with Mirai frequently being decapitated and Sho making off-color remarks at almost everything).  They're almost always fun to watch, though they do tend to get repetitive, particularly in the early stages as it's about 2-3 hours of introduction before any proper gameplay starts.

Zanki Zero is a dungeon crawler at its core, with the player in a first-person perspective controlling four characters at a time and making their way through a dungeon populated with enemies and puzzles to solve.  It is a strange one, though, in that it's not really "turn based" in the traditional way.  One can double-tap the movement key to dash through areas and traverse them quicker or throw objects from one's inventory with the Square button (which can activate switches or damage enemies from a safe distance).  While enemies do move and attack on predictable cycles, the player does not, allowing them to do things like step out of range of enemy attacks to avoid damage entirely (necessary for many of the bosses, who do insanely high damage even with armor).  Attacks are slightly more limited, though, with each operating on a cooldown timer that varies between weapon types and character builds.  Basically, it's more of a game of timing, knowing when to approach and attack and when to retreat to evade damage, than it is a traditional turn-based RPG with a static combat system.

Zanki Zero also totes itself as something of a survival game, and like most in that genre, it's centered around a crafting and base-building system.  Each of the dungeons has randomly-spawning resources, which can be taken back to base and used to upgrade facilities there, or turned into equipment and items for your characters to utilize.  Even basic cooked food (like jerky) will give a greater stamina recovery effect than raw meat, for example, though obviously those requiring higher skill levels and more ingredients will grant better effects.  There is a catch to this, though - characters have food allergies that can kill them if they eat a food with that particular ingredient (the first time; they will suffer heavy damage every subsequent time).  Upgrading bedrooms allows you to rest and recover HP (and two characters can share a room to build bonds and get benefits while in the same group), and... well, Zanki Zero may be the only RPG I've seen where building and using a toilet is a key part of gameplay.  Tying into that, each character has a "bladder" stat that steadily increases (greatly boosting the player's Stress and inflicting Stench status if it hits 100), and using the toilet will reset it to 0.  As one completes dungeons they will unlock upgrades to the Extend Machine, which allows them to earn new bonuses as they revive their characters.

Character development in Zanki Zero has some odd twists of its own.  One of the central mechanics of the game comes from the fact that, being clones, your eight characters rapidly age, going through stages of their lives over the course of days.  A freshly revived character begins as a Child, then after a few days becomes an Adult, then Middle-Aged, and Senior before expiring after the thirteenth day ends.  A "day" passes each time you reach a new floor in a dungeon or rest (either in your base or a dungeon).  Each stage of life has its own benefits and drawbacks; Child characters can regenerate HP over time but have relatively low stats, while Middle-Aged characters get a defense bonus.  Adults deal more damage with their attacks and have relatively high stats overall, and Seniors have weaker stats in every category except for attack, but have less cooldown on their attacks and regain Stamina over time.  For all of these reasons, balancing one's party between the various life stages, and carefully managing one's time, become key elements of the game's strategy.  Death is an inevitable part of this experience too, but each character also gets "Shigabane" - permanent benefits - each time they die.  For instance, dying of old age will permanently give a a boost to several stats, while being killed by enemies in each life stage will boost their lifespan by an extra day.  Basically, the more your characters die (and the more ways they die), the stronger they will become in the long run.

All of these things contribute to an experience that is both twisted and unique, but perhaps a bit too much so for western audiences; Zanki Zero had some content changed or removed when being localized to meet Sony and Valve's content standards.  Several scenes with risque imagery or dialog, particularly those involving characters in their Child forms, were rewritten or removed entirely.  Some artwork was also redrawn or cropped to avoid such scenes, and the box art was apparently altered as well.  To make up for this, though, the gameplay has been tweaked and balanced in numerous ways to make for a smoother experience, some UI improvements were introduced, and the swimsuit DLC from the Japanese version was included with the base game for free.

Zanki Zero is a unique but shallow spin on the dungeon-crawler format, mixing unique mechanics in with survival and puzzle-solving elements to create a challenging, if monotonous experience.  If you don't mind that, its bizarre setting, compelling characters and a twisted sense of humor will help to keep things engaging, and the traditional dungeon crawler elements keep it grounded enough to be intuitive to long-time RPG fans.  Plus, it's just nice to see a post-apocalyptic game with bright, colorful island visuals instead of a dreary-burnt out landscape, so it gets some points for that in my book too.  If you're a die-hard fan of old school dungeon crawlers, Zanki Zero might be worth a try. 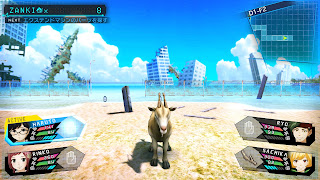 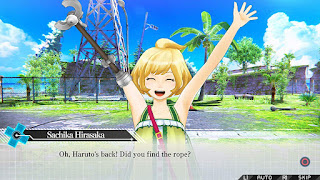 Developer: Lancarse
Publisher: Spike Chunsoft
Platform: Playstation 4, PC, Vita
Released: 2018, 2019
Recommended version: All versions of the game seem to be pretty much identical, but the Vita version is not going to be localized into English, so western players who can't read Japanese are out of luck with that one.