Final Fantasy Tactics marked a bit of a departure for the series, being more of a turn-based tactical warfare game than a typical Japanese RPG.  But does this step away from the norm pay off in the end, or does this army just march right off a cliff? 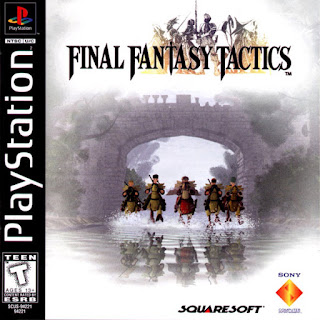 Final Fantasy Tactics came out in the wake of Final Fantasy VII's success on the Playstation, and marked the first real off-shoot of the series proper.  While there was little connection between the existing games save for similar themes, gameplay elements and some story tropes, Final Fantasy Tactics marked the franchise's first attempt at establishing a cohesive, recurring world.  It laid the framework for the "Ivalice Alliance" series that several following games would also take place in - Vagrant Story, Final Fantasy XII, and FFT's own sequels would take place in the Ivalice universe as well, telling their own stories but adding to the contiguous lore and history of the world Tactics established.  Little surprise, then, that this world was the brainchild of Yasumi Matsuno, who previously made his name with the Ogre Battle/Tactics Ogre franchise of games - complex real-time strategy and turn-based tactics games that took place on a complex historical backdrop and often had extremely in-depth mechanics and numerous endings to unlock.

As one can expect from that, FFT is quite a bit more complex and involved than a typical Final Fantasy battle system.  As in most turn-based strategy games, the battlefield itself plays a large role in one's tactics for a particular mission - trees in forests can block arrows, water slows character movement (and makes characters more vulnerable to lightning spells), cliffs and tall walls can be difficult or even almost impossible to traverse, and fields often have a number of traps - from poison needles to damaging spikes to ones that can even cause characters to lose a level when stepped on.  Even small things like the direction a character is facing or the distance between the makes a significant difference in strategy - targets are often easier to hit from the side or back, and casting spells or using abilities at long range often makes them take longer to execute, meaning the enemy has a chance to move aside and avoid it entirely.  The twelve Zodiac signs play a significant role in strategy too, with some signs being more 'compatible' with others and character attacks or spells having more or less effect as a result.

The core gameplay is definitely on par with the likes of Matsuno's Ogre games, but the design of the narrative itself is still concretely Final Fantasy in structure.  There is still only a single linear story path and ending, and the few character choices you're given ultimately have little impact, mostly just altering a single mission objective (such as having to save an NPC or simply defeat all foes on the map).  Side missions do exist, though these rarely take the form of battles proper - instead, you simply assign a few of your units to go on an away mission for a set period of time (typically 7-14 days) and after they return, they will gain some AP, money and report back on the result of the mission.  These do at least afford a way to earn "treasures' that are call-backs to previous Final Fantasy games (such as finding a "Black Materia"), though these are just small easter eggs and not actually usable items.

In similar fashion, the job classes one can utilize are very much based in Final Fantasy lore.  The Knight class can equip heavy armor and weapons and break enemy equipment, White Mages cast healing magic, Black Mages cast destructive magic, Oracles and Time Mages serve a more supportive role, and so forth.  No story events are required to unlock particular classes, though one must attain certain Job Levels in lower classes to attain higher ones - sometimes more than one.  For example, the Archer class can only be enabled after reaching the third Job Level as a Knight, while the Samurai class requires Level 4 Knight, Level 5 Monk and Level 2 Lancer to be acquired first.  Similarly to Final Fantasy 5, one can also pay AP to acquire particular skills from a class, then carry them over to another once they change their job.  Going beyond even Final Fantasy 5, though, there are a total of four extra slots to equip abilities to - a secondary command list, a Reaction command, a Passive command, and a Movement command. This makes for all sorts of interesting possibilities, from Monks who can equip heavy armor to Lancers who can teleport to Summoners who have a much shorter charging time due to equipping the Time Mages' Quick Charge ability, letting them devastate the battlefield much more effectively.  As in Final Fantasy 5, this quickly becomes the most interesting element of the game, allowing for some truly powerful (and at times, hilariously broken) combinations.

"Broken" could also aptly describe Final Fantasy Tactics on the whole, with many instances of uneven difficulty, particularly in the later stages.  Some of the more infamous battles in the game happen back-to-back, and should one be under-equipped or not have enough resources to brute-force their way through the coming fight, they may be forced to roll back to a previous save or, in worst case, restart entirely.  The late game also gets particularly unbalanced, with each battle quickly becoming a 'clash of the glass cannons' - whoever lands the first hit will usually defeat their opponent in a single blow, and winning battles becomes more a matter of speed than any actual tactical clout.  Even the game is seemingly aware of this, handing you extremely powerful characters and pieces of equipment to give you a fighting chance against what is to come.

But in spite of some lacking balance and a questionable translation, Final Fantasy Tactics is a very fun and memorable game.  Its dark storyline pulls surprisingly few punches and has quite a few moments of genuine horror and shock.  Its characters are complex and morally ambiguous in many cases, and its world lore and storyline is a genuinely interesting one to get immersed in.  FFT's gameplay, while far from the best-balanced in the series, is inspired and fun throughout, always providing a challenge that makes you want to keep playing rather than give up in frustration, and finding the various quirks of the job system and customizing your characters just right often allows you to do just that.  It may not be the series' most polished game, but pound for pound, it may just be its most entertaining. 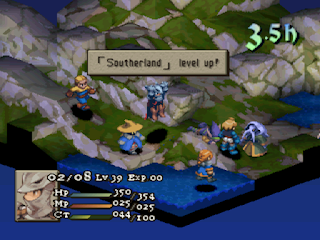 Developer: Squaresoft
Publisher: Square, Sony Computer Entertainment
Platform: Playstation 1, Playstation Portable, PSN, iOS, Android
Released: 1998, 2007, 2011, 2015
Recommended Version: I am partial to the original PS1 release personally, as I felt that the War of the Lions enhanced ports were lacking in several areas.  Notably having a lot of lag at times, poor sound quality for some effects (particularly summons and bigger spells) and a translation that feels downright cringe-worthy, with copious amounts of purple prose and stilted dialog.  The PS1 version is available on PSN as of this writing while the PSP, iOS and Android versions are all ports of War of the Lions.