A spiritual successor to the long-neglected Diablo franchise worked on by a few of Blizzard North's former developers, Torchlight set out to recapture its magic while working in elements to bring it up to modern standards.  But does Torchlight succeed in bringing back the fast-paced lootfest style of fun, or is this just another forgettable take on the format? 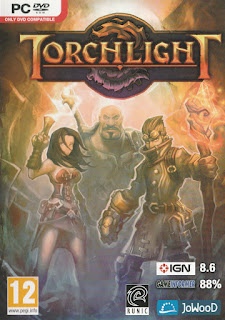 Since Diablo's explosion of popularity in the mid-90s and its even more popular sequel in 2000, numerous imitators have tried to cash in on the format - Westwood had Nox,  Microsoft had the Dungeon Siege trilogy, Interplay had Baldur's Gate: Dark Alliance ...hell, even Raven Software and Marvel got in on the format to a degree with the X-Men Legends games and the Ultimate Alliance series.  So, it was little surprise that Torchlight would attract attention, given both the prevalence of the genre and the fact that some members of Blizzard North helped bring it to life.

It is clear from the start that Torchlight was built to be a spiritual remake of the first Diablo in a number of ways.  The overall setup is similar - a town besieged by corrupted monsters coming from an underground mine - and even the three playable classes are analogous to the original Diablo's - Berserker, Alchemist and Vanquisher are roughly equivalent to the Warrior, Sorcerer and Rogue, respectively.  Some elements of Diablo 2 do appear as well though, like the item crafting system (to a more limited degree) and the three skill trees per character that allow for vastly different character builds and give a significant amount of variety and replayability.  For example, Vanquisher builds can be centered on ranged weapons, melee weapons and defensive spells to bolster their relatively low HP, or simply setting traps for the enemy.  Spells are not exclusive to any one character class, however - similar to the first Diablo, any character can learn and use them, though some builds are geared more strongly toward using them than others (the Vanquisher, for example, gets a Mastery skill for spells that boosts their effects and lowers MP cost).  Some other welcome changes are present as well, such as being able to reuse slots in armors (by destroying the gems in them) or simply recover gems and reuse them in other armors (which requires destroying the armor itself).

A clever new feature in Torchlight is the pet system.  Similar to the NPC followers in Diablo 2, the protagonist is always accompanied by a pet that can fight alongside them, given limited equipment and spells, and even pick up and carry loot.  Better yet, the player can send their pet back to town to cash in any items in their inventory, saving the player some work of having to go back to town and sell it manually.  Of course, this does put the player at a temporary advantage for a couple of minutes of time while the pet makes the trip, but as it allows for uninterrupted gameplay, it's generally worth it.  One also has the ability to pass on a single item from an older character to a newly created one, serving as a "New Game Plus" of sorts.

Other efforts have been made to give the game more replay value too.  In addition to the randomized loot that is a staple of the series, a new dungeon called the "Shadow Vault" is unlocked after the game is completed once.  This is essentially an endless randomly-generated dungeon, complete with random quest objectives given out by two NPCs standing outside its entrance.  The PC version is also quite moddable, with the developers releasing a versatile tool called TorchEd that allows players to test out dungeon chunks they create in real-time, as well as letting them create new models, animations and even quests to give the game more content.

In spite of all its successes, though, Torchlight does have a major stumbling block; namely that it has no multiplayer of any kind.  Online co-op doesn't exist, and even local play isn't an option; this is strictly a one-player game.  While Torchlight does its best to provide a lot of content, it is a bit odd to see a genre built on the multi-player experience not have any option for it.  Probably little surprise, then, that this was one of the most highly touted features of its sequel.

In short, Torchlight is a spiritual successor game that follows in Diablo's footsteps in many ways, including being overshadowed by its sequel, which had more features and generally was a smoother experience on the whole.  Still, it is worth a look for fans of action-RPG lootfest games, as its smooth interface, aesthetics reminiscent of Warcraft III, surprisingly good voiceover and a strong soundtrack that draws more than a few cues from its inspiration make it a polished and enjoyable adventure regardless. 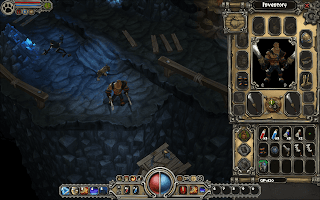 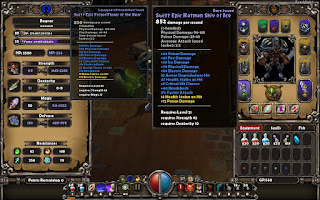