Team Andromeda's swan song for the Sega Saturn, Panzer Dragoon Saga was an ambitious cinematic RPG built to rival the likes of Final Fantasy VII; however, it was doomed to obscurity in the west owing to Sega's decision to only sell the game via mail order in extremely limited quantities.  But did the Saturn faithful find a game that was worth a quest in itself to acquire, or is this buried piece of gold really just an overhyped chunk of pyrite? 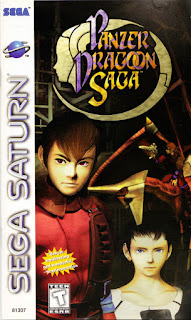 Panzer Dragoon was one of the most heavily touted titles among Sega Saturn fans, having great atmosphere and story for a relatively simple rail shooter with some severe technical limitations (most notably a very low frame rate that often fell into single digits during larger boss encounters).  Even fewer appreciated its sequel, which continued the storyline and added massive technical improvements, with many considering it a title to rival the likes of Star Fox 64.  Fewer still had the chance to appreciate the franchise's third entry, as Sega only released it via mail order and, despite completely selling out within hours of launch, adamantly refused to do more than a few short printing runs.  As a result, the game's English version is now almost impossible to find without shelling out large sums of cash.  Even those who know Japanese face hurdles, as the Japanese version of the game has some sort of lockout that prevents it from being played on an American system, even with an Action Replay or similar devices that work for nearly other game in the system's library.

It's all a bit of a shame, really, as Panzer Dragoon Saga is quite an experience to behold, expertly combining action elements into an RPG narrative.  One strange artifact of this is the game's interface, which is carried over from the series' rail shooter origins - opening chests and interacting with almost anything is done by locking on and "shooting" it, whether on foot or riding your dragon mount.  This actually threw me at first as you don't travel through caves by simply flying into them - you lock on and shoot the cave, which cues a cutscene of your character flying in, then the game transitions to the next area.  Strange for sure, but you'll adapt to it pretty quickly.

It is also clear from the start that this was intended to be the Saturn's big RPG title, geared up to compete directly with Square's Final Fantasy franchise.  The game is lavishly produced, with every line of dialog featuring full voiceover (in Japanese with English subtitles) and quite a lot of FMV footage to carry key story scenes - indeed, it's only after roughly 30 minutes of animation that you get to any actual gameplay, and when later cutscenes come up, they tend to go for quite a while.  Thankfully the game does allow you to skip nearly every FMV and in-engine dialog scene you encounter, so you aren't stuck watching them over and over again if you die on a boss that happens to be after one.

Saga is a standout game in its aesthetic design, too.  Unusually for the time, the game doesn't consist of simple 3D models on flat 2D backgrounds, or even vice versa; Andromeda instead opted for full 3D environments and character models, and they actually look quite amazing despite the Saturn's limited hardware capabilities - deep canyons, flowing waterfalls, rippling lakes with fish swimming beneath the surface, odd metallic architecture, a giant desert with flowing sands, and bizarre but elegantly-designed machinery and fauna are just a few of the many sights to see.  All of this is further compounded by compounded by a moody score that adds tremendous atmosphere to the environments, fully immersing the player in a dark but beautiful fantasy world totally unlike anything else on the platform.

Of course, one of the big stumbling blocks for "cinematic RPGs" was that the gameplay tended to suffer, as the experience quickly became more about showing off overlong, flashy animations than providing a smooth gameplay experience.  Panzer Dragoon Saga thankfully hits no such issue, elegantly combining a movie-like presentation with a fast pace and a surprisingly strategic bent.  At a glance, combat is somewhat similar to Final Fantasy's ATB system, with the player able to build up to three "charges", then spending said charges to fuel their attacks or "Berserks" (spells). Normal attacks come in two flavors - the rider can fire his gun at a single target for more focused damage, or the dragon can fire homing lasers at random targets - useful against groups, though the lack of precise aiming means it isn't something you can always rely on.  Berserks work like typical RPG spells, dealing elemental damage, deflecting attacks, restoring HP, and other useful abilities.

Two unique elements come into play in combat, though.  First is that the player can freely move their dragon around the enemy formation with the D-pad, coming to stop in either in front of them, behind them, or to either side.  They want to do this because enemies have much more dangerous attacks when the player is in certain zones (marked in red on the radar), and in others, the enemy may only be able to use weak attacks or even not be able to attack them at all (marked in green).  However, enemies can also force the player to move to a disadvantageous position, and the player's charges will not fill while they are in the process of moving (by their choice), meaning that maneuvering  too much will leave them unable to take actions.  Many enemies also have weak points that can only be attacked from certain angles, often requiring the player to put themselves in a disadvantageous position to exploit them; however, if they are relatively conservative with their movements and charging, they can easily move into range and unleash a battle-ending assault before the enemies have a chance to retaliate.  Taking minimal damage and using moves as little as possible keys into another part of the game's strategy - the ranking system.  Simply put, the more efficiently you defeat enemies, the better your Rank, and the more experience and money you will earn.  Enemies will also not drop items unless the player gets a Great or Excellent rank, so figuring out how to effectively defeat even mundane foes is a key element of the game.

Another element of strategy comes toward the end of the first disc, allowing a surprising degree of customization for one's dragon.  The player is granted the ability to freely adjust their stats, balancing between Attack and Spirit or Defense and Speed.  Not only this, but tweaking these stats will dynamically change the dragon's appearance, which is quite a cool sight to behold on the Sega Saturn.  Moreover, this also affects the dragon's growth - tending toward one stat with more than 150 points will change the dragon's form to Attack/Spirit/Defense/Speed, while remaining relatively centered will keep them in Normal mode; this affects what Berserks they will gain as the player levels (with Normal granting random Berserks from all four camps).  Each form also grants abilities that cost no BP, but can be activated by spending three bars - Normal form regains HP, Spirit regains BP and Agility cures all status effects, to name three of them.  This adds an element of strategy to battles too, as the player can dynamically adjust their dragon's stat balance mid-fight so that they can, say, push their Attack power up during a relatively safe moment, then move their points to Defense when a boss is about to use a big attack.

It took me many years to finally get the chance, but after playing the game, there is no doubt left in my mind why Panzer Dragoon Saga is the definitive cult classic RPG for the Sega Saturn.  With its excellent presentation and atmosphere, an innovative combat system that is equal parts cinematic and strategic and an enthralling narrative reminiscent of a good anime series, Panzer Dragoon Saga is a hidden gem.  Not just for the Sega Saturn, but for role-playing games in general, remaining surprisingly faithful to the series' action-game roots while adding a grandiose, movie-like feel to rival any of Square's hits on the Playstation.  Sadly, its stifled release and prohibitively high prices on the second-hand market quickly made it into a game very few western gamers will get to experience on its native hardware, but those that do are in for a treat that fully shows off the kind of magic the Saturn - and '90s-era Sega developers - were really capable of.  It truly is a shame that their corporate masters were too busy selling empty hype and making consistently terrible business decisions instead of flaunting their developers' tremendous talents. 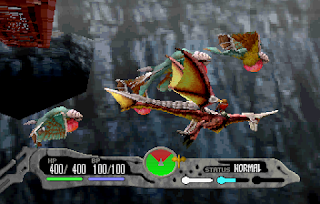 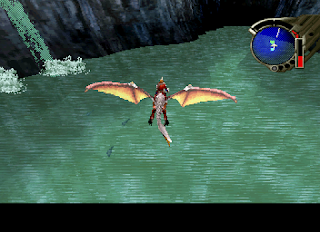