The Kingdom Hearts franchise has its first outing on the Nintendo DS platform, changing its format to a mission-based one while expanding the franchise's storyline once again.  But does it prove to be an entertaining game, or is this an entry you can safely skip? 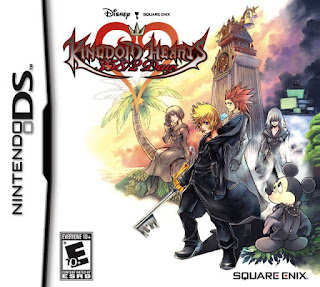 Kingdom Hearts: 358/2 Days (Pronounced "Three Five Eight Days Over Two") is the first entry in the Kingdom Hearts franchise to be released for a portable game system, as well as the first to utilize multiplayer-driven gameplay, putting as much emphasis on its co-op Mission Mode as it does on its storyline.  Up to four players can join together to complete missions and collect items which could be transferred back to the story mode for use there, and even in solo play, it afforded the player an opportunity to play as several characters from the franchise.  The most prominent of these were all of the members of Organization XIII, villainous characters featured prominently in previous entries Kingdom Hearts II and Chain of Memories.  A few others could be unlocked by completing certain missions and achieving certain ranks; namely Donald, Goofy, King Mickey, Sora and a version of Roxas that dual-wields Keyblades, as well as a new character to this game named Xion all became playable via this method.

Both story and mission modes take on a distinctly different format from earlier games in the series, largely taking part in the same handful of environments, though with differing areas closed off and different sets of mission parameters between them.  Whether that's finding marked places on the map, defeating certain types of enemies, or just taking on challenges like surviving for a minute against an aggressive horde of Nobodies, this is a game based around completing levels and earning ranks much more than a traditional RPG.  Compounding this, your party members also vary from mission to mission, either being controlled by the AI, and you have essentially no room to customize them or what actions they will take.  And only after completing a certain number of new missions will new ones unlock and allow you to progress through the story.  Getting high enough ranks will make new items available at the Moogle Shop, as well as unlock some new abilities for your character to make later missions easier.

I found this to be a rather disappointing turn for the series, especially since Kingdom Hearts sold itself on exploring the various Disney worlds, encountering their characters and uncovering numerous hidden secrets within them.  Most of that is gone in 358/2, with the only real remnant being the opportunity to find a number of hidden chests in any given mission.  Keyblades do return as well, albeit in the form of "Gears" that must be placed on the ability panel (more on it in a bit) and offer at least a bit of variety to one's combat strategy, such as doing more damage with midair attacks or bolstering magic damage.

Panels are a new system in place to affect character growth, and a relatively creative one at that.  Essentially, the player is given a grid with fifteen slots (with more being unlocked as the game progresses) and they can fill these slots with a number of abilities, items or spells.  Equipping an ability such as Block or Dodge will allow the player to use it freely, while Item and Spell panels are one-use items that will be removed from the grid (and one's inventory) after a single use.  Some panels take up more than one slot on the grid, though the player can fit other panels within the blank slots on that panel to give added effects; attaching a power panel to a Gear panel, for instance, will boost the attack power of that Gear.  Many of said panels are earned through missions, though the player also has the ability to build custom ones at the Moogle Shop by trading in various crafting items they find on missions.  This can prove to be cumbersome, though, as the player has a limited inventory and they can run out of available space, leading to them having to frequently manage their ivnentory mid-mission.  Strangely, one's experience levels also take up slots on the grid; if no Level panels are placed, they will effectively stay at level 1, so the player does often end up having to use a substantial portion of their grid space just to keep pace with enemies they encounter.

What it comes down to is that 358/2 Days is primarily built as a multiplayer action-RPG, allowing up to four players to team up, beat missions and upgrade their characters for later play sessions, that happens to have an offline mode with a storyline - not unlike Phantasy Star Online before it.  It works relatively well as a co-op game, but not so much as a single player experience; I quickly found myself getting bored of seeing the same locations and performing the same handful of short objectives over and over again just to progress the story slightly.  Fortunately, the PS4 compilations contain all of the cutscenes from 358/2, so you can simply watch that if you just want to catch up on the plot without having to play through 200+ similar levels. 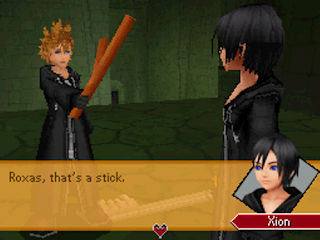 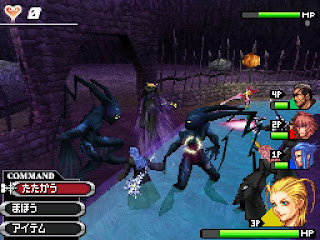 Developer: h.a.n.d.
Publisher: Square Enix
Platform: Nintendo DS
Released: 2009
Recommended version: 358/2 days is only available on the Nintendo DS.  While it is listed on the Playstation 4 compilations, it's not playable there; it simply contains the cutscenes from the game edited into a roughly four-hour movie.