The second game in the Ys franchise continues right where the original left off, keeping its gameplay mostly intact but introducing a couple of new elements to the mix.  But does it prove to be a worthy followup to the first game in the franchise, or just a token cashin sequel? 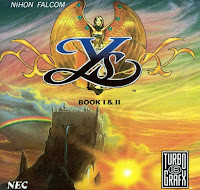 Ys 2 was a bit of a rarity among Japanese RPGs in that it continued exactly where the first left off; within moments of the first game's ending, in fact, as Adol finds himself on the floating island of Ys moments after defeating Dark Fact, the six books from his first adventure still in hand, and embarks on another adventure to save Esteria.  At first it even appears that the game starts off on the same foot, giving the player a minimal amount of money to buy equipment and a spot within easy reach of the starting town to level up for a bit.

It isn't long, however, before one finds a significant change-up to Ys II's gameplay; namely, the magic system.  Within only a short while of the game's beginning, the player is given the Fireball spell, and frankly, it's so powerful that it becomes the central focus of the game.  While the player does operate off of a limited magic gauge (and unlike their health, it doesn't regenerate over time), the fireball spell consumes only a fraction of a point with each casting, and when fully charged by holding down the button for a second or so, is powerful enough to destroy almost any enemy the player encounters in a hit or two.  One even acquires an item later in the game that causes fireballs to home on targets, so all one has to do is point Adol in the enemy's general direction and fire.   Basically, touch combat - and by extension melee attacks and weapons in general - rarely see any practical use in the game, which is a very stark contrast to the other games in the Ys franchise.  Even most of the game's bosses aren't exempt from this; attempting to attack them in close quarters will simply damage Adol while they take no damage themselves.  In fact, more than any other, Ys II exemplifies the Ys franchise's boss battles' occasional comparison to danmaku ("bullet hell") shooters as the player weaves between waves of projectiles and counters with their own.

Other spells do appear as well, though none see nearly the same level of use.  For example, the Light spell allows the player to see hidden passages and fake walls with hidden items behind (necessary at one point for a key item).  Return magic allows the player to quickly warp back to key areas they've already visited, while Alter magic allows Adol to turn into a Roo, which will allow him to slip past monsters and even converse with them to uncover clues and hear a bit more story; a pretty innovative idea for the time.  Time magic will freeze all enemies in place for a short while, allowing Adol to escape or attack unchecked (and it even works on a couple of bosses, though stronger foes will turn it back on you instead!) and finally, Shield magic will make Adol completely immune to harm while it is in effect, though it quickly drains one's magic meter while equipped.

All of these, in various ways, contribute to a game that is more involved than the first in many respects; the new spells add a bit more of a variety and puzzle-solving element than the first game's, which mostly just consisted of navigating mazes and finding the occasional key item to open a path forward with little variation.  In fact, it's also a rare example of an early RPG where one can't simply solve all their problems through brute force.  On more than a few occasions the player will have to turn into a Roo in order to converse with an NPC to progress; even a mundane enemy in a dungeon can trigger a plot flag at times or point them in the right direction, and the differing perspective the monsters offer is a rare bit of self-awareness for the genre, where monsters were little more than obstacles for the player to knock down.  While it's certainly not done on anywhere near the level of say, Undertale, it is at the least a unique take for the series and the genre as a whole.

While the game isn't much different from the first on a graphical level (especially in the later remakes where it's almost always bundled in with the first Ys game), it does at least retain the series' high standards of quality there.  The spritework in the game remains clean and gorgeously-rendered, with some creative and grotesque boss designs throughout.  The game's soundtrack is provided by Yuzo Koshiro, Mieko Ishikawa and Hideya Nagata, and once again lives up to the high standards for the franchise (and Yuzo Koshiro in general).

At the end of the day, Ys II, while it has some stark contrasts to the first, is still an Ys game, melding top-down action and RPG elements together into a smooth, fast-paced experience unlike most anything else from the era.  While it still has some challenging boss fights and puzzles, it is a considerably simpler game on the whole owing to the magic system, and it is given some replay value through multiple difficulty levels and extra modes like a Time Attack and a Boss Rush (in later remakes).  Since every version of it available in English is packaged in with the first Ys, if you enjoy one, you're likely going to play the other too.  You may have more fun with one than the other for a number of reasons, but both prove to be very entertaining halves of a singular whole. 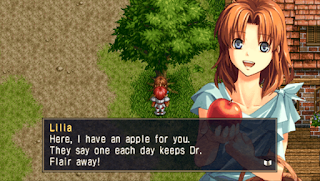 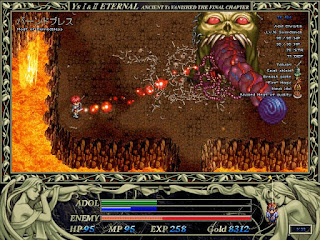 Developer: Nihon Falcom, Alfa System, Digicube
Publisher: Nihon Falcom, Hudson Soft, Atlus, Xseed Games
Platform: PC-8801, PC-9801, FM-7, X1, MSX2, Famicom, Turbografx-CD, PS2, PSP, DS, PC
Released: 2014, 2015, 2018
Recommended Version:  The game is available in English in three primary formats - the DS, PSP and PC versions.  The latter two are mostly identical while the DS verison is a full-remake, and is generally seen as an inferior version by fans due to hits gameplay changes (most prominently an attack button rather than the series' trademark 'touch combat').  Of them all, though, I'd recommend the PC release, which runs at a considerably higher framerate than the PSP version and gives the player their choice of controllers and graphical settings to play with.