Released at the height of Square's popularity in the late 1990s, Chocobo's Dungeon is a Final Fantasy offshoot that combines a cute and colorful visual style with the hefty challenge of roguelike gameplay.  But does it prove to be a competent adventure, or does this spinoff title just tarnish the name of Final Fantasy? 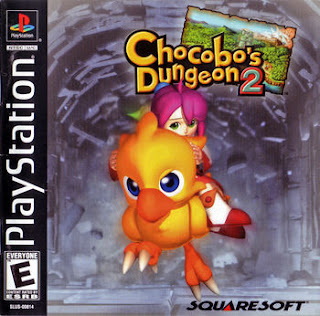 Chocobo's Dungeon 2 is sort of an odd man out in Square's late-90s lineup.  While the other games had taken on a darker tone and more modern fantasy settings, it retained a more fantasy-based world and characters and even still utilized 2D sprites a la their 16-bit titles.  Despite being touted as a Final Fantasy offshoot, it carries over only a few familiar elements of the series, with the gameplay primarily being that of a turn-based roguelike (in fact, it's actually an offshoot of Chunsoft's Mystery Dungeon series).  It also had the dubious distinction of being released as "Chocobo's Dungeon 2" despite the original never being released outside of Japan, which probably led to some confusion and contributed to the game's relatively low sales.

Probably also not aiding matters was the fact that the game was quite challenging despite its cute aesthetics, retaining many of the hallmarks of the roguelike genre.  Even early on, the game is pretty relentless with its difficulty, requiring the player to carefully manage their inventory, health and energy levels in order to survive.  Traps that weaken or disable the player are common, and enemies can actually kill other enemies in order to level up and drastically bolster their own power level, which can put them well beyond the player's current one.  Unidentified items (generally nuts and magic cards) are commonplace, with the only way to identify them being to use them and see what they do, which can prove hazardous to one's health.  Even then, though, the Cantrip and Spell books one finds always have random effects which can help or hinder the player, so gambling is as much a part of the experience as raw skill.  And of course, as per Roguelike standards, dying is very costly, robbing the player of all the items in their inventory and forcing them to redo the entire dungeon from the beginning.

Another thing that failed to win points with JRPG fans was the fact that most everything in the game was not a permanent addition to the player's repertoire.  In addition to losing your inventory when you die, weapons and armor also wear down over time and eventually break.  Even spells come in the form of single-use spell books or summon stones.  The closest one comes to permanent equipment is "feathers", which are earned either as rare items or awarded when the player's equipment is broken.  These can have a large variety of useful effects when equipped - boosting maximum HP, increasing the effective range of certain spells, or even allowing you to summon monsters at any time (at the cost of a hefty Stamina drain for as long as they remain in play).  Some items and effects can even reduce the player's level, which only puts the odds less in their favor, particularly late in the game.  The notorious "recycle boxes" littered throughout the dungeons are another element of this - sometimes you can throw in junk items and get something useful (such as a spell book or piece of equipment) in return, while other times you throw stuff in and get junk back.  Either way, there's no takebacks, so you just have to hope the dice land in your favor - a stark contrast to the more concrete, strategy-driven Japanese RPGs that were becoming popular around this time.

As a result of all of this, mastering the game's mechanics quickly becomes an essential part of survival.  One key element of this is the game's crafting system, allowing the player to combine two items together, along with a magic spell, at one of the stoves in the dungeons in order to create new equipment.  Weapons can be combined to create more powerful variants, while armor can be combined to grant greater boosts or transfer abilities to new, stronger pieces of equipment.  Of course, this all relies on the random element of finding items to combine, a stove to combine them with, and having the proper magic to do so when you do find it.  Shops do afford the player the same service with less risk, though of course you do have to pay money for the privilege there.

Another unique element of the game is that virtually any item or object can be "kicked", removing it from the player's enemy but utilizing it to attack an enemy.  This gives some use to otherwise useless items such as the LostChild cards - normally these will erase the minimap when used by the player, but they will inflict Confusion status on enemies when kicked at them, giving them a practical purpose.  This ties into the game's crafting system as well - kicking empty bottles at enemies will capture their "essence' in them if a killing blow is dealt with the damage they inflict.  This Essence can in turn either be used as a potion to restore some HP or Stamina, or it can be used in combination at a crafting stove to give extra stats and abilities to equipment.

Basically, Chocobo's Dungeon 2 is a game caught between worlds, seemingly made for a younger demographic with its cuter and more colorful visual style.  Its gameplay reveals this to be anything but the case, however, proving to be just as unforgiving and luck-dependent as any well-regarded roguelike title.  Basically, it alienated both Final Fantasy fans with its lighter style and and younger/more casual players looking for an easier game to play, and as a result it was generally shunned by gamers of the time.  It's a polished and enjoyable experience for those who can adapt to its high degree of challenge and complex mechanics, but it's easy to see why it's one of the less-talked-about Square games of the Playstation 1 era. 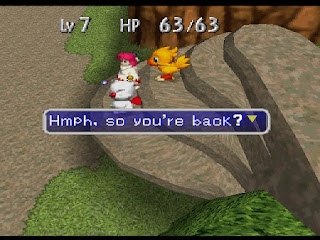 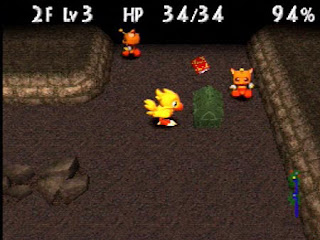