After a string of successes with the Breath of Fire series, Capcom takes the franchise in a new direction, radically mixing up its gameplay and setting into something unlike anything else in the series.  But does this combination of elements work out in the end, or does it just end up alienating franchise and genre fans alike? 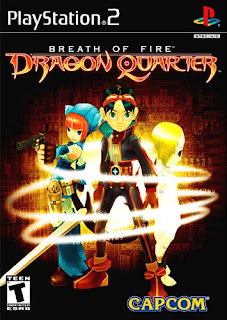 A few things about the Breath of Fire franchise have remained relatively consistent since its inception - a protagonist named Ryu who wields dragon-powers, a heroine named Nina who acts as the primary party mage, and a fantasy world with some dark elements that lend themselves to a compelling narrative.  They would also feature relatively traditional turn-based JRPG gameplay with a few creative mechanics like character fusion, learning enemy skills and having hunting and fishing minigames to earn extra resources.

Dragon Quarter retains a handful of these elements, but for the most part strives to make itself into something very distinct and new.  The setting is only faintly related to earlier games, becoming more of a dystopian science fiction tale than a dark fantasy.  Characters named Ryu and Nina return once again, though fulfilling much different parts in the tale - Nina being a biological experiment sought out by the corrupt government overseeing the game's world and Ryu being a government agent who goes rogue to protect her, gaining the power of a dragon in the process.

The gameplay itself is drastically changed up as well.  While combat in the game is still turn-based, the design of the game itself is like no other RPG before it, combining elements of survival horror and roguelikes into the mix.  The player is afforded a very limited supply of inventory space and resources and no inns to easily restore health, saves are heavily restricted (requiring the use of scarce "Save Tokens" to make a permanent checkpoint of one's progress) and enemies are now visible on the map, meaning that avoiding combat is just as important a part of the game's overall strategy as knowing how and when to fight.  While the game world itself is fixed, the roguelike element comes in the randomized contents of chests and the fact that the player often finds unlabeled gear that must be taken to a town and identified before it can be used, often having bonuses over standard gear like extra skill slots or higher statistics.

The skill system in the game is an odd one.  Players learn skills by  finding items (earned as combat rewards or found in chests), but they are no longer simply accessible from a dedicated menu option like in previous Breath of Fire games.  Instead, the item must be used to add it to the character's repertoire, then it must be added to slots on the character's weapon or shield in order to become usable.  One of the most important skills one earns is one of the few in the game whose location is fixed - the Steal skill.  When equipped on a shield, this grants the character a chance to "steal" any usable skills used on them by an enemy.  This adds a risk-versus-reward element to the game - the player naturally wants to conserve their health and items, but the only way to get many powerful skills is to bait an enemy into hitting them with said skills.

Dragon Quarter's combat is a strange breed as well, primarily because what the player does outside of the combat system proper is just as integral to the overall strategy as what they do within it.  Outside of battle, the player can get a free turn by hitting their enemy first, and the enemy can do the same.  They are also afforded the opportunity to set traps in order to weaken their foes before beginning the fight proper - meat to lure them to a set location, bombs to deal damage (and possibly kill them outright without even having to enter the combat system itself) and other traps that can do things like inflict Poison, Paralysis or Bind status, putting enemies at a disadvantage in combat proper.  Utilizing traps effectively quickly becomes an essential part of the game's strategy, allowing the player to overcome particular encounters that must be beaten in order to progress (and which would be nearly impossible in a straight-up fight).

The combat system - dubbed PETS (Positive Encounter and Tactics System) -  is another innovation.  Somewhat akin to Chrono Trigger, battles take place on the same screen where the player touches the enemy and with character positioning playing an important tactical role.  Unlike that game, however, the player can move freely (not bound to a defined "grid") and utilize the terrain to their advantage - attacking from atop slopes or retreating behind cover to prevent enemies from approaching as easily, for example.  Each turn, every character gets a set amount of AP, and any unspent AP is carried over to the next turn, up to double the maximum.  Movement and attacking cost AP, with attacks coming in three "tiers" that cost 10, 20 and 30 AP respectively.  These can be chained together for a cumulative 10% bonus to each attack after the first, and occasionally creating new moves in the process (chaining Side Slash and Vert Slash in one continuous combo will do an "X Blade" attack that deals extra damage, for example).  Oddly, there is no AP cost to using items mid-fight - perhaps a way to both give the player a fighting chance in tougher encounters (and the fact that they are as limited as they are means the player will want to conserve them whenever possible anyhow).  Winning battles quickly will earn the party bonus experience, as well as more "Party Experience" - points which are stored in a separate counter and can be freely distributed among party members at any time in order to level them up.

Befitting this system, each of the three main characters fills a predefined role.  Ryu, as per series norm, is a front-line fighter with Dragon-based powers that should only be used in very desperate moments (more on that later).  Nina is the mage, doing damage with both traditional direct attacks and being able to set up "magic circles" that essentially serve as in-battle traps, damaging and disabling enemies that walk over them (or get pushed into them by other characters).  Finally, Lin is a ranged fighter with skills that slow down foes and knock them back, keeping them out of melee attack distance - very useful for fighting enemies on the player's terms and, ultimately, conserving limited resources.

Ryu's dragon abilities are another source of challenge in the game.  After a certain point in the story, the game becomes a race against Ryu's "D-counter", which slowly ticks up over time and more quickly as he uses his dragon abilities; these come in the form of a Dash that allows the player to knock enemies aside and avoid fights, melee attacks that each raise the gauge by a set percent, a one-turn stat buffer that also raises a set amount (and can be stacked multiple times for exponentially stronger attacks), and a dragon breath attack that essentially allows infinite damage as long as the button is held down but which fills the gauge at a drastic rate.  Once the D-counter hits 100%, Ryu is overtaken by the dragon and the game ends immediately.  However, the game all but forces you to utilize these abilities, as many enemies and bosses are simply too powerful not to require it, so learning where and when to use them in order to progress is key to victory, and even then you probably won't have enough left to make it all the way to the end on a single playthrough.

This in turn ties into the game's SOL (Scenario Overlay) system.  Simply put, this encourages the player to restart the game, which they can do on the game over screen or at any time by pressing R2 from the main menu.  When this happens, the player restarts the campaign from scratch, but retains any equipment, skills, stored inventory items and unspent Party Experience.  This in turn allows you to make more progress the next time through and eventually complete the game in full once you're powerful enough to overcome all the bosses without maxing out the D-counter.  The game also attempts to prevent things from getting too repetitive through this system - as the player completes the game and gets higher ranks (based on a number of factors, but chiefly using fewer saves, gaining levels and taking less time to finish the campaign), their "D-Ratio" will steadily increase, and as it does so, more plot scenes will become visible and new rooms will unlock, allowing the player to see more of the story and get rare items to make themselves more powerful in the long run.  Sadly, while the D-Ratio does play a part in the story (essentially serving as this world's caste system), Ryu's increasing D-Ratio does not play a role in the plot itself - the narrative always treats him as 1/8192 no matter what his actual ratio is.  Still, it does lend a compelling element to the game, with the player wanting to restart and try for better scores to not just see their way to the ending, but to view all the content that gets unlocked as they make their way to D-Ratio 1/4 (the highest rank possible and the titular "Dragon Quarter").

In the end, Breath of Fire: Dragon Quarter is an unconventional JRPG that works in elements of strategy games, survival horror and roguelikes; a strange combination, but surprisingly fun once the player figures out its quirks and learns to use the overall design to their advantage.  The game requires a lot of planning and specific tactics - and yes, several playthroughs - to see all it has to offer, but it proves to be a compelling and rewarding experience and well worth the investment it demands. 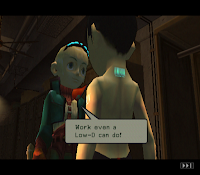 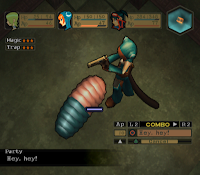