The Nightmare of Druaga: Fushinigo Dungeon

Arika, Matrix Software and Chunsoft attempt to revive a classic Namco franchise whilst mixing in many trademarks of the Mystery Dungeon series to boot.  But does this prove to be a strong combination, or is this one PS2 RPG that was overlooked for good reason? 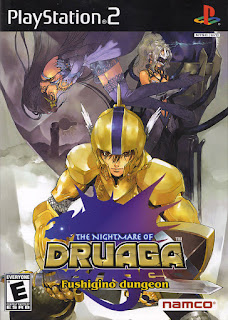 Druaga is one of Namco's earliest franchises, seeing a number of releases in arcades throughout most of the 80s, but despite it appearing on several Namco Museum compilations and even being referenced in a couple of other Namco-published games like Tales of Destiny and Baten Kaitos, not too many people still talk about it today.  Fewer people still talk about the attempt to revive the series on the Playstation 2, which saw overall low sales and little coverage from gaming magazines owing to its punishing difficulty.

It was a difficult game by design, though, in no small part because it was another offshoot of Chunsoft's Mystery Dungeon roguelike series.  To that end, it features many hallmarks of the genre - having to identify items before they become usable, a large number of status-inflicting enemies and traps on each floor to trip up the player, and of course, very unforgiving deaths which force the player to redo the entire dungeon and rob them of all of their items (save for a small handful they may have "engraved" beforehand in town, which doesn't come cheap).  In short, a large part of the game is not only knowing how to deal with hazards, but deciding whether it's worth the risk to press on or whether to make a prudent retreat in order to minimize risk, even if that comes at the cost of having to retread all of the dungeon thus far.

Naturally, being an ostensible sequel to the Druaga franchise, Nightmare works in some elements of those games as well.  The player can actually knock down walls by attacking them with their weapons, which can give them a shortcut to their destination or allow them to make a quick escape from enemies; however, this also depletes 5% of their maximum HP every time they do so, so it's best used only as a last resort.  A persistent mechanic is that the lighting in the dungeon will slowly weaken, eventually leaving the player completely in the dark, unless they periodically Offer an item to Ki to restore the light; the rarer the item, the longer the light will come back on for.  Dungeon floors, unlike most roguelikes, are not fully randomized, but do have the player and enemies start in a different position each time they re-enter.  Each floor also has two hidden chests to find - one silver, one gold - and they will only appear after meeting specific conditions, such as defeating a particular type of foe or collecting the door key without smashing any crates.  Each one is different (and the game rarely provides clues for what will make them appear), but as they often contain powerful equipment or just useful items, they're worth getting nonetheless.  Several iconic Druaga enemies appear as particularly dangerous hazards as well - Will-o-Wisps will explode and reduce the player's HP to 1, while Ropers tend to be high-leveled for the dungeons in which they appear and drain HP with each hit they land, making them very dangerous and difficult to kill alike.  Having a good supply of potions on hand, as well as throwing items to destroy dangerous enemies before they get a chance to attack you, is an essential part of the overall strategy.

Sidequests can occasionally grant you some extra gold and items, though they are somewhat strangely handled as well in that you must undertake them with a completely empty inventory.  Your level is also temporarily reset while on a quest and any experience earned is not carried over when you complete it, making them useless for gaining experience and powering through the game and more as a last-ditch way to build back up your gold and equipment after you get wiped out in the dungeon during the main quest.

Thrillseekers can also elect to take on Bonus Dungeons, which can be undertaken in any dungeon floor the player has already completed by approaching the exit and choosing to "break down the door".  This puts the player in a mirror of the next dungeon floor with far higher-leveled enemies and more dangerous traps (and no option to easily escape using a Feather), but the tradeoff is that they have a much higher chance of dropping rare and powerful items.  In essence, a high-risk, high-reward excursion.

Of course, like any good roguelike, Nightmare of Drauga has an in-depth item combining/crafting system as well.  This time it comes in the form of combining equipment of like type (weapon+weapon, helmet+helmet, etc), sacrificing one piece of gear to power up another.  This affixes a numbered modifier to the equipment as well as adding some of the sacrificed items' stats and attributes to the primary gear.  Once a particular piece of equipment reaches "+15" (having added other weapons' attributes to it at least fifteen times), the player acquires the ability to transfer over abilities as well.  Abilities come in the form of either attack skills (for weapons) or defensive abilities on armor such as making certain status effects less likely to affect the player.  But like any other equipment in the game, the player must take care to engrave them or retreat from a dungeon if they are in danger of dying, because they are just as much at risk of being lost forever as any other piece of equipment.

A more traditional crafting system also appears in the form of the Alchemy shop, letting the player combine leaves, roots and other items together to make potions.  There are two characters who do this for the player; Aziel is the cheaper option and will reliably produce useful items, while Sajia costs much more and has a high probability of creating something weak or even entirely wortheless; however, she also has a small chance to craft rare and powerful items that Aziel cannot create at all, so it may be worth taking a chance on her if you have the cash and items to spare.

Nightmare of Druaga is also wise to the fact that difficult games tend to invite savescumming to circumvent some of the challenge.  As a result, the game auto-saves each time the player transitions between screens, and if they reset the console without doing a hard save, the player will be greeted with a long and unskippable dialog scene upon loading that makes save scumming both annoying and inefficient.  One can also make temporary saves as they progress through a dungeon, but these are erased as soon as they are loaded from the memory card, preventing them from being abused as well.  One nice detail is that after creating a hard save, the player is disallowed from continuing the game right away; instead, they must either reset the console or power it down entirely and turn it back on to continue playing, a la several old RPGs from early computer platforms and the NES.

In conclusion, it's not hard to see why many console gamers and gaming journalists alike shunned Nightmare of Druaga; its punishing design, only passable aesthetics, somewhat slow gameplay and heavy emphasis on random elements is very unlike the Japanese-styled RPGs that were the hallmark of home consoles at that point, and it didn't even play a whole lot like the Druaga series it was allegedly a followup to.  Regardless, it is a very competently-made title, capturing the feel of an old-school roguelike to a T, even its more detrimental elements. Certainly not a game for everyone, but those looking for a title with a lot of content and some steep old-school challenge should definitely give this one a go. 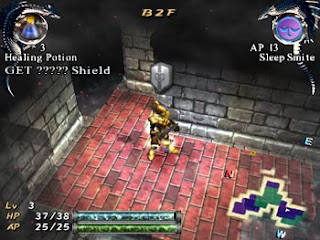 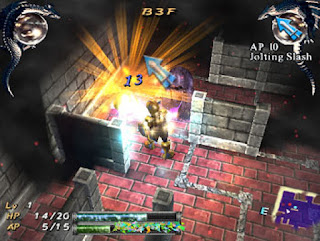