One of Monolith Soft's earliest franchises, released on the Gamecube at the same time they were making a splash with Xenosaga on the Playstation 2.  But does Baten Kaitos prove as worthy as its competing platform counterpart, or is this a second-stringer just fated to be forgotten? 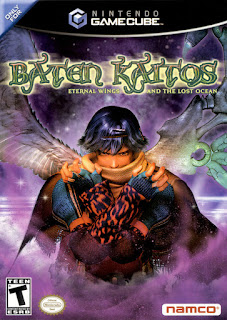 Baten Kaitos was released in the background amidst Monolith Soft's rise to fame with Xenosaga, and despite having some pretty prominent big names behind it, it was largely overlooked in its time and continues to be so today.  There are a variety of reasons for this, but I think the biggest factor was that it utilized an overarching collecting aspect and combat system which revolved around, in essence, a collectible card game.

While the game does still utilize equipment in a basic form (one piece of armor per character), the rest of combat is primarily based around building a deck out of cards (referred to in-game as "Magnus") - whether collected, bought or earned through battle - and utilizing a combination of strategy and luck of the draw in combat.  In essence, the player picks weapon cards to attack and defensive cards to block enemy attacks, and the cumulative total of damage taken or blocked is added up per round and tallied up at the end of the turn.  As the game goes on, more cards can be played per turn (beginning with a mere 2 and eventually working up to 9).  Other factors come into play as well - elemental strengths and weaknesses appear with opposing fire/water, wind/earth and light/dark elements adding or subtracting damage.  Bonuses can also be gained with a bit of the old luck element; each card has one or more numbers from 1 to 9, and by playing the same number repeatedly within a turn, or getting a sequence of numbers in order, progressively larger bonuses can be gained (with a 1-9 or 9-1 combo earning a whopping 306% damage bonus, or 75% damage reduction).  This effectively captures the luck element of a card game, as well as encouraging the player to continuously improve and balance their characters' decks over the course of the game, and it all proves to be surprisingly fun and addictive, at least for a while.

However, it isn't terribly long before the game's design limitations begin to show.  Animations for each attack tend to be fairly lengthy, and when each and every turn consists of chaining together several of them, the game's combat starts to slow to a crawl, especially later in the game.  There are also no multi-target attacks, making mundane fights go on longer than they should, and as damage isn't totaled up and applied until the end of a turn, the player can easily waste turns (and cards) dealing extra damage to an enemy they've already done enough damage to defeat.  And with such a huge number of different cards to collect (over 1000 in all), that means a whole lot of sidequests and grinding to various degrees if you want to collect them all.  Some cards in particular can only be acquired by using other cards in a very specific sequence in battle, which just makes getting them come down to luck of the draw.  Others are time-based, with some cards turning into others after a set period of time passes (the Bamboo Shoot - a healing card - will eventually turn into a Bamboo Pole, a weapon card).  Still others must be collected and farmed through a large number of hidden points and side-missions, and many are permanently missable, which can lend itself to a lot of frustration for completionists.  The Camera cards are an especially egregious example of this, as they serve both as a major collectible component (each enemy and boss grants a different card when photographed, as does each protagonist, who also have a rare variant that can only be acquired at very specific times).  Frustratingly, camera cards are also your primary source of income; found weapon/armor cards give virtually nothing in terms of money, and you actually have to snap the photo and wait a while for the picture to develop before it will sell for a decent amount, lending even more of a time-sink element to the game.  The second disc in particular feels padded out to the point of inanity, as you end up doing the same basic quest no less than four times in a row at one point and retreating huge portions of the game, seemingly just to add to the runtime rather than fulfill any genuine story purpose.

It's all a bit of a shame, really, as beneath the lackluster gameplay is a surprisingly polished aesthetic experience.  There is a stunning amount of production value behind the game, with gorgeously-rendered, brightly-colored character designs and environments that have some neat visual effects like billowing clouds and flowing water.  The music in the game, provided by the extremely talented Motoi Sakuraba, is absolutely amazing, and virtually every attack the player uses in battle has its own animation, and they're all well-done at that.  The one drawback in the presentation is the voiceover, which is uniformly bad and inexplicably has an irritating echo effect applied to it at all times unless the "Surround Sound" option is chosen in the in-game options menu.  A pretty bizarre and inexcusable mistake, especially as at least one trailer for the game featured voiceover of a much higher quality and Monolith's own Xenosaga franchise featured professional actors and staged cinematics on par with a good animated movie.

There is a lot to like in Baten Kaitos' writing as well.  Penned by Masato Kato (best known for Chrono Trigger), he brings some clever elements to this game as well.  A clever twist on the norm is that the game's main protagonist is not the on-screen character, but rather the player themself, a "guardian spirit" who guides the protagonist's actions and, at times, is deliberately kept in the dark about his actual motives and character, which helps to set up some pretty clever and unexpected moments.  Playing off of this, as well as the common trope of dialog choices not mattering in JRPGs, is the fact that a hidden mechanic in the game is the bond between Kalas and the player - the more often you pick dialog choices that are in-line with those Kalas would make, the stronger your bond grows, and the more frequently you will get to do powerful finishing attacks in combat.  It's a bit unusual to have the game's protagonists breaking the fourth wall to address the player directly, but it's ultimately a well-handled and interesting gimmick that makes putting up with some of the game's other flaws worth it.  Of course, it also helps that Kato writes some very fun characters that put clever twists on the archetypal RPG norms (particularly Kalas, who is a rather atypical hero and, honestly, kind of a jerk).  There is quite a lot of thought and lore behind the game's universe to boot, as well as some clever cameos from other Namco-published games like Pac-Man, Xenosaga and Tower of Druaga.

What it all comes down to is that Baten Kaitos is a game that alienated many with its basic gameplay premise, and most of the few that remained were further driven off by its slow-paced, padded and grind-heavy design.  It's all a bit of a shame that there wasn't more focus put on improving the game's overall pacing and reducing its frustrating elements, as there is quite a lot to like here on the writing and aesthetic fronts.  Very patient gamers will definitely find a lot to like here, but the rest of us will have a hard time seeing it through the game's less savory elements. 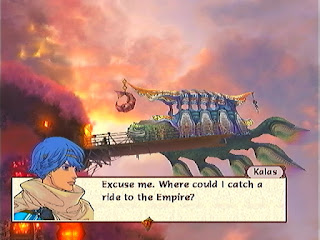 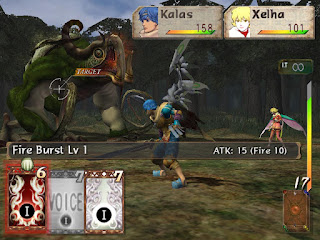