The Legend of Zelda: Majora's Mask

Released less than two years after the first Nintendo 64 Zelda game, Majora's Mask utilized the system's RAM expansion, as well as the developers' better familiarity with the hardware, to deliver a more in-depth and complex title than the first.  But do Majora's Mask's many new features raise it above its predecessor, or does it just try to do too much and fall apart? 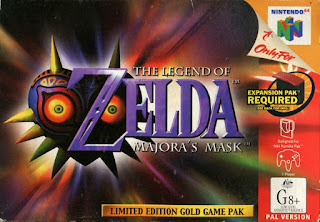 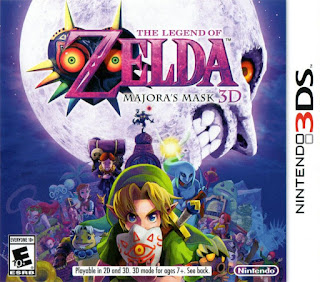 Even fans of Ocarina of Time will likely tell you that it was a game that felt unpolished in some respects; the rather "basic" set of equipment Link is granted throughout, particularly compared to earlier games, as well as the somewhat drab game world and massive amount of unused content buried in the code, quickly marks it as a game that saw many changes and scalebacks over the course of development.  This could come down in part due to the Nintendo 64 being a notoriously difficult system to program for and it being somewhat rushed to make it out in time for the holiday season, but no matter what the reason, Ocarina of Time seemingly didn't live up to its full potential.

Attempting to address this and show what the Nintendo 64 was truly capable of, Majora's Mask debuted less than two years after Ocarina of Time did.  Coming with the same distinctive gold cartridge and a lenticular cover, as well as requiring the shiny new "Expansion Pak" that added four megabytes of additional RAM to the system, it was clear that the developers had intended this to be a more polished effort on the whole.

Maybe a bit too much in some respects, Majora's Mask goes out of its way at every turn to add new features and put fresh twists on the standard Zelda formula.  The most prominent of these is a pervasive time limit, with the player constantly replaying the same three-day time span and rewinding to the start each time they either play the Song of Time or the timer runs out and Termina is destroyed.  Nearly all major events in the game only occur at a specific time, which can force the player into doing other sidequests or simply idly passing the hours until the event they want to complete comes up. Missing an event is also irritating, as one will have to reset the entire three-day cycle to get another attempt at it in most cases. The game alleviates this to a degree with two new songs - one which slows time to half its normal rate and one which immediately skips time ahead twelve hours - but it can still be a nuisance.  Worse, the game's saving mechanic is tied to this as well - one's progress is only saved when the cycle is reset, with the various save points on the overworld only providing temporary "quick-saves" which are erased as soon as they are reloaded - this means if you lose power to the system at any point, you can lose quite a lot of progress.

Another major changeup comes in the game's sheer focus on masks.  Not only is the main villain one (the titular Majora's Mask), but they now play a massive part in the overall gameplay as well (especially compared to Ocarina of Time, where they were a rather uneventful sidequest).  In addition to his base form, Link now has three main transformations (a Deku Scrub, a Goron and a Zora) as well as a number of minor masks that grant various benefits.  For example, the Rabbit Hood doubles link's running speed, the Mask of Truth lets him speak to animals and Gossip Stones to get clues, and the Stone Mask makes him invisible to patrolling guards, rendering the stealth sections of the game considerably less annoying.  Nearly all are tied to individual sidequests, but collecting them all just to see what they do proves to be a surprisingly fun venture.

The three transformations add a significant new dynamic to the gameplay as well.  The Deku Scrub form, for example, allows link to skip across water and fly for short distances utilizing Deku flowers, but has a crippling weakness to fire and relatively weak attacks.  The Goron is a slow but durable fighter with a spinning attack that can allow him to reach new areas or just blast through rooms at startling speed, but he sinks and drowns instantly in water.  The Zora form can swim underwater at great speeds, generate an electrical barrier and throw his arm-blades like boomerangs, but also dies instantly when exposed to fire.  Each has a number of challenges that can only be overcome when in that particular form, and all see varying degress of use in the numerous side-missions, minigames and dungeons.

Another notable changeup here is that Majora's Mask heaps on the atmosphere in spades.  While Ocarina of Time doubtlessly had some dark, almost horror-esque moments, Majora's Mask cranks this element up to eleven and thrusts the player into an alien world with a very dark and surreal atmosphere.  Odd color palettes and musical cues, strange and unexplained events throughout, an unflinchingly malicious villain whose influence literally hangs over the player's head at all times during gameplay, and some downright surreal and eerie scenes all contribute to making this a very unsettling game.

In addition to this, the game seemingly goes out of its way to make every location interesting in some way, perhaps in response to some of the criticism directed at Ocarina of Time.  Textures in the game are of a much higher resolution and much brighter color palette overall, lending the game a lot more visual flair.  The environments also feel much more dynamic and alive - in addition to timed events, very few areas feel overly large, drab or empty.  Even the dungeons are taken to new levels, with very few of the generic light-the-torch and push-the-button puzzles that pervaded Ocarina of Time; indeed, one dungeon in particular has you rotating it in its entirety to progress and reach its various hidden treasures, which is both visually impressive and quite a feat for the hardware.

In the end, Majora's Mask is a game packed to the brim with ideas and content, and while not all of them work, it is clear that its developers wanted to make something truly original and memorable.  They certainly did just that, creating a game with plenty of atmosphere and imagination that most ot her games - even other games in the legendary Zelda franchise - struggle to match up to.  Ocarina of Time is an entry I have trouble revisiting, and while this still has many of its clumsy control and camera issues, its positive aspects keep it fresh and ensure that it's probably my favorite of all of the 3D Zelda titles. 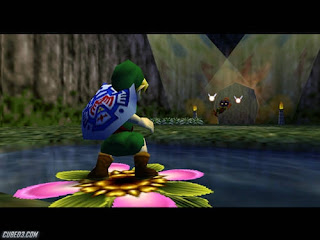 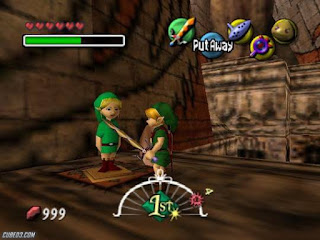 Developer: Nintendo EAD, Grezzo (3DS version)
Publisher: Nintendo
Platform: Nintendo 64, Gamecube, Wii Virtual Console, Nintendo 3DS
Released: 2000, 2003, 2009, 2015
Recommended version: The 3DS version of the game is definitely the one to get.  Not only does it retain all of the core gameplay, but it adds in several tweaks to make it a more friendly experience on the whole.  Save statues now serve as full-fledged save points, it has a fully controllable camera (via the Circle Pad Pro or a 3DS system with equivalent built-in) and supports skipping time to a specified hour rather than simple twelve-hour intervals.  Other features are added as well, like remixed boss fights that feel more in-line with the Zelda franchise by giving them more of a puzzle element, as well as a handy in-game guide to keep track of sidequests you've started and completed.