Released between Square's much-touted baby Final Fantasy IV and fan-favorite Final Fantasy VI, the fifth game in the franchise is one of its more overlooked entries.  But is it a worthy title in its own right, or is this title generally neglected by fans for a reason? 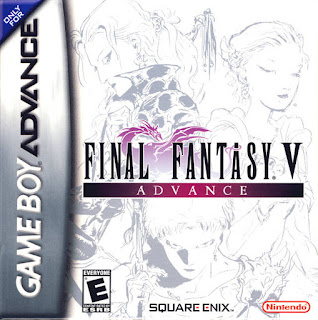 However when it did finally get a western release on the Playstation, it seemed that few people actually took the chance to play it.  Part of this may have just come down to poor timing (it being released at the height of Final Fantasy's fame, when 7 and 8 were the hot new games on the market), but it may also have been in part due to a lackluster porting job.  While other sprite-based RPGs on the system like Suikoden and Wild Arms showed very few, if any, load times, Final Fantasy V had them between every single combat, which made it feel rather poorly optimized for a port of a game that was over five years old by that point.  This was paired with a rather dull translation, lacking much of the humor and character that Ted Woolsey injected into Square's later SNES titles, and which lacked in polish even in comparison to a fan translation that had been available via emulation for quite some time.  It seemed even Square didn't give much thought to one of their own games, and as a result, most of their newfound fans didn't either.

A shame, then, as Final Fantasy V is one of the franchise's stronger titles in terms of gameplay.  It  takes the class-based system of the first and third Final Fantasy games and puts some new twists on it, which allows Final Fantasy V to be a standout title in its own right.  There are a total of 22 in the game (26 in the GBA and later versions), with each having a distinct set of skills and special abilities.  For example, the Knight class can equip heavy armor and shields and take hits in place of their allies, while the Summoner can call upon powerful creatures to deal heavy damage to enemies or aid the party.  Many of these return from Final Fantasy III, though there are some new ones as well like the Blue Mage (who can learn unusual spells from monsters with a variety of useful effects) and the Berserker (a powerful but uncontrollable physical fighter that wields axes and hammers).

Final Fantasy V's most defining feature, however, is that the player's characters are not locked into any given classes' abilities when they select them.  As a matter of fact, the player can mix-and-match abilities between classes on each of their four characters, allowing them to create hybrid characters that eliminate some of the glaring weaknesses many classes possess or expand their repertoire of skills.  One can, for example, learn the Equip Armor ability as a Knight, then change class to a White Mage and keep the ability to equip armor to compensate for their comparatively weak defense.  Red Mages are limited in that they can only cast the first three tiers of spells (out of eight), but they also learn a powerful ability in "X-Magic", allowing them to cast two spells in one turn; this can be passed to the Black Mage class, allowing them to cast two powerful Flare spells in one turn in the late stages of the game.  Even the basic "freelancer" class has a purpose in the late stages - while they have only decent stats and learn no inherent skills of their own, they can equip any two abilities they've learned over the course of the game and have no restrictions on what weapons and equipment they can use; thus, they can wield the spell sets of two magic-casting classes, for example, without being held back by inferior equipment choices.  This element adds much depth and strategy to the game, allowing the player to adopt new strategies on the fly to deal with new challenges.

This does come at a price, though.  Skills are learned by gaining "ABP" after each fight, with better and more powerful skills generally taking high amounts to learn (up to 999 in the case of X-Magic), and as most battles tend to give ABP amounts in the single digits until the late stages of the game, this can amount to fighting quite a lot of mundane enemies to get a skill you want.  There are a few particular enemy types that give large amounts, which does help cut down on the grind, but nevertheless, there is quite a bit of extra combat required if the player wants to become a force to be feared, especially late in the game.

Not helping with this is the fact that Final Fantasy 5 possesses uneven difficulty at times, with several instances of enemy groups in innocuous places that are far above the player's current power level and bosses that can easily wipe the party if the player doesn't adequately prepare for them beforehand.  While not as big an issue as say, Final Fantasy II, this can nevertheless become a point of frustration. Thankfully the player is allowed to save at any time on the world map, and there is almost always a save point before bosses, allowing the player to fully heal their party with a Tent or Cottage or reset to leave and power up more if their team simply isn't up to the task yet.

Final Fantasy 5 continues in the series tradition of having a strong presentation, with well-detailed enemy sprites (albeit non-animated) and of course beautifully-detailed world, town and character sprites in each of the towns.  This was still the era before gray and brown "hyper-realism" kicked in to the gaming consciousness and color bled out of most games for the better part of a decade in an attempt to convey a "dark mood" in spite of all the silly humor and campy acting, so it's at least nice to see here.  And of course, the music is still top-notch, with some great atmospheric tunes carrying each of the new locales and conveying the intensity of some of the game's tougher battles (particularly the fights with Gilgamesh).

One of Final Fantasy 5's biggest weaknesses, though, is that it's relatively light on story and character development.  Neither the main cast nor the villains are given a lot in terms of characterization, and the story itself is rather generic, with an ageless evil force out to destroy everything and the characters dedicating themselves to stopping it.  This, paired with the lackluster translation of the early releases, made it one that many fans of 6 and 7 were quick to dismiss.  The GBA port (and later versions) do at least attempt to spice things up by adding in some humor, giving the dialog and enemy names a much sillier feel overall.  In fact, it's more than a bit reminiscent of Ted Woolsey's translations of Chrono Trigger and Final Fantasy 6, which is a bit ironic as later versions of those games were retranslated to remove much of the humor that came from his creative embellishments.

Still, while it may not have the best of narratives and some occasional spotty difficulty, Final Fantasy V is one of my favorite games in the series.  There is much charm in its uncomplicated setup, yet its gameplay provides it with a large degree challenge, variety and replay value that many other games in the series lack.  It may not be an outstanding fan favorite, but it's one of my personal picks for the top games to bear the name. 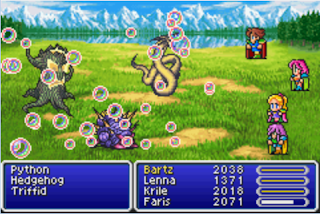 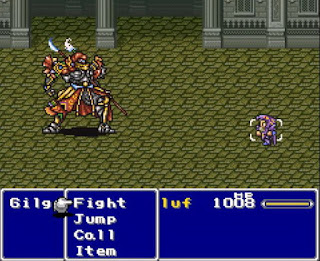 Developer: Square
Publisher: Square/Square Enix
Platform: Super Famicom, Playstation, Game Boy Advance, iOS, Android, Windows
Released: 1992, 1998, 2006, 2013, 2015
Recommended version: The Game Boy Advance version is my favorite, if only because it has a much-improved translation over the original and none of the techncial issues of the PS1 release, plus a generally faster pace, some added content with four new classes and an extra post-game mission that expands upon the story somewhat.  Later ports to iOS, Android and Windows include this as well, but also rework the interface and visuals to be much more intrusive and gaudy-looking with clashing visual styles.