One of Konami's first attempts at breaking into the RPG market in North America was Suikoden, released in the early days of the Playstation in both North America and Japan.  But does this foray into war drama and JRPG-styled gameplay do a respectable job, or is this title mostly forgotten nowadays for a reason? 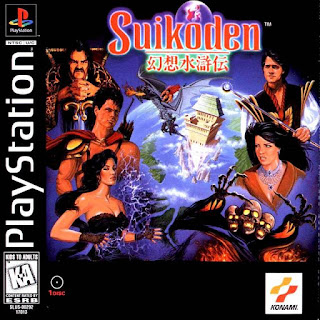 Suikoden is a bit of a cult favorite among Playstation adopters.  Loosely based on the classic Chinese novel "Water Margin", it featured somewhat higher stakes than many other JRPGs available at the time.  You weren't just battling against against an evil empire in Suikoden - you actually had to go through the motions of building your own army over the course of the adventure, recruiting generals, hiring people to staff and improve your castle, and repelling the empire in large-scale battles featuring hundreds or even thousands of soldiers.  Drawing from its inspiration, there really were 108+ characters to recruit in each game, with a good half of those being controllable within the main party.

The gameplay wasn't as complex as I'm making it sound, however, as the games' overall design were still very firmly clued in to the simpler, faster-paced style of Japanese RPGs.  In Suikoden I's case, the war battles play out somewhat akin to a game of Rock-Paper-Scissors, with each side picking between Warriors, Archers and Mages at the start of each turn; Warriors beat Archers, Archers beat Mages, and Mages beat Warriors, with a "victory" incurring a much larger loss of troops on the opponent's side.  The player is generally at a disadvantage in sheer numbers for storyline purposes, but characters they recruit over the course of the adventure give them an edge.  For example, recruiting some ninja characters allow the player to see what action their opponent will take next, while merchant characters can sometimes bribe some of the enemy's troops into changing sides.  Also important to keep in mind is the fact that the characters one recruits also take part in war battles, and taking losses can result in them being injured or even killed outright, which can rob the player of the best ending; thus, strategy, luck and saving beforehand in case things go wrong are all essential elements of the war battles.

One-on-one duels play out at some points of the story as well, and these also function akin to a game of Rock-Paper-Scissors, with Defend beating Wild Attack, Wild Attack overcoming normal Attack and Attack overcoming Defense, with the player getting clues from the character dialog for when to use which strategy.  Characters' stats do play into them as well, however, so if a character is underleveled, they can easily die in one attack while their opponent takes virtually no damage.  This makes it important to keep story-relevant characters' levels and equipment current for the times they will be needed.

Thankfully, this is not as big a chore as one may expect thanks to the cleverly-designed experience system.  Rather than leveling up in a linear fashion, Suikoden gears itself toward allowing weaker characters to quickly level up.  The amount needed for a character to gain a level is set at a flat 1000, and the experience characters gain from a battle is divided by their current level - thus, a lower-leveled character will gain far more experience than a higher-leveled one, allowing them to catch up quickly.   This is quite convenient for trying out characters for your main team as well.

Another notable aspect of the game is the fact that it has very few visible load times.  While the music does audibly stop and start when switching to a new area, the game itself runs very smoothly, with no load times beginning or ending combat and only a second or two when transitioning between maps.  A stark contrast to many games that came later, most particularly the ports of the SNES Final Fantasy games released as part of the Anthology and Chronicles compilations, which infamously had very long load times between every single battle.

As with any other JRPG worth its salt, Suikoden features a number of side-quests, hidden treasures and grinding elements for more hardcore gamers, with a plethora of enemy groups throughout having a small chance to drop rare runes or strong pieces of equipment that can't be easily acquired elsewhere.  Indeed, while it is possible to beat the game in a fairly casual run-through with few problems, the truly hardcore can outfit their entire 108-star army with strong equipment, top-tier runes and enough levels to trounce any opposition in only a turn or two, making it have appeal across the entire spectrum of gamers.

The first foray in the Suikoden franchise is a game worth checking out for any serious Japanese RPG fan.  Its well-crafted story, interesting setting and large cast of characters make it a rare example of a successful war epic in the realm of console gaming, and its impressive spritework was a pretty rare sight for a Playstation 1 game in an era when games were largely transitioning into very blocky, grainy-textured 3D models.  It may not be the franchise's best, but it laid the framework for much better things to come. 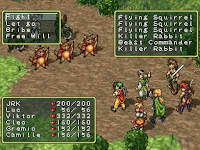 Developer: Konami
Publisher: Konami
Platform: Playstation 1, Saturn, Windows, Mobile
Released: 1996, 1998, 2008
Recommended version: The only version available in English is the PS1 release, which is available both in physical format and as a download on the PSN (playable on PSP/Vita/PSTV or Playstation 3).