The fifth main entry in the Elder Scrolls franchise was a massive success for Bethesda, becoming a big hit among fans and critics as well as one of the best-selling video game titles of all time.  But is there enough here to appeal to long-time series fans as well, or does it change too much to an action-oriented format and alienate them? 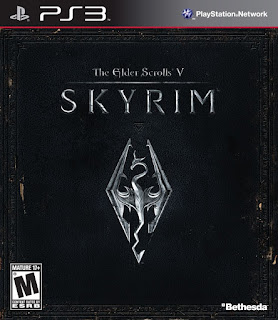 Skyrim is a game that needs no introduction to modern gamers, as it was nothing short of an institution at the time of its release.  As with the earlier Elder Scrolls games, it introduced the player to an enormous, intricately-detailed fantasy world and gave them the freedom to do nearly anything they wished within it - exploring dungeons, fighting bosses, taking on a huge variety of side quests, or even doing more mundane things like gathering ingredients for alchemic potions, mining ore to craft swords and axes, or just taking on the role of a freelance thief or pickpocket.

The exploration aspect of the game feels considerably more well-refined in Skyrim's case, with a dense landscape to dotted with numerous towers, fortresses and caverns to explore.  Many of these have a bit more of a distinct "video game level", feel, with a series of puzzles, traps and enemy obstacles to overcome and usually capped off with a "boss encounter" featuring a powerful foe with some scripted events in the fight (such as a hagraven who summons more foes before teleporting away, only to confront the player later in the gauntlet).  Efforts are made to give a tangible reward at the end of each of these as well, whether it's a nice piece of loot that ties into a larger quest, another word for a Dragon shout (more on those in a bit) or just a nice magical weapon the player can keep or sell at their discretion.  Most even have a quick escape route after the boss is defeated, cutting down on time spent backtracking and keeping the overall gameplay flow smooth.

Combat in Skyrim has seen much improvement as well.  As in Oblivion and Fallout, enemies show a much greater degree of intelligence, requiring the player to time their attacks and blocks in order to counter their opponent's moves and to quickly identify the biggest threat in a group of enemies.  New options are afforded in the various "dragon shouts" the player acquires throughout the game, which have a variety of effects - sending enemies flying with a powerful blast of force, breathing fire, slowing time momentarily, or even speeding up one's own attacks in order to deal damage more quickly, to name just a few.  Spells are similarly overhauled, with the player now having the ability to use spells that consistently launch elemental damage or heal themselves as long as they hold the button, rather than having to continuously cast a spell over and over again.  Using a stealthier approach is beneficial at times as well, as the player can often pick off several opponents from a distance with a bow before they are alerted to the player's position and attack in force.

Dual-wielding weapons is also possible now, letting the player wield two one-handed weapons at a time and gaining the enchantments of both, as well as being able to attack more quickly.  However, this comes at a cost - characters cannot block attacks while dual-wielding, so while they deal out more damage, they will take more as well.  Learning to evade enemy attacks becomes more important when employing this style, and of course having a few spare potions around isn't a bad idea either.  Spells can be used in similar fashion, with the player equipping a different one in each hand and casting them separately, or even both at once, at their leisure.

But with this success came much criticism from long-time fans, who were quick to point out that several elements from earlier Elder Scrolls games were simplified or removed entirely.  Most noticeably, there are three melee weapon types now (swords, maces and axes) and no individual skills for them - instead, they are now coalesced into simple "One-handed weapon" and "Two-handed weapon" skills and are largely interchangeable.  Weapons also no longer break or degrade with use, which effectively takes away the Blacksmithing skill and its associated benefits.  There are no longer Unarmored or Unarmed skills in the game, making fist-fighting rather pointless and all but forcing mage-type characters to either avoid direct combat entirely or bring enchanted gear and spells to offset the disadvantage it puts them at.

Another common criticism is that some of the freedom afforded the player in earlier games is lost in the spell system.  Players no longer have the ability to make custom spells, instead having to find or buy spell books that give them pre-made effects.  Enchanting is somewhat more limited as well, as the player must now find a pre-existing magical weapon and "decompile" it at an enchanting altar, which destroys the weapon in the process but gives the player that spell effect to add to their own enchantments.  Many of these are randomly placed throughout the world, which can ensure that some effects (such as Banish) are entirely a matter of luck to find.

Perhaps the most stark change, however, is that the player's core stats are now completely removed from the game.  No longer does the player have things like Strength, Intelligence, Personality, Speed or Luck; instead, these are either fixed (such as move speed and jump height) or determined by the perks one receives through the refined skill system.  For example, once one reaches a certain level of proficiency in the One-Handed Weapons skill, they can buy a Perk that allows them to deal more damage with all one handed weapons, in effect giving them more "strength" and damage when using those types of weapons.  These don't always boil down to just numbers, either - training the Archery skill tree can give the player the ability to zoom in and slow down time in order to take more precise shots, while powering up the Stealth skill can remove the penalty for moving quickly while in sneaking mode.  Similarly, one can cast two of the same spell at the same time to get a bonus to its effect, whether extra damage, defensive buff or healing effect on themselves.  The Lockpicking tree has some benefits as well, even if the player has gotten quite good at the minigame associated with it - boosting it enough and buying new perks will grant bonus gold or rarer items in chests.  In short, the game abolishes a significant RPG element by doing away with core stats, but also makes efforts to preserve its roleplaying element by rewarding the player for sticking to a certain style of play, all while sacrificing none of the dynamic action of the game.  It's different, but works surprisingly well.

I feel that also sums up my feelings about the game as a whole.  While it makes some controversial changes to long-established genre and series tropes that were unpopular among many series fans and its main plot is pretty lacking compared to its predecessors, its action is quite engrossing and its atmosphere is quite heavy, though the fun books, dialog trees and notes from the earlier games that filled in a lot of its lore and backstory in an interesting way seem considerably less prevalent this time.  However, in spite of those issues, as well as series' trademark bugs and balance issues, Skyrim remains a fun adventure to undertake - one you can easily get immersed in for hundreds of hours.

Developer: Bethesda Game Studios
Publisher: Bethesda Softworks
Platform: Playstation 3, Xbox 360, PC, Playstation 4, XBox One, Switch
Released: 2011, 2016, 2017
Recommended version: As with the other Elder Scrolls games, I'd recommend the PC version solely on the fact that it features modding support, which allows for virtually unlimited replayability by tweaking some of its gameplay elements and adding new content.  The Playstation 4 and Xbox One ports include all of the DLC and have modding support as well, however, making them worth consideration for those looking for a console version.  Finally, the Switch version provides a bit of exclusive content (in the form of Amiibo support and an exclusive Link costume) and includes all the DLC from the earlier releases, making it an excellent portable version of the game.
Labels: ⭐⭐½, 🎣, 2011, Full Reviews
Newer Post Older Post Home