To many PC gamers of the late '90s, Baldur's Gate was one of the games that put BioWare on the map and helped push Dungeons and Dragons games into a new generation of the gaming consciousness.  But does BioWare's breakout game stand the test of time, or is this one adventure that's best left as a historical curiosity and little else? 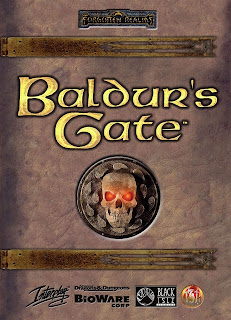 Dungeons and Dragons is certainly nothing new when it comes to the world of video games - having been around longer than the medium itself, there have been numerous D&D inspired games from the very beginning.  Games like Ultima, Wizardry, Dragon Quest, Final Fantasy and Might and Magic all drew heavy influence from the game, and it of course inspired a franchise of games in itself.  Probably the most prominent of these for most of the 1980s was the "Gold Box series" by Strategic Simulations, which effectively carried over the rules of the tabletop game while also engrossing the player in a long-running narrative that spanned four games and even a toolkit that allowed players to build their own adventures in the engine.  Others soon followed, including the Dragonlance series, the Eye of the Beholder games, and even the first graphical MMORPG ever made, Neverwinter Nights, released in 1993.

BioWare acquired the license in the mid-90s and threw their own hat into the ring with Baldur's Gate in 1998.  Baldur's Gate, unlike many of its predecessors, aimed to provide a true "role-playing" experience by giving the player freedom of choice and multiple ways to complete almost every objective put before them.  This, aided with a dense narrative, developed characters with a complement of voiced dialog (with no shortage of big names like Jim Cummings, Jennifer Hale and Grey Delisle) and a very large number of sidequests, made for a game that provided quite a lot more content and variation than most RPGs before it.

Baldur's Gate was also quite an impressive game on a presentation front.  Like many games of the era, it took full advantage of the CD format to provide not only a lot of gameplay content, but a strong graphical and audio presentation.  Music is in typical quality for the format, lending a strong orchestral feel to the combat and some nice atmosphere for the towns.  Visuals in the game, unlike many RPGs of the era, were also not tile-based, instead utilizing prerendered backdrops and fully animated 3D models for the characters, giving it a more fluid feel overall.  Key scenes are also conveyed through computer-generated FMVs which, while laughably dated by modern standards, were quite a sight to behold in the late '90s.

In terms of gameplay, Baldur's Gate is somewhat more of a mixed bag, however.  Advanced Dungeons and Dragons rules are painstakingly recreated in the Infinity Engine, for both good and ill.  This, paired with the game's low level cap (89,000 experience in the base version, 161,000 with the expansion installed) proves to be a point of frustration on several fronts.  Many classes that truly shine at higher levels, such as Mages, prove to be nearly useless for a large portion of the game, getting to cast only a small handful of spells and then becoming dead weight until the party rests again.  Even the latter proves problematic, though, as one has to make the ever-infamous THAC0 rolls to hit anything, which start at a very high base and grow lower (requiring lower rolls) as their level decreases - thus, many of the early game fights become a frustrating affair of standing toe-to-toe with each enemy you run across and hoping you hit them before they hit you too many times and kill you.  Experience is divided evenly amongst the entirety of the party, which, when paired with the overall low experience gains most enemies give, ends up making leveling an extremely slow and arduous process.  Some spells like Hold, Confuse, Horror and Charm also last an obnoxiously long time, usually persisting until long after the fight ends and forcing the player to wait long periods before getting to quicksave.  In the worst possible cases, allies can even run off randomly into another encounter while under the influence of Fear or Confusion and get slaughtered, forcing the player to reload and lose several more minutes of progress than they normally would.

Worse, the game also falls into the trap of making fights atrociously difficult in its late stages, which can boil some encounters down to either pure luck or basically having to "cheat" to succeed.  Two prominent examples in my mind come during an ambush where the player must defend some officials from hasted, high-leveled doppelgangers who resist all spells and beeline straight for their quarry, with an instant game over occurring if they die; I spent well over three hours here alone simply trying every spell, wand and strategy at my disposal to get them to survive long enough to give me a fighting chance, only eventually winning out by pure luck.  The final battle is just as much of a pain, with the villain flanked by numerous high-level mages who cast spells well beyond what the party can, flooding the screen with webs, confusion, fireballs, Malisons, and all sorts of other ridiculous effects that the player has basically no means to resist, all whilst the main baddie (a very high-level, magic-resistant fighter) is running around landing highly damaging attacks with every swing and the room is littered with booby-traps that only unleash more pain on the party.  The only recourse I found here was to stealthily pick off the guy's mages from a distance with fireballs and Flaming Oils before the fight even began, then have one Hasted character serve as a diversion while the rest pelted him to death with Magic Missiles and flaming arrows.  It felt completely unfair and is probably not at all what the developers intended, but it was either that or get slaughtered in an endless barrage of status spells and fireballs, so I saw little recourse in the matter.

In the end, Baldur's Gate is a Dungeons and Dragons game with a particularly insidious GM at the helm, throwing everything nasty they can think of at the player and all but forcing them to abuse quicksaves and various bugs and exploits in order to succeed.  Even then, though, they'll still have to reload many times as their main character gets unavoidably killed by a cheap shot and brings the game to an immediate end on an extremely frequent basis.  Some may applaud it for that - I did at first too - but games like Shadowrun, Oblivion, Skyrim and Fallout: New Vegas would later serve as proof positive that western RPGs could do just as well without rigid and arbitrary dice rolls dictating every facet of the game experience, or nearly as many instances of a single one meaning the difference between life and death.  So while I do applaud the game's narrative and eye for detail, I don't find it a particularly fun title to revisit today.  Its sequel fares somewhat better, having cut down the effect time of many spells and the higher level of the setting lending less "save-scummy" feel to the proceedings, but both still fall into many of the same traps and end up being more annoying than fun. 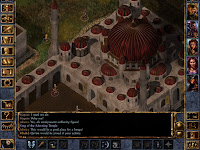 Developer: BioWare, Black Isle Studios, Overhaul Games
Publisher: Interplay, Atari
Platform: PC, iOS, OSX, Android, Linux
Released: 1998, 2012, 2013, 2014
Recommended version: The 2012-and-on rerelease "Enhanced Edition" updates the game into the Baldur's Gate 2 engine, allowing for a much greater number of class choices, reduced spell durations on many effects (most prominently Charm and Sleep) and a much less cumbersome interface.  This also for higher resolutions, adds in some new characters and a new, alternate story mode called "the Black Pits" which makes the game play somewhat more akin to Diablo with its randomly-dropped loot and enemy encounters.  These new additions are of somewhat uneven quality, but the updated engine alone makes it a considerably smoother experience than the original release, as well as one more befitting modern standards (the original game could only run in 640x480 or 800x600 fullscreen mode).  All in all, a much better experience - bump it up half a star on the rating scale.