Black Isle takes the helm for another adventure in the Infinity Engine, made famous by Baldur's Gate and its sequel.  But does Icewind Dale's greater focus on combat ultimately help or hinder its playability? 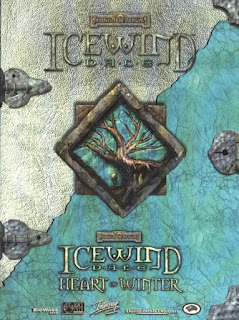 Black Isle (later rebranded "Obsidian" after Interplay's financial troubles) is a name synonymous with many beloved RPG franchises, having worked on games like Fallout 2, Fallout: New Vegas, Planescape Torment and a few others like Alpha Protocol and Dungeon Siege III.  They also contributed to the Baldur's Gate franchise, and would later take their own crack at the Infinity Engine without Bioware's support in Icewind Dale.

Like virtually every prior video game both licensed and inspired by Dungeons and Dragons, Icewind Dale largely exhumes the device of a tabletop role-playing game as a storytelling vehicle and instead focuses almost exclusively on combat.  This is even more apparent in this game's case, however, as encounters in the game are frequent and massive in scale compared to Baldur's Gate - one can easily walk into any room in a dungeon and face a small army of roughly twenty monsters bearing down on them all at once.  Similarly, virtually every spell in the game is geared toward combat, removing many of the utility spells from Baldur's Gate in favor of adding more elements, enchantments and healing spells to give the player more tools for the battles they will face.

All of that said, Icewind Dale is at least one of the better-polished games in this format.  Combat, while frequently challenging, feels far less "cheap" than Baldur's Gate, with considerably fewer instances of spells that debilitate one's party and scarcely any foes that feel overly "broken" and all but require the player to use underhanded tactics (and savescum) in order to succeed.  This is aided in part by having numerous new equipment choices that allow the player to resist many status effects that neither Baldur's Gate ever allowed them to, but also by having a more linear progression to the game that ensures they won't stumble into, say, a Beholder lair before it's something they can reasonably handle.

The more linear format, as well as a lighter focus on story, comes into play in other tangible ways as well.  Most notably, since the story is no longer focused on a single character but now on the party as a whole, there are no longer immediate game overs when the lead character dies.  Loot is no longer fixed as it was in Baldur's Gate, but now somewhat randomized - most encounters have at least one item drop that is picked randomly from a list each time one begins a new game, which helps prevent "powergaming" with one's party to a degree.

Icewind Dale also takes many efforts to better balance the class and alignment choices afforded to the player, unlike its predecessor.  Bards, for example, now have many exclusive abilities that can buff the party in battle, help them resist (or cancel) negative status effects, as well as unique pieces of weaponry and armor.  Druids, Paladins and Rangers, as well as Multi and Dual classes, are considerably more viable choices as the low level cap of Baldur's Gate 1 is no longer in effect.  Furthermore, many good pieces of equipment are restricted to particular alignments, encouraging the player to mix them up among their characters - a stark contrast to the Baldur's Gate games, where characters of alternate alignments would violently conflict with one another.  This unfortunately means that alignment has little impact in terms of storyline or player choice, but does allow the player to take advantage of spells and abilities they might not otherwise see in a pure "good" or "evil" character playthrough.

Efforts are made to give higher-level parties something to do as well.  There is an expansion that adds in a fairly large optional quest to undertake, recommended for parties at level 9 or higher, as well as an extra quest included in the final patch called "Trials of the Luremaster" recommended for even higher level parties.  One can also begin a second playthrough by enabling the "Heart of Fury" difficulty setting, which gives all enemies the player encounters a large boost to their HP (multiplying their default total by 3, then adding another 80 on top of that to be exact), but to compensate for this, they give out far higher experience totals as well.

High-level play is not without drawbacks of its own, though  Those who have played Throne of Bhaal can attest that it was a fairly long slog, with the player having little in the way of challenge to face aside from some foes that required cheesy tactics to defeat, not aided by the comically overpowered high-level abilities they were granted (such as turning every attack they fired into a critical hit, or summoning exceptionally powerful monsters like Planetars to aid them).  Icewind Dale does not have any such abilities and is thankfully much more of a well-planned experience; however, Baldur's Gate's hard experience cap of 8,000,000 is handled in an equally inelegant way here - by giving every class a hard level limit of 30.  This applies to each class for a Dual/Multiclass character, which means that single-class characters ultimately fall by the wayside in a high-level game in favor of Fighter/Mages or Fighter/Thief/Mages or Fighter/Cleric/Mages - effectively the opposite of Baldur's Gate 2's high-level power dynamic.

At the end of the day, Icewind Dale aims for a combat-driven Infinity Engine experience and ultimately realizes it quite well.  Those looking for a deep storytelling experience probably won't find much to enjoy here, but fans of large-scale tactical combat with a D&D bent and a heavy emphasis on dice rolls (and more than a little savescumming/rolling back to earlier saves) should have quite a lot of fun with Icewind Dale. 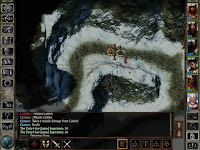 Developer: Black Isle Studios, Overhaul Games
Publisher: Interplay
Platform: PC, iOS, OSX, Android, Linux
Released: 2000, 2014
Recommended version: The 2014 "Enhanced Edition" updates the game into the Baldur's Gate 2 EE engine, allowing for a much greater number of class choices, reduced spell durations on many effects (most prominently Charm and Sleep) and a much less clumsy interface.  Higher resolutions are also supported, updating the title to modern standards, and party AI is much improved over the original releases, with many new options for adaptive AI that make party management significantly less cumbersome.