Heralded in its day as a highly enjoyable action-RPG and a worthy answer to Zelda, Crystalis is one of the more beloved genre titles of the NES era.  But does SNK's grand adventure still satisfy today, or is this one title that they've largely forgotten since for a good reason? 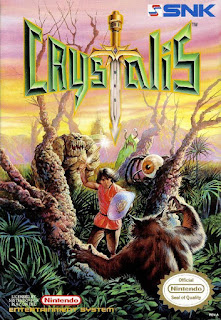 SNK is a well-known company among many retro gamers, largely remembered for the Neo-Geo system (both its home and arcade counterparts) and for producing a large of fighting games over most of the 1990s that utilized the Neo-Geo's hardware to deliver smoothly-animated, hugely detailed sprites.  Before all of that, though, they released a few relatively low-key games on the NES like Iron Tank, Ikari Warriors 2 and 3 and P.O.W.: Prisoner of War.

One of their few games that wasn't a port from an arcade title, however, was Crystalis.  An RPG that drew obvious inspiration from Zelda and Ys in its overall format - a top-down, action-oriented title with a large open world to explore and a significant emphasis on puzzles.  However, it also utilized many more traditional RPG elements, like having a magic meter to power a variety of spells, shield and armor upgrades that must be found or purchased over the course of the adventure, and an  experience meter that would rise as enemies were defeated, granting the protagonist a boost in HP, MP, attack and defense once they filled it and raised their level.  Status effects also cropped up, such as Poison (which slowly drained the player's HP) and Paralysis (which prevented him from attacking).

Something slightly unusual about the game was in its controls, which were unusually fast and smooth for games of this format.  Crystalis features full eight-directional movement, with the player able to adjust their facing on a moment's notice to attack enemies - a very good thing, as enemies, particularly late in the game, came at the player almost constantly and could do large amounts of damage with only a hit or two.  The hit detection is occasionally spotty, however, which can lead to some hits from enemies feeling "cheap" or your own attacks not registering at key moments, leading to some frustration.

Another major element of this was in the game's focus on the four Greek elements.  Many enemies and all of the major bosses in the game were themed after them, gaining immunity to some elements and only being vulnerable to others.  As the player ventured through the game, they'd find four different swords to match these elements, each with their own sets of special moves - the Wind sword could launch a powerful tornado to mow down enemies, while the Thunder sword could unleash a powerful full-screen attack that devastated all foes in range.  Unfortunately, at times this also led to particularly annoying dungeons where one room's enemies were vulnerable to a certain element, while those in the next room over (or even the same screen) could be completely immune, which led to frequent and annoying sword-swapping in order to make one's way through them.  This came into play with certain barriers as well, which could only be destroyed by a particular sword's magic attack.

Being an early RPG, much emphasis was placed on the puzzle-solving element as well. This not only frequently manifests as having to travel to various areas to locate a key item in order to proceed past a hazard one can't normally overcome, but also in having to figure out where and when to utilize particular spells or items.  One example is the Change spell, which allows the player to turn themselves into one of several forms in order to access areas they normally wouldn't be able to (such as entering a village where only women are allowed).

As per SNK's usual standards, Crystalis was quite a gorgeous game to behold in 1990, with intricately detailed backgrounds in some areas as well as smooth animations throughout, as well as some rather unusual (but distinct) palettes that made heavy use of greens and purples.  Some boss battles also utilized clever technical tricks to bypass sprite limitations and the like, such as the giant insect boss in the swamp area actually being a background layer instead of an ordinary sprite, allowing it to be displayed without flickering.

Crystalis is also notable for its setting; while it does have obvious fantasy influences, the setting is actually a post-apocalyptic one, taking place after a nuclear war that has left the world overrun with powerful mutated monsters.  Amidst all of this, an evil empire has arisen and is attempting to claim the power of the "Tower" in order to rule the world.  So while there is an obvious Wizardry/Dungeons and Dragons influence here, Crystalis seems to have been more heavily influenced by franchises like Fist of the North Star and Nausicaa of the Valley of the Wind than anything else.

While it has a few rough points and it shows its age in some respects, Crystalis nevertheless remains an adventure worth undertaking for genre fans.  Its fast-paced gameplay, as well as its inventive setting and puzzles, make it a game of interest for fans of 80s and 90s titles.  If nothing else, it's certainly worth a look to see a take on the RPG genre for a company known almost exclusively for fighters and action games, and a surprisingly competent one at that. 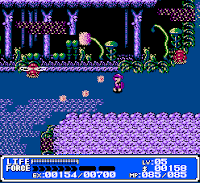 Developer: SNK, Nintendo Software Technology
Publisher: SNK, Nintendo
Platform: NES, Game Boy Color
Released: 1990, 2000
Recommended version: The Game Boy Color version of the title make several changes to the game's storyline and structure while adding in a few bells and whistles like digitized voice clips for key items and events.  However, it is also largely seen as an inferior version - enemies frequently attack the player from offscreen and the music is a significant downgrade from the NES version, quickly becoming annoying.  Much of the clever nuance of the original version's plot is also lost in this version, as the story is reworked to more of a generic "destined hero" plotline and the villains being more of a generic, nebulous evil force.  For those reasons, the original NES version is the superior experience.