ToeJam and Earl is a quirky, humorous, two-player take on the roguelike genre released on a home console, making it an unusual departure for the genre on several fronts.  But does this game succeed at providing a memorable and fun experience, or is this one randomly-generated adventure you can safely skip? 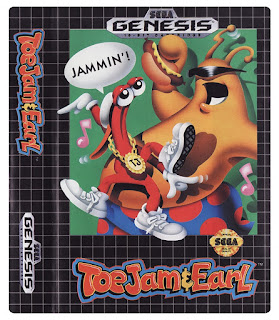 Greg Johnson is a name known to many fans of classic CRPGs, having helped develop the two Starflight games.  Said games were highly acclaimed in their heyday, featuring a vast and almost completely randomly-generated galaxy for the player to explore, encounter alien races and collect resources in.  Drawing obvious influence from Star Trek, but also the classic title Rogue, it proved to be a hit and remains a genre classic to this day.

After attaining some success with later EA projects, he and Mark Voorsanger (another Starflight 2 developer) formed their own studio and began to produce a Rogue-like title for the Sega Genesis, Toejam and Earl.  However, it would prove to be an atypical example of the genre - rather than being set in a medieval fantasy world, it would be set on modern Earth, and the protagonists would be two crash-landed aliens attempting to rebuild their ship and return home.  Playing on the unusual concept, quirky enemies like chickens with mortars, mad scientists and runaway ice cream trucks would become common sights in the game, and the powerups within it would be equally bizarre.

Treasure chests in the game take the form of wrapped presents, which can contain a variety of items that can help or hinder the player, and which items each box contains are randomized in each new game.  These include spring shoes allowing one's character to leap over hazards and take shortcuts, rosebushes to stop pursuing enemies, rocket skates that allow very quick (albeit hard to control) movement over both land and water, and the occasional slingshot or basket of tomatoes to defeat persistent enemies.  Negative ones include the "Total Bummer" (which instantly causes one to lose a life), a raincloud that depletes the player's health for a short period, or, perhaps worst of all, the Randomizer, which scrambles the effect of all gift boxes and forces the player to start from scratch figuring them all out again.

Money also makes an appearance in the game, though as in most rogue-likes, opportunities to spend it are somewhat scarce.  The most prominent use is to order various one-use items from mailboxes, but a few others exist as well.  One can pay a wizard to fully restore their character's HP, for example, or pay a "wiseman" two dollars to identify a present without having to open it themselves, sparing them some risk.  Finally, and most humorously, paying an opera singer three dollars will cause her to sing, instantly destroying all enemies on-screen at the time.

Also unusually for the genre, Toejam and Earl does not reward the player based on defeating enemies; as weapons to defeat them are relatively rare, the player is instead encouraged to avoid them entirely.  Instead, experience is earned by exploring the maps and opening presents.  When enough points are gained, the player's "rank" increases (starting at "Weiner" and slowly working up to the top rank of "Funkmaster") and their character's maximum HP increases.

Another unusual trait of Toejam and Earl is that it features support for two-player cooperative play - one player controls Toejam and the other controls Earl, and when they move far enough apart onscreen, the game shifts into a split-screen mode, allowing them to cover more ground in a shorter period of time.  This proved to be a surprising technical achievement for the Sega Genesis platform, and its inclusion makes it one of the better co-op games on the platform.  Both characters also have slightly different abilities, with Toejam moving slightly faster while Earl starts with slightly more health.

Those unused to randomized challenges have an option to play the game as well.  Toejam and Earl offers a "fixed" game world, where ship parts and maps are the same each time the game is played, which removes a significant random element from the adventure and generally makes it easier to complete.  However, presents in the games are still randomized, so it works well as a warm-up for the main attraction, in which all items, enemy positions and maps are generated from scratch each time the game starts.

When all is said and done, Toejam and Earl is a competent and atypical roguelike on the Sega Genesis, managing to carry the genre's randomization and high level of challenge and make it accessible to console gamers.  Its overall gameplay is somewhat slow paced, but it still manages to be a very entertaining romp, especially for two players.