NieR:Automata marks Yoko Taro's return to the NieR franchise after the closing of Cavia, with development farmed out to highly-acclaimed action game studio PlatinumGames.  But does this blend of character action, RPG and Taro's twisted writing prove to work out for the best, or does it fall short of being anything but a cult classic? Yoko Taro and Cavia attained a bit of a cult following beginning with the Playstation 2 era, mostly becoming known for the Drakengard series - games known for their dark themes and complex ideas, but relatively lackluster gameplay, being little more than an overly repetitious Dynasty Warriors style beat-em-up at its core.  In 2010, Cavia also released an action-RPG named Nier, released in two versions across the Xbox 360 and Playstation 3, which finally gave them some mainstream critical success; unfortunately not enough for them to stay in business, however, as the team was disbanded the same year and absorbed into its parent company, AQ Interactive (now Marvelous AQL).

While set in the same world as the first game, NieR: Automata is not a direct sequel; in fact, it's more of a thematic sequel than anything, carrying on its questions about identity and morality, but in a much different context and against the framing device of a global war against a bizarre alien species.

The original game also clearly had a strong action element, largely taking place in real-time and giving the player a short-ranged weapon and a long-ranged Grimoire that could be used to attack foes from a distance with a rapid-fire barrage of projectile attacks.  The same remains true here, though the gameplay has also been substantially reworked.  It now feels much more like a character action game, giving the player access to a large variety of weapons and basing combat around intricate  combinations of attacks to maximize damage and show off visual flair; knocking enemies back, launching them into the air to put the player in a more advantageous position, and doing last-minute dodges to evade melee attacks being common sights.  Some extra abilities are also present via the Chip system, allowing the player to bolster damage output, gain extra HP, allowing auto-healing when enough damage is taken, and even being able to "parry" enemy attacks with well-timed joystick movements, temporarily putting the enemy off-guard.

One can also customize their secondary weapon (called a "Pod" here) in a variety of ways.  By default it fires a rapid barrage of shots, but it can also launch barrages of missiles that home in on a target, or a constant laser that deals more damage as it stays centered on a target.  Each pod also has a customizable secondary attack, which can be customized in its own right - the default being a heavily-damaging beam that destroys all enemies in a line.  Others include an area-effect hammer, a spinning pod around the player that delivers weak (but rapid) short-ranged attacks, and even a barrier that blocks melee attacks for a short time.  Each has a lengthy cooldown after a use, though its duration can be reduced by certain chips.  Overall, this allows the player to customize the game to their fighting style, or adopt a new strategy for a particularly troublesome enemy.

Further adding to the game's variety, some story segments also play out like an overhead shoot-em-up, either flying straight ahead or giving the player freedom to move in one direction and fire in another a la Robotron 2084.  These are generally rather short, but no less impressive on a visual front, making them a nice break from the main combat engine and open-world format of the game.

Of course, there are plenty of traditional RPG elements as well.  In addition to the main storyline, the game presents numerous sub-quests to complete, which expand upon the game's lore and often grant useful rewards - cash, new chips, and rare and powerful weapons being rewards for some.  A crafting system is present as well, allowing the player to refine obsolete chips into more powerful and useful ones and upgrade the various weapons they find by scavenging materials from the world and defeated enemies.  Oddly, the latter also ties into the lore element of the game as well; each unique weapon has a small "story" associated with it, and more of it is revealed as the weapon gets upgraded.  There are also numerous story paths and endings depending upon the player's choices, which gives it some significant replay value.

NieR: Automata also contains a death mechanic somewhat similar to the Dark Souls games; upon death, the player drops all of their equipped chips and loses some experience, and must travel back to where they died and touch their body to recover them; however, if you die again before recovering your body, that experience and all the chips you had equipped when you originally died are lost for good.  The player also has the option to revive their old body as a temporary ally, which will help them fight for a short time and may give them the edge they need to defeat whatever foe killed them in the first place; however, there is also a small chance that your revived body will actually turn against you, requiring you to fight it instead.  If network mode is enabled, the player can also find the bodies of other players in the locations where they died in their game, and can in turn revive them, recover items from them or "pray" to heal them in real-time in their game.  Thankfully, there is no option for other players to "invade" your game and hinder your progress beyond the small chance that a revived body may be hostile, and if you don't like this feature, you can turn it off at any time so that only your own character's body will appear.

Of course, no review of NieR: Automata can go without mentioning its aesthetics.  Simply put, Automata is a game that draws you in with a brilliantly realized post-apocalyptic setting and a haunting and beautiful atmosphere in its combination of familiar and alien elements.  The soundtrack by Keiichi Okabe and Keigo Hoashi is utterly amazing, complementing the mood of the game perfectly and lending a grandiose feel to its action and scale.  Even more impressively, the audio is designed in such a way that music tracks seamlessly transition into one another, meaning a calm track from a serene ruined city can quickly give way to a hard-driving, choir-backed epic feel when one gets into a fight against a particularly strong foe.  Equally impressive is its voice cast, with Kira Buckland as 2B and Kyle McCarley as 9S doing an incredible job of bringing their characters to life and making the player truly take the journey with them.

In short, NieR: Automata is a very enjoyable game, polishing up the lacking elements of its predecessor while losing none of its intelligent themes or heavy mood in the process.  Its blend of intense action, amazing aesthetics, credible characters and a truly surreal atmosphere and environment to explore make it a game that is not just a joy to play, but an interactive experience that quickly captivates the player's imagination and takes them for a ride.  The more I played it, the more I got enthralled in its world, and while it is a bit grindy and frustrating at times, it is nevertheless a very captivating journey.  Highly recommended. 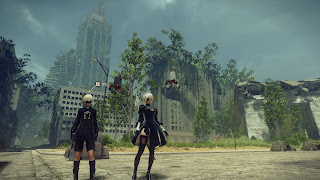 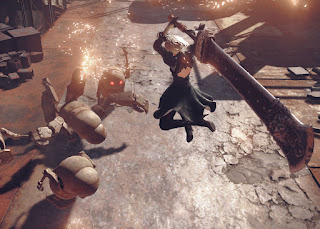 Developer: PlatinumGames
Publisher: Square Enix
Platform: Playstation 4, XBox One, PC
Released: 2017, 2019
Recommended version: The PC version of the game does have prominent issues in some areas, with the game occasionally slowing to a crawl in sparsely-populated areas and reported freezes, crashes and other general issues.  Square Enix themselves have not issued any kind of patch to fix this, though there is a fan mod called "FAR" that addresses some major bugs and allows greater customization of the game for a smoother experience (though I still hit major slowdown at times even with it).  Those without a beefy PC or a taste for tweaking can just as easily stick to the PS4 or XBox One versions, however, which provide a generally smoother experience.