Ys: The Oath in Felghana

A remake of the much-maligned third game in the Ys series, Wanderers from Ys, which attempts to rework its gameplay into a more traditional series feel while amping up the speed and overall polish of its gameplay.  But does this remake prove to be superior to its original version, or is this just another Ys game to write off as a loss? 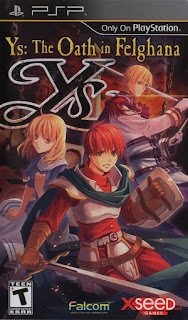 Wanderers from Ys, the third game released in the franchise and one of the few to get a North American release in the 1990s, is generally considered to be the black sheep of the Ys franchise.  It attempted to change the gameplay into a 2D sidescrolling platformer, somewhat similar to the second game in the Zelda franchise but with more of an RPG bent - buying equipment, finding magic items to aid in combat, utilizing healing items and magic rings to aid the player, and so forth.  However, it was also plagued by a number of problems - level layouts were often confusing due to the 2D layout, and a lack of post-hit invulnerability meant that any enemy in the game could drain huge chunks of the player's health at the slightest contact, if not kill them outright.  Indeed, even with a maxed out level, the final bosses could easily kill the character in a fraction of a second and required absolutely perfect positioning to harm without being harmed, making Wanderers more of a test of save-scumming and patience than genuine skill.

It's little surprise, then, that when the series had its resurgence in the late 2000's, Wanderers from Ys would be the first game slated for a remake by Falcom.  The side-scrolling format was dropped entirely and the game would now utilize the same format as Ys VI: The Ark in Napishtim - viewed from an overhead perspective, working in some platforming elements, but mainly focusing on fast-paced combat.

To that end, the player is now actively rewarded for quickly and efficiently defeating enemies.  As the player lands hits on enemies they will build up a multiplier that grants them extra experience from defeating foes, up to 1.99 times the normal amount; however, they most consistently attack and kill enemies within a set time period (indicated by a bar near the health bar) or they will lose this multiplier.  Aiding this, enemies will also randomly drop power-ups that expire after a short time unless the player collects more powerups that bolster them, and these will further bolster Adol's stats, giving him extra attack power, defense and magic damage while they last, or simply restoring a small amount of HP.  All of this allows the player to effectively tornado their way through swarms of enemies, starting with weaker ones but quickly working their way up to tear through stronger ones, and makes combat in the game immensely enjoyable.

Further compounding the combat's character action feel is a super meter that slowly builds as the player defeats enemies.  Filling it completely allows the player to press a button to activate a "Boost mode" that affords them greater attacking speed and invulnerability to damage for a short period, letting them get in some heavy damage on stronger foes (and particularly bosses).  This is further compounded in the PSP version of the game, which incorporates a "Double Boost" - filling the meter twice before activating it will give an even larger boost to damage as well as allow Adol to recharge some lost HP while it is active, giving him an even greater edge against bosses.

The magic rings from Wnderers are gone as well, now replaced by three spells that increase in power throughout the game by collecting gems.  Namely, these are a wind spell (which grants gliding as well as a multi-hitting spin attack), a ranged fireball attack, and a ground-based dash that pierces through enemies and deals damage.  Each can also be charged up for added damage and effect (adding a multi-hitting explosion to the fireball, for example), and each is used in specific places throughout the game to clear obstacles or acquire normally unreachable treasures, giving a bit of a Metroid or Zelda element to the game as well.

Of course, with such fast-paced gameplay comes some very intense boss battles, which at times resemble a "bullet hell" shooter or even some of the more intense fights from games like Devil May Cry and Bayonetta, with waves of projectiles and constant barrages of attacks that require precise jumping and dodging to avoid, and brief windows for the player to get in attacks of their own.  Honed reflexes and an eye for pattern dodging are required, especially on the higher difficulties where one quick combination can deplete your health and send you to the game over screen.  Still, the bosses and their patterns almost never feel unfair or "cheap", so they're generally fun rather than frustrating.

The game's main campaign is a fairly short one, clocking in at only about 10-12 hours for a first playthrough.  However, the multiple difficulties add some replay value, as does another feature - the Boss Rush and Time Attack mode.  Boss Rush challenges the player to defeat all of the game's bosses back-to-back, while Time Attack is the same but adds a timer to the challenge, allowing them to see how quickly they can pull off this task.  Two optional bosses exclusive to these modes can also be unlocked by completing Time Attack and completing the game on the hardest difficulty, which provide a new level of challenge to even the game's most fervent players.

In short, Oath in Felghana takes the much-maligned third Ys game and turns it into something truly special - no longer a mediocre and frustrating exercise in save-scumming and outwitting enemy AI, Oath is a spectacular, fast-paced action-RPG with elements of a character action game worked in - intense boss fights, rewards for racking up chains of defeated enemies in a short period, and plenty of bonuses and new challenges to unlock to truly test one's skills.  It may not be the deepest game of its kind out there, but it is immensely fun to play and easily my favorite game of the franchise. 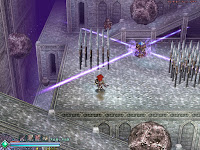 Developer: Nihon Falcom
Publisher: XSEED Games
Platform: PC, Mobile, Playstation Portable
Released: 2017
Recommended version: The PSP version is definitely the one to play, featuring everything from the PC release as well as some exclusive features.  The aforementioned Double Boost is one, as are some added "new game plus" options that let the player carry over some unlocked bonuses and levels from their previous playthrough (the higher the difficulty, the more they can carry over).  Most prominently, however, this version features full voiceover for the main cast with names like Jamieson Price, Heather Hogan, David Lodge and Derek Prince behind the characters.