A relatively slow-starting franchise for Atlus, Etrian Odyssey was built as an old-school dungeon crawling experience that recalls the experience of numerous 80's franchises to a T.  But does a game like this still hold any appeal today, or does it attempt to resurrect a type of game that should have remained in the past? 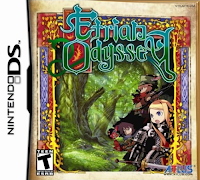 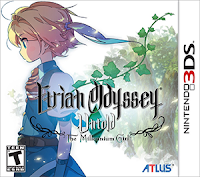 While most JRPGs can trace their roots back to a common source - Wizardry, Ultima, the Bard's Tale, and other early RPG franchises released on various computer platforms in the 1980s - few of them still bear much resemblance to that format of gameplay at all.  Most are no longer viewed from a first person-perspective, battles tend to be smaller in scope (with no more than five or so enemies in any encounter, whereas Wizardry-likes could easily put the player against a dozen or more) and overall being more of a story-driven, cinematic experience than one centered on exploration, finding loot and powering up characters.  These elements still exist, of course, but they generally take a backseat to the storytelling aspect.

Etrian Odyssey, on the other hand, is an unashamed callback to the early days of role-playing games.  There is little in the way of characterization and only a threadbare plot throughout, characters are all generated by the player and must conform to a handful of archetypal classes - Landsknecht (Fighter), Alchemist (Mage), Medic (Cleric), etc. - and animation in the game is relatively minimal, with virtually every character, enemy and foe alike represented by a single static sprite.  While there is some customization afforded to the player in the skills they can pick for a particular class (such as specializing in a particular type of weapon or spell element), this is very much a game built on the standards of 1980s gaming.  Some other, less-savory elements creep in as well, like rather slow character movement and somewhat lengthy combat animations that cannot be skipped, which get just a touch annoying when you end up seeing them thousands of times over the course of the game.

Also similar to games like Wizardry, nearly all of the game's action takes place within a single, sprawling dungeon comprising 30 floors - 25 for the main game, and an extra five containing a postgame boss that requires a very heavily-trained party.  Throughout each floor, the player encounters not only progressively stronger enemies, but a variety of subquests, traps, hidden passages and bosses - both in the form of minibosses named "FOEs" that patrol the map (and generally are so strong that they must be avoided at first), and designated floor bosses that will bar their progress until they power up enough to defeat them.  The game's overall design is also heavily based on classic norms - one can only save in towns or at very specific points at the beginning of each five-floor segment of the dungeon, which means that you tend to do an awful lot of backtracking as your resources run thin, and may end up redoing large segments of the dungeon from scratch if you get caught by an FOE.  Much emphasis is also put on the grinding element - not just in terms of levels, but by collecting loot from enemies to sell at a shop in order to earn money and unlock new equipment, which in turn gives your party better odds to reach even further into the dungeon.

One clever touch is that the game includes a minimap, but unlike most games of this type, it is not filled in automatically - instead, the player must draw it in themselves on the DS's bottom screen, using the stylus to fill in walls, mark traps and chests, and indicate enemy locations and patrol routes.  Indeed, even the game's first quest requires the player to create a mostly-complete map of the dungeon's first floor before they are allowed to proceed deeper in, getting them used to this mechanic.  A clever throwback to the early days of CRPGs, where the similar-looking dungeons and lack of integrated mapping features meant that players would often draw out their own maps on graph paper.

This is not to say that the game is completely stuck in the past, as some more modern elements creep in.  One prominent addition is that player can retire existing characters in order to create new ones, with some residual stats and levels carrying over from the old character and allowing the new character to reach new heights of power that their old ones simply could not, somewhat similar to the Reincarnation mechanic in the Disgaea games.  If a particular skill loadout proves too detrimental, the player also has the option of allowing a character to "rest" in order to reset their skills.  This comes at a price, however - the character loses five experience levels each time they do this, and considering how long those take to build up in this game, there is a strong incentive to get the loadout right the first time through.  The game's score is also provided by perennial favorite Yuzo Koshiro, and as per his standards, it is quite excellent throughout.

In the end, Etrian Odyssey accomplishes what it sets out to do, creating an old-school dungeon crawler experience reminiscent of games like Wizardry, Might and Magic and Bard's Tale in almost every respect.  Fans of that genre - and all of the frustrating elements that come with them - will probably have some fun with Etrian Odyssey, but those more used to a smoother gameplay experience less centered on grinding and trial-and-error may want to give it a pass.  Or go for one of the later entries or remakes in the series instead, which feature a much more streamlined and smooth experience overall.

Developer: Atlus, Lancarse
Publisher: Atlus
Platform: Nintendo DS
Released: 2007
Recommended version: The original version is only available on the Nintendo DS.  However, the 3DS remake (Titled "Etrian Odyssey Untold: The Millennium Girl") features the original game with some quality of life improvements, including the ability to fast-travel to floor exits one has reached, 3d-modeled enemies, and the option to have much faster combat animations and text speed.  It also features a new story mode that gives the game more of a running narrative, as well as introducing new characters with two exclusive classes (Highlander and Gunner).  For those reasons, I recommend the remake over the original release.