While the original Parasite Eve found its feet as an action-RPG drawing cues from popular horror titles of the time, its sequel very much takes the opposite approach, becoming a straight survival horror experience with a few RPG elements mixed in.  But does this end up making it a better game in the end, or does it just lose what made the franchise unique? 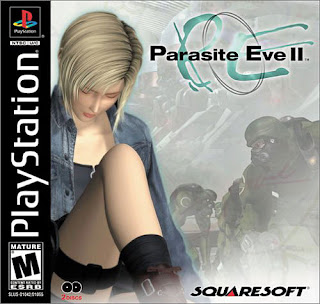 Parasite Eve, billed as "the Cinematic RPG", was a surprise hit for Square, combining their strength - RPGs - with elements of games like Resident Evil and Dino Crisis, allowing them to put their own spin on the genre while keeping to their norms of storytelling and deep customization to provide a distinct and memorable game experience.

Rather ironic, then, that its sequel would very much go down the opposite path.  Parasite Eve 2, while it continues the story of the first game and even carries over some design cues from it, is now much more of a traditional survival horror title.  Fixed camera angles, limited ammunition, a heavy emphasis on item-finding and puzzle-solving, and of course the infamous "tank controls" that require the player to press up to move forward and left or right to rotate, which felt more than a bit dated in an era where analog controls were rapidly becoming the new norm.  While some elements of the RPG genre are maintained, like spells, MP and even a shop system (more on each of these below), there is definitely a much greater emphasis here on maintaining resources and mastering the finer points of the controls than there was in the first game.

As mentioned, the game does at least retain some RPG elements.  The most prominent of these is an experience system - by defeating enemies, the player earns experience, which in turn can be used to unlock new Parasite Energy abilities (essentially spells) for a variety of effects.  Some of these return from the first game, like the ability to restore Aya's HP with Healing or do extra damage with bullets with Energy Shot, but many are new as well.  In fact, in another odd-change up from the first, these all fit within the four Greek elements of fire, water, earth and wind, and rather than simply being single-target effects, actually have zones of effect somewhat similar to spells in games like Diablo.  Combustion, for example, causes two waves of fire to launch out in front of Aya at an angle, then close in, burning any enemies they touch, while Energyball creates three electrical orbs that rotate around Aya, damaging any enemies they touch.  Each element has three spells, each of which has three levels of power, and by buying or upgrading any of them, Aya's maximum MP will be increased.

In another changeup, however, Aya's HP and damage output are not affected at all by experience levels.  These are determined solely by the equipment the player chooses to equip Aya with, with weapons they find varying significantly in overall damage, fire rate, and special effect (such as having different ammunition types that deal more damage).  As a general rule, though, pistols are the weakest weapons but use common ammunition and frequently get critical hits, making them ideal for weaker enemies but virtually useless against bosses.   Shotguns have a spread effect that can hit multiple enemies in close quarters, machine guns and submachine guns can deal heavy damage but eat ammunition quickly, and grenade launchers are very powerful but ammunition for them is hard to come by and relatively expensive to purchase, making them best saved for stronger enemies and bosses.  Weapon modification still exists, but is limited to predefined attachments that grant added bonuses like extra ammunition capacity or adding a bayonet for a powerful melee attack - a far cry from the in-depth customization of the original that let you build some amazingly destructive weapons.

What weapons the player uses throughout the game is ultimately a matter of preference and personal strategy, but the single biggest determinant factor for what play style they undertake is the armor they choose.  Different suits of armor grant different benefits, such as extra HP, more quick-slots for accessing items mid-battle, or resistance to certain status effects.  Those inclined toward a more traditional, Resident Evil styled experience can go for choices that grant extra HP and boosted fire rate, for example, while those who wish to have a more "mage character" style of gameplay can go for armor that bolsters MP and grants benefits like MP regeneration over time.  Some items can also be equipped to quick slots to add extra benefits, like a slight boost to maximum HP, extra weapon damage or resistance to a particular status, in turn adding a bit more strategy.

The game is not completely steeped in survival horror's emphasis on conserving resources, however.  While many items are found in the field, the player also has the option to purchase ammunition and upgrades by collecting "Bounty Points", earned by defeating enemies.  Boxes littered throughout the game also contain an unlimited supply of basic 9MM ammunition, allowing the player to use pistols and machine pistols as much as they wish provided they are relatively diligent about revisiting said boxes to keep their supplies up.  In another odd reversal from survival horror norms, avoiding enemies is actually discouraged - you actually lose BP if you leave a screen without killing all the enemies, which in turn encourages you to stand and fight any foes you encounter rather than try to avoid them.  In fact, enemies will frequently respawn in visited areas after story events, allowing the player to backtrack and deliberately encounter them again to rack up more BP - all but essential if you're going for the highest rankings, which require a set amount of points to be earned.

As is standard for the genre, inventory  management is a significant part of Parasite Eve II's gameplay as well.  While inventory space isn't as limited as most of the Resident Evil titles, you do still have a limited number of inventory slots to contend with, and storing useful items for the later, tougher stages of the game becomes a key part of one's overall strategy.  Befitting this, there are numerous areas in the game where items can be dropped off and retrieved later; however, you do not keep access to all of them throughout the game, meaning that leaving items in some areas and then moving on to the next chapter of the game can result in them being lost, so care must be taken to transfer useful items over before moving on.

In another nod to survival horror norms, Parasite Eve II is not a particularly long game, clocking in at roughly twelve hours once the player figures out how to get through the various puzzles.  However, replay value is introduced by unlocking new content each time the game is completed.  New equipment becomes available depending upon the rank the player attained in their previous playthrough, with new weapons, armor suits, attachment items and the like being unlockable.  One particularly humorous addition here is Squall's Gunblade, which can be unlocked under certain conditions.  While it can fire bullets and use a melee attack, both are rather weak; however, with a combination of a swing and a timed press of the trigger button, one can inflict massive damage, mirroring the timed attack mechanic from Final Fantasy VIII.  The game now also allows the player to skip cutscenes, which makes subsequent playthroughs much faster.  In a flip from games like Resident Evil, though, your final rank is not determined by things like how often you heal and how quickly you complete the game, but solely based on how many points you score, so eliminating as many enemies as possible (and playing on higher difficulties) will determine what items you unlock.  More game modes are also gradually unlocked, including Bounty Mode (stronger enemies and more frequent GOLEM encounters), Scavenger Mode (Aya is weaker and the gameplay is much more centered on finding random items from enemy drops) and Nightmare Mode (an extreme challenge with low HP, powerful enemies everywhere and very few shops).

As was standard for Square games of the time, Parasite Eve II looks amazing for a PS1 title, with character models looking much less plasticy than the first game's, immaculately detailed prerendered backgrounds, and even some killer details like seeing characters reflected in windows and polished marble floors.  The cinematics - one of the first game's selling points - remain as stellar as ever too, allowing for some grotesque transformation sequences and even a very clever opening sequence where a model of Aya walks toward a building, scrolling a prerendered FMV beneath her as she goes to great cinematic effect.  The soundtrack, while not quite as effectively chilling as the first, also fits within survival horror's sensibilities, lending subtle tension to the horror of the environments and scenarios the player encounters.

In the end, Parasite Eve II is a bit of an odd duck, taking what made the first game distinct and discarding most of it in favor of a more traditional and popularized format.  While it is a more polished game in some respects (with less potential to make game-breakingly powerful character builds), whether it's a better game than the first is a matter of preference that boils down to which the player likes more - RPGs or survival horror games. 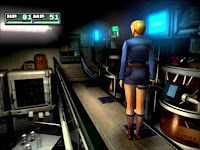