Ys IV: The Dawn of Ys

One of four different imaginings of the fourth game in the Ys franchise, Dawn of Ys was the first to see a release on a CD-based format.  But does Hudson's take on the series do the franchise justice, or is this one Ys game that's remained in relative obscurity for a good reason? 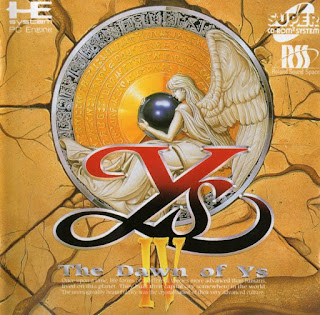 The history of Ys IV is an odd one, with two different versions developed by different companies and released on separate platforms in the mid 1990s only a month apart from one another.  A third version followed years later on the Playstation 2, developed by yet another company (Taito), and finally, nearly a decade after that, Falcom created their own version, replacing all of the previous Ys IV games as part of series canon.  But while all four versions of the game follow more or less the same storyline, they are all very different in terms of how the world is laid out and how the story is presented.

Hudson's interpretation on the PC-Engine CD-ROM2 (Japanese Turbografx-CD) is easily the more impressive of the two 1990s versions, however.  Not only does it utilize the capabilities of the CD-based format to add CD music (overall very nice, though it oddly resembles music from the early Pokemon games at times), animated cutscenes and voiceover to key moments of the narrative, but the extra storage space is put to good use to deliver a grandiose game in almost every respect.  The amount of equipment to find, items to buy and utilize, and areas to explore is easily on par with other highly-regarded RPGs like Dragon Quest, Phantasy Star and Final Fantasy II, but without losing any of the distinctive feel of Ys.

The game also feels like a reunion of sorts with the first two Ys titles.  Not just in the fact that it does away with the sidescrolling platformer layout of Wanderers from Ys, but in many of its core game mechanics.  Touch-based combat returns, requiring that the player attack enemies from a favorable angle or potentially have their health drained at a staggering rate.  Proper spells and magic return from Ys II as well, allowing the player to do things like fast travel, throw fireballs at enemies or even temporarily transform into a monster to avoid combat or occasionally get useful clues and items by talking to monsters.  Even the magic rings return from Ys I, allowing for elements like a steady magic recharge or HP regeneration in dungeons while they're equipped.  The player even briefly returns to Esteria - Ys 1's setting - for a couple of story events, seemingly some reassurance from Falcom that yes, Wanderers's format is not coming back.

For all of its content, however, Dawn of Ys is also a well-paced and intuitive game.  There were few times where I was left wondering where to go next, and as ever, the fast-paced gameplay ensures that, though you do end up doing quite a lot of backtracking and wandering through convoluted maze dungeons, the game never feels especially tedious.  Even gold and experience grinding, while still a common element of the game (and genre as a whole) in this time period, goes at a surprisingly fast clip, and I actually didn't mind doing it whenever it came up.

Not to say that the game does not contain some frustrating elements.  As is standard for early games in the series, enemies can very quickly drain your health if you're caught off-guard or pushed into a corner, as can some of the nastier boss attacks.   Trying to attack them during a moment when they're not vulnerable and coming in contact with their hurtbox will also deal massive damage to the player. For these reasons, learning where and when to attack enemies, and being constantly on guard, are key parts of the game's strategy.  One particularly frustrating segment involves a small escort mission over a series of flame traps, requiring the player to not only avoid being caught by them (which results in instant death), but making sure the character following them is squarely on a safe zone before the fires flare up as well, because if he gets hit, it's game over for you.   While thankfully not overly long (and you only have to do it twice, the second time without the escort aspect), I nevertheless got pretty annoyed with it.

Some other elements at work help to mitigate the frustration factor of Ys's notoriously quick deaths.  The player is still able to save their game at any time (sans during boss battles) and you are given a whopping fifteen slots to use, allowing you to easily return to an earlier point if you somehow get yourself into a situation you can't easily get out of.  More importantly, the game actually has the courtesy to skip leading cutscenes and dialog after dying to a boss - a very big plus that, for some odd reason, wouldn't become a standard feature of the genre for almost a decade after.

In the end, Ys IV is not just a return to form for the series, but a significant step forward as well.  While it hits many of the earlier games' familiar cues, each one is accompanied by a step forward, resulting in a game that, while it retains the fast pace and actiony nature of the franchise, also provides enough content to keep the player entertained for a good while.  It was even one of the first games I know of that contained a "new game plus" feature - by completing the game, the player gets access to a Developer's Room full of commentary from the game's creators, and they are given the option to restart with the Gold and Silver bracelets in their inventory from the outset (which double experience and money earned, respectively).  Even the fanbase for the Ys series recognizes this one is something special, as it's a rare instance of a game that has not only had its text fan-translated into English, but its voiced dialog dubbed to match.  While said voiceover isn't of the highest quality (and is at times hard to make out over the in-game music), the fact that there is enough love for this game to put in that level of effort to localize it, even in an unofficial capacity, really speaks to its quality.  Highly recommended. 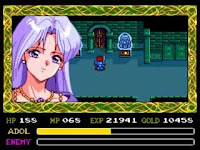