Ys IV: Mask of the Sun

Mask of the Sun is an alternate take on Ys IV's storyline, masterminded by Tonkinhouse and released exclusively on the Super Famicom, making it the only version that isn't on a CD-based system.  But does this version of the fourth Ys entry stand on its own, or does it pale in the shadow of its counterparts? 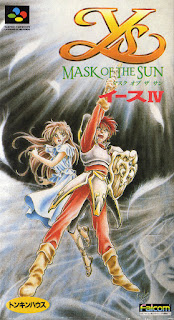 The second version of four versions of Ys IV released, Mask of the Sun was created by a muh less well-known studio (Tonkinhouse, mostly known for sports games).  Strangely, this was also considered to be the canon version of Ys IV until nearly two decades later, when it was supplanted in the series' timeline by Falcom's own Memories of Celceta.  This would seem to suggest that Falcom considered this the superior version of their script.

With that in mind, as well as starting in on this game fresh off completing Dawn of Ys, I naturally couldn't help but draw comparisons between the two.  Mask of the Sun, naturally restricted by the limitations of cartridge ROMs, is a significantly smaller and shorter game and lacks the voiceover and animated cutscenes.  But what surprised me more is the fact that Mask of the Sun is also significantly more linear; the entire game is almost entirely straightforward, with very few chances to go down an alternate path and end up in a new area one isn't supposed to go yet.  Even the dungeon designs fall prey to this for the most part, with most dungeons throughout simply being linear corridors with only the occasional alternate path that leads to a dead end with a treasure.  One early dungeon in particular literally has three doors to choose from at one point, with the first two you see leading to treasures while the third is the path forward.  Only near the end do the dungeons get to be more of the convoluted variety and take a significant amount of time (and trial and error) to navigate through.  Even backtracking in the game is somewhat rare, with only a few instances of having to return to a previous area in order to unlock or reach a new one, which stands in stark contrast to Dawn of Ys where it was a relatively common event.

On a storyline front, both games follow the same overall plot and even hit many of the same story cues throughout, but Mask of the Sun is considerably more condensed, with several of Dawn's key events happening off camera or being quickly glossed over in Mask.  The central villains also have their motivations significantly changed up, and some (such as Dawn's main villain) are omitted entirely, making the game feel significantly smaller in scope.

Ys IV's combat, however, is somewhat more refined.  As in the first two titles (and its inspiration, the Hydlide games), the player has significantly luck doing damage if they attack the enemy from an angle or make contact with them from behind or the side; attempting to attack them head-on will often result in the player taking damage instead.  As enemies do tend to move quickly, the player needs to react just as fast to catch monsters at a favorable angle and come out ahead.  Of course, if caught at a bad angle the player can also easily be comboed to death in relatively short order, but the ability to save at any time, as well as much quicker HP regeneration than in Dawn, mitigates much of the frustration inherent to this element of design.

The magic system returns here as well, though in a significantly more limited form.  The wing item from Ys 1 returns for fast travel purposes, while other spells are tied to magical swords one finds throughout the adventure.  Three of these function as projectile attacks (The Emberwind, Thunder and Sleetwind swords) while one actually has a costly, but useful healing effect (the Hero's Sword).  Each of the elemental swords can also be powered up by finding a matching jewel and having it embedded in the hilt for a decent bit of money, though I found that the upgrades didn't make a huge amount of difference in practice.

As per series standards, Mask of the Sun once again has excellent music.  While obviously not as high-quality as Dawn of Ys (owing to the CD audio capabilities of that system), Tonkinhouse still did an excellent job here, utilizing the SNES' unique capabilities to provide a stellar, energetic score througout.  In fact, more than a few tracks reminded me of other well-regarded SNES titles like Mega Man X; no bad thing by me as those are some of my favorite games to this day.

Some less savory elements of design also creep in here.  Dialog and plot scenes can't be skipped, which gets a bit annoying late in the game when the boss fights start to become very difficult and require several attempts to get through and you end up having to scroll through several screens of text before each attempt.  Said boss fights also tend to feel more than a bit "cheap", as you can easily get boxed into a corner and comboed to death with no chance of escape, or only reveal their weak points for a brief moment before immediately following up with a combination of attacks that can drop your heatlh to nothing.  Indeed, I won the penultimate boss fight by simply rushing him during his brief moment of vulnerability and draining all of his health before he did the same to me, which felt just a bit off for a game of this type.

I'm probably making it sound like I dislike Mask of the Sun, but I really didn't; I enjoyed it for what it was and actually had a lot of fun throughout the adventure (save for said particularly annoying boss).  But the biggest, overarching problem I had was that I made the mistake of playing Dawn of Ys first, which trumps almost every aspect of its design due to having a more prestigious name behind its development, as well as the benefit of hardware more suited to a grandiose RPG experience.  Both titles are worth a look for fans of the Ys franchise to see how a story and overall game can be interpreted in two very different ways, but from my perspective, Mask is just not as good as its counterpart on the PC Engine CD-ROM2. 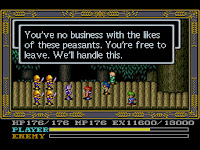 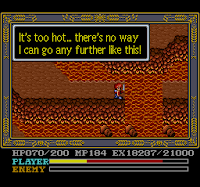