Released two years after the first Dark Cloud game, Dark Cloud 2 attempts to polish up its predecessors' weaknesses and provide a much more substantive experience overall.  But does Dark Cloud 2 succeed where its predecessor failed, or was this another game fated to be largely forgotten once the hype of its release blew over? 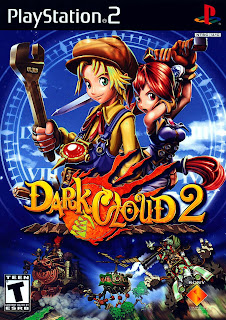 The original Dark Cloud, while a relatively successful game in terms of scores and sales (enough to get on Sony's Greatest Hits program, at least), was not a game built to last; its gameplay was somewhat clumsy and the hype of its marketing as a "Zelda killer" didn't hold up to close scrutiny, not least because they really don't resemble each other much at all.  But the experience did prove to be a valuable one for Level-5, launching their career as a big-name developer, and as is the case with virtually any successful game, a followup was inevitable.  So two years after the first, Dark Cloud 2 ("Dark Chronicle" outside of North America) was released, promising to add more to the formula that the first game established while polishing up its weaker elements.

This is evident right from the get-go, as the game's overall aesthetic has been drastically reworked.  While the first game was dark and moody with an art style to match, Dark Cloud 2 is very bright and colorful, utilizing lavishly detailed environments and soft cel-shading, as well as a more whimsical and cartoony world, to give the game a much lighter and friendlier feel.  Indeed, every area of the game seems geared to use this fact to its full advantage; very few areas in the game have drab interiors, giving the player plenty of fine details to look at as they explore the game and rebuild its world.

Dark Cloud 2 makes great strides in improving the original game's relatively minimal audio design.  From ambient sound in towns to give them a more alive feel to virtually every enemy the player encounters having unique complement of voice and sound clips accompanying them, there is definitely much more to hold your attention here.  The game also features voiceover of relatively high quality during its story scenes, featuring even a few big names like Paul Eiding, Cam Clarke and Jennifer Hale in supporting roles.

While the core format and design of the game remains relatively intact, there have been many improvements made to it in almost every facet.  Dark Cloud's cast of six playable characters (three melee fighters, three long-ranged) has now been pared down to just two, though they are much more versatile to compensate for this.  Max wields a slow but powerful wrench and a fast-firing but relatively weak gun, and can utilize the "Ridepod" (a steampunk mech with limited fuel) to defeat more powerful enemies.  Monica wields a sword, utilizes a magic bracelet which can be charged for extra damage and can transform into monsters, allowing her to avoid some fights or collect rare items by talking to them in dungeons.  A third character can also be recruited to the active party, taken from a large pool of reserve characters recruited from the first town; they bestow support effects like being able to make Premium Chicken that restores a large amount of HP or earning extra upgrade points for particular types of weapons.

Much improvement has been made to the game's weapon upgrading system as well.  The first and most welcome change is that weapons no longer vanish when their durability hits zero, causing you to lose a weapon you've invested countless hours and items into; instead, their attack power is simply reduced to 0 until they are repaired via a weapon powder.  Similarly, the player no longer has to manually swap between different elements on their weapons in order to accommodate different enemy types; the game will automatically apply these on hit.  This effectively eliminates instances of, for example, being unable to damage a fire-based enemy with a fire-element damage; as long as that weapon has a property they are vulnerable to, they will take some damage.

The game's overall feel is much more tight in Dark Cloud 2 as well.  While the original game had somewhat loose, floaty controls, as well as overlong attack animations that frequently left the player vulnerable until they completed, Dark Cloud 2's combat is much more tight and focused, allowing the player to easily block, counter and combo enemies as needed.  The superfluous "thirst" system is absent this time as well, taking a rather annoying management element out of the game.  Some new moves are even added to the player's repertoire, allowing them to pick up rocks (or other enemies) and throw them at foes to deal damage and stun them momentarily, setting them up for a combination attack.  Interestingly, however, the death system is very much the opposite of Dark Cloud 1's - if one character falls, the other can be immediately swapped in with no penalty (unlike the first game, where this required a "Stand-in Powder").  However, if both characters die, the game ends immediately and the player must reload from a previous save.  Thus, while the first Dark Cloud's characters were largely expendable, but their weapons were an invaluable resource, the opposite is largely true here.

Georama has been expanded upon too.  While the overall concept remains the same (having the player rebuild destroyed areas by finding components in the dungeons), there is much more to it here. Each object the player rebuilds costs raw materials (purchased or found in random chests), and some new layers are added to various requests as well, with houses being able to be painted different colors and populated by various NPCs recruited from the first town.  At times, some Georama goals are not even revealed until the player reaches a certain plot scene and returns later on, all but forcing them to exit an area and return to it later in order to reach 100% completion.  However, the rewards from completing each area tend to very much be worth the hassle, so I didn't particularly mind this change.

Of course, there is also much in the way of new content.  One of the most prominent additions is the Invention system, where the player is tasked with taking photographs of various objects in the environment and various enemy animations (referred to as "Scoops") and utilizing combinations of them to invent new items.  While most of these can be found as random treasures (or bought with money), many of the top-tier weapons and items cannot.  Thus, the player is heavily encouraged to, well, explore the environment and photograph virtually every object in it; even mundane things like the moon or medicine bottles can be an important crafting component.  One thing to note, however, is that Scoops exclusive to boss monsters are generally one-time deals; if you miss them, you won't get a rematch with that boss later, so be sure you check your scoops list before every boss and make sure you don't save your game until you've gotten what's being asked of you!

Other less plot-important, but still entertaining, diversions include fishing (both outside and inside of dungeons), Spheda (golf with a twist - one can only sink the ball if it is the opposite color as the cup, and it swaps each time it bounces off a wall) and even a bit of a monster-raising sim in the Fish Race.  As mentioned, these are almost entirely optional, but do allow the player to earn some rare items when they are successfully completed, as well as Medals that can be traded in for new costumes and the like.

In the end, Dark Cloud 2 very much accomplishes its goal, taking the memorable elements of the first game and giving its weaker elements a drastic upgrade, resulting in a lengthy, but polished and satisfying, game experience overall.  While it can be slightly buggy at times and 100% completion is a task I don't recommend undertaking (a large amount of its content is missable and some of its mechanics are not well explained, not to mention speedrunning every single dungeon floor and completing numerous side-tasks on each gets very tedious), it's nevertheless a game I've always enjoyed revisiting. 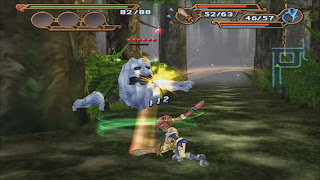 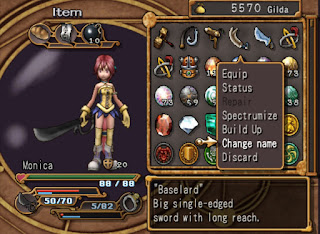