Coming hot on the heels of Square's first mega-hit on the Playstation, Final Fantasy VIII was a stunning visual experience for its era.  But is there a decent game beneath its cutting-edge graphics and cutscenes, or is this just an example of style over substance? 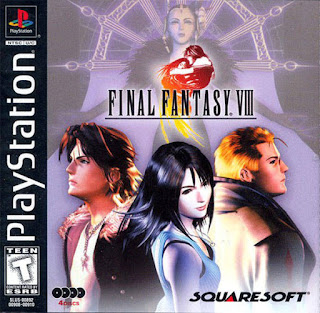 Two years and two days after Square's runaway success with Final Fantasy VII and on the same day the short-lived Sega Dreamcast saw its North American debut, Final Fantasy VIII was released.  While it remains a well-received game and a major success for Square, Final Fantasy VIII was a letdown to many fans of the franchise, and VII in particular.  Whereas that game drew in fans with its complex storyline and characters, polished action-movie-like presentation and interesting mechanics, Final Fantasy VIII tries to bring too many new elements to the series and ultimately collapses under its own weight.

Its setting and premise at first prove promising; rather than being set in a fantasy world with some elements of steampunk or dystopian cyberpunk, Final Fantasy VIII's setting is one more in line with modern Earth - cities and towns are connected by railways and car travel, and its technology overall is comparable to ours, though with some futuristic elements like hover-boards and giant mecha.  Of course, it also retains some of the series' trademark fantasy elements like magical weapons, spellcasting and summoning creatures in battle.  This seems like an interesting idea at first, but sadly, like so many things in the game, is somehow both underutilized and overdone to the point of being farcical.

I think this is best exemplified in the playable characters' weapons.  Some are clearly grounded in fantasy, like Rinoa's wrist-mounted chakrams, Zell's gauntlets and Quistis's whips, while characters like Irvine and Laguna use more modern weapons in the form of firearms and grenades.  All good so far.  But the elephant in the room is the main character's weapon: 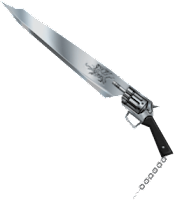 ...A sword with a gun grip, a trigger and six bullet chambers despite having no distinguishable barrel.  It's also said to be among the deadliest of weapons, as well as one of the most difficult to master (which is exemplified in the story, as only he and one other character are seen wielding them).  But one's mind instantly boggles when they attempt to puzzle out how.  It can't possibly fire a projectile nor be comfortable or easy to swing, yet somehow it has by far the highest accuracy of any weapon, and can deal the most damage as well (getting an extra effect with a timed button press to pull the trigger in mid-swing).  In a setting which is allegedly more grounded in reality than prior Final Fantasy titles, it's just a bit too out there to be plausible.

That's just the tip of the iceberg, though.  The characters in the game are downright drab, with all but the main two only having a small handful of prominent scenes before quickly fading into the background (and considering there are only six of them, that is not a good balance of screen time nor character development!).  The story seems heavily confused about its setting and themes as well, seemingly just throwing in new elements on a whim for a bit of cheap visual spectacle.  From a corny zombie body double to the main cast randomly getting visions of a small group of characters with no clear context or purpose to a shaggy dog story about aborting a missile launch, there seems to be little rhyme or reason to how or why anything happens.  But given that abundance of CGI cutscenes in the game that accompany almost every one of these elements, as well as the extremely overdone spell and attack animations in the game that can easily stretch upwards of fifteen seconds apiece, one can easily infer that there wasn't a script-writing process on the game so much as taking a bunch of graphical demos they made and writing contrived scenes to haphazardly bridge them together into a video game script, a la Godfrey Ho.  It only gets sillier as the game goes on, too; I won't say much more for the sake of avoiding spoilers, but ask anyone who's played the game about the big revelation concerning all of the game's main cast and they'll probably have a small novel for you about how ridiculous and out-of-the-blue it was.

Still, while it is easy to pick on the game for valuing its high-budget FMVs and overlong combat animations over any actual cohesiveness in its writing, there are still more to video games than visuals and storylines.  The escalating insanity of the script could perhaps have been forgivable if the gameplay were at least on par with its predecessors; sadly, this isn't really the case either.  While it does carry on the Final Fantasy traditions of having the familiar spells and summons, as well as the Active Time Battle system that became its trademark, almost everything else has been changed for the worse.

In this regard, things primarily come down to how everything in the game is so interconnected and, for lack of a better term, bureaucratic.  Rather than being a fun diversion to give some momentary reprieve from the storyline and the tedium of frequent battles, the minigames are now an integral part of the game's design.  Indeed, a huge element of the game is collecting trading cards through playing Triple Triad with virtually every NPC in the game, then refining those cards into items, which in turn can be refined into new weapons or spells.  Additionally, money is no longer earned through battle with enemies; instead, nearly every choice the player makes has an effect on their "SeeD Ranking", which causes them to get paid a set amount of money every 300 steps or so.  Skills are no longer allocated to characters through their "job class" or even through an intuitive system like Final Fantasy VII's Materia slots, but instead are solely determined by the GFs (Summons) they equip and how many points they grind out through battle for them.  Which proves to be counterintuitive when one considers that having a higher level is actually a detriment in the game - all of the enemies one encounters (including bosses) level up with the player and gain stats at a far higher rate, easily having totals well into the ten-thousands as their level reaches maximum while giving no better rewards for defeating them.  This may be the only RPG I've ever played where fighting monsters and getting stronger is actively discouraged by the game itself.

Pushing the player for leveling is seemingly a poorly-thought-out way to push the game's Junction system, whereby the player can collect up to 100 spells of a given type and attach them to one of their statistics in order to bolster it, with individual statistics getting bonuses depending on the type of spell junctioned to it - attaching a Cure spell to one's HP stat will give a bigger bonus, for example, while attaching high-level attack spells to their Strength stat will boost their damage output dramatically.   Like most things in the game, what stats a character can junction to are determined solely by the GFs they have equipped to them.  However, this system, while interesting in theory, ultimately just compounds the game's heavy emphasis on grinding; one must either draw hundreds of spells from enemies or draw points in totals of 1-6 at a time, or refine items or cards into them in order to get the best benefit possible for a stat, which takes a significant time investment either way.  Once you've spent all that time collecting all of those spells, you probably won't want to cast them for fear of having to do it all again later.

Even the game seemingly acknowledges this as well by making most spells in the game effectively useless.  Even if one were to save some of their spells for a mage character, there's really no benefit in doing so - characters are free to summon any GF they have equipped at any time through the use of a simple command, and as each GF has their own separate HP total that takes damage in place of the character when they are being summoned, the player effectively get a free pass to summon them as many times as they wish while keeping their characters safe from harm.  Effectively, the early game simply boils down to spamming summons and watching the same overlong animations again and again and again (and, with a certain skill, mashing the X button during said animations to get extra damage).

Once the game gets going, the player gets firmly established in the Junction system and enemies start getting tougher, however, only one real factor changes.  That being that instead of being able to spam summons constantly, one is instead encouraged to spam limit breaks constantly.  The limit break system, rather than being random (as in Final Fantasy VI) or based on a gauge that fills as the player takes damage (as in Final Fantasy VII) now simply has a chance to activate at any time, with the odds growing higher as the character's HP falls lower and lower below maximum.  However, one can easily lower a character's HP to under 10%, then press the Triangle button repeatedly to "pass" a character's turn to the next until the prompt to select a Limit comes up, effectively letting them use these attacks any time they want.  This even works with a single character on a full gauge, as they can simply "pass" their turn to themselves repeatedly until they get the option to use a limit.  And considering that characters like Squall, Zell and Irvine have limits that can deliver dozens of hits for damage in the high quadruple digits apiece and enemies very rarely have more than a few thousand HP if you've been diligent about keeping your level low... well, suffice to say that the game just isn't much of a challenge at all and has no real strategy to it.

In the end, Final Fantasy VIII is a game that has a lot of ideas, but seemingly no direction for what to do with any of them.  Its gameplay tries to be fresh and unique, but mostly just ends up being slow, unbalanced and tedious.  It attempts to introduce a new style of setting for the series, but makes no attempt to make that setting credible or believable, instead simply shoving pretty visuals at the player and hoping they won't notice how anything fails to make logical sense.  Its characters aren't memorable or interesting. rarely ascending beyond generic JRPG tropes, and their dialog is forgettable at best and cringe-worthy at worst.  In short, it's a mess of a game with few redeeming qualities that completely loses sight of what made the series a hit in the first place hidden behind a veneer of pretty FMV sequences and CGI backdrops.  Had the developers spent more time reconciling its disparate plot elements to give it a more consistent tone, making its mechanics more focused on gameplay pacing rather than grinding and rote repetition, giving its characters much more screen time and development and maybe cutting the combat animations down to about half of their current runtime, I might be tempted to give it a pass as a quirky, off-beat game in the vein of SaGa Frontier.  As it stands, though, the eighth Final Fantasy is one I can do without. 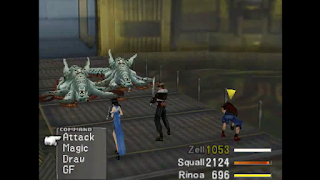 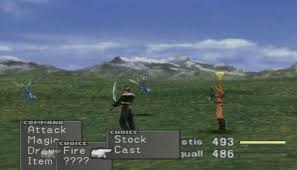