Nippon Ichi made their name with their strategy RPGs, which combined a quirky sense of humor with surprisingly deep mechanics and game design that appeals to die-hard enthusiasts and casual gamers alike.  But does Phantom Brave retain the same charm despite its remixed gameplay and heavier tone, or is this one spinoff game that is better off forgotten? 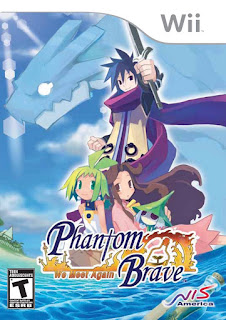 Nippon Ichi has been a well-known company in Japan for a while, making their name with the Disney-inspired Marl Kingdom franchise (known for its song numbers), which later resulted in a spinoff title called "La Pucelle Tactics" that combined a turn-based strategy RPG with puzzle elements - not only did the player need to clear the board of enemies, but they could utilize energy streams on each board to power up their own units, or purify said streams to deal heavy damage to enemies within their range of influence.  Closing one portal could even create chain reactions, closing other portals one after another, that could quickly clear the board.  Disgaea continued this puzzle-oriented trend with its similar Geo Panels mechanic, but also added in a heavy degree of character customization - characters could now freely equip any equipment they wished, and each piece of equipment could be personalized with "specialists" that could grant a variety of bonuses - higher statistics, a greater critical rate, or even extra experience earned from each kill.  This, combined with a maximum level of 9999, randomly-generated bonus dungeons and the ability for the player to influence the overall power of every enemy encountered in the game, allowed for those so inclined to make an extremely powerful party of characters, even to the point where a sufficiently powerful team could kill the game's ultimate hidden boss in a single round.

With the success of Disgaea in both Japanese and foreign markets, Nippon Ichi found their niche, delivering a unique style of game that could appeal to both die-hard stat grinders and more casual fans who were interested in their games' storylines and quirky characters (which was certainly aided by some high-quality voiceover that made the humor all the more enjoyable).  They made several attempts to put variations on this format as well, with Makai Kingdom introducing vehicles and buildings to the mix while Soul Nomad had the player grouping their characters together in small "rooms" and having them attack as a unified unit, Ogre Battle style.

Phantom Brave is arguably their most controversial take on the formula, however.  While it retains the general idea of being able to customize one's weapons and characters and the puzzle-based element of many battles, the manner in which it was implemented was almost entirely changed.  Character skills are now almost entirely free-form, being added to a character's repertoire through fusion (effectively losing one character or weapon to add skills/stats to another) and the equipment system is significantly more limited.  There is no longer any type of armor in the game, and equipment for each character is limited to a single weapon.  However, this "weapon" can be literally any object they find on the battlefield or purchase through a shop, so anything from daggers to axes to cacti to minecarts to bones, and even other characters (alive or dead) can be picked up and wielded.  Moreover, each of these items has their own set of statistics and skills attached to it, with each skill having its own set of properties in itself - some inflict status effects, some cause the character to drop the weapon on the field after using it, some lower an enemy's stats, and so forth.

Other central elements of the gameplay have also been heavily changed up.  One prominent example is that the game no longer operates on a grid-based movement system - instead, every unit on the field now has free-form movement within a set radius each turn, with their attacks all affecting either a single target or a varying range (usually in a round or conic shape).  Terrain can be slippery or bouncy, which can help the player at times (letting them move in small bursts to slide across the map) or hinder them at others (such as causing them to bounce into a hazardous area or even off the map entirely).  Also unlike Disgaea, where the player's characters were deployed from a single base panel, Phantom Brave starts each map with only one character on the board (Marona), who must in turn summon her other units by "confining" them to objects on the field.  Depending on what a particular unit is confined to, they will get various bonuses and penalties - confining to a rock, for example, will give higher defense but a drastic penalty to speed, while confining to a tree will give greater intelligence but lower attack power.  Moreover, each unit can only stay confined to the field for a set number of turns, which varies heavily by unit type (but as a general rule, stronger units tend to get fewer turns).  One can only summon a fixed number of units per battle, with any equipped weapons they have counting toward this total as well.  Thus, a significant part of the game's strategy is knowing how to utilize the field to one's best advantage and making the best use of the limited number of turns any given unit has.

Disgaea's Geo Panel mechanics also return here, though in a slightly different form.  Objects on the field can "broadcast" bonuses to enemies or other objects, which the player can take advantage of  by confining Phantoms to that object - confining a Phantom to an object receiving an "Attack +30%" bonus, for example, will give that phantom the bonus instead.  However, the object broadcasting this bonus does not receive this benefit, so confining to it will give nothing.  Similarly, many maps have the enemies at a significant advantage at the start, receiving major bonuses from objects about the arena, so the player will want to destroy the objects giving enemies these bonuses before they begin their attack in earnest.

Another new mechanic comes in the form of "ring outs", in which units and objects can be thrown or knocked out of the field entirely and removed from the battle.  Some enemies are particularly jerkish about this, deliberately trying to knock your units out of bounds or simply picking up and throwing objects off the map so that you can't use them.  The player can knock or throw enemies out of bounds as well; however, this is not as beneficial as you may think, as any remaining enemies on the field will gain extra levels to compensate for the loss of that unit.  It is not an easy way to clear a given board, either, as the last enemy standing on the field cannot be thrown out of bounds, nor can Marona.  Still, used well, this mechanic can easily turn the tide of a fight for either side.

One of Phantom Brave's major shortcomings, however, is in its game balance.  While unbalanced mechanics are to be expected to a degree in a franchise where levels, stats and damage totals can easily reach into the hundreds of thousands or even millions (and the player is actively encouraged to find ways to quickly gain stats/levels), Phantom Brave proves to be a somewhat unwieldy experience even in a casual mindset.  As the battle system's flow is not broken into distinct player/enemy turn waves, those with a high Speed stat have the advantage, gaining turns much more frequently than those with a lower stat.  This effectively makes many of the slower classes useless, as in high level settings they will almost never get a turn before the enemy kills them.  Some of the bonuses and penalties granted by confined and equipped weapons can be extreme as well, with one of the more prominent examples being the bone weapons (which grant an HP penalty when equipped); on higher-level maps, equipping a bone can leave a character with as little as 1 HP, making them an extremely easy target.  Field bonus broadcasts are equally extreme at times as well, with occasional sights like "Attack +250%" or "Defense+180%" being seen on some randomized maps.  In short, battles can quickly go from trivially easy to unwinnable at the drop of a hat and you never know what the next floor will bring in a randomly-generated dungeon.  Phantom Brave's enemy AI is somewhat inconsistent as well, with enemies occasionally seen passing turns uselessly or hitting their own units in some fights, but being ruthlessly aggressive in others and quickly decimating your party.

Another changeup that wasn't liked among many Disgaea fans was Phantom Brave's overall tone.  Rather than being largely jokey and having over-the-top characters to match, Phantom Brave's story has a much more somber tone. telling the story of a girl ostracized from society for her unique abilities and trying to make a living as a bounty hunter in the face of cruelty, eventually discovering friendship and earning acceptance.  While it does have some elements of humor in it, the overall tone is much more down-to-earth and showcases humanity's cruelty, which is certainly no bad thing, but is a stark contrast to the light-hearted feel of most Disgaea titles (and spinoffs).

While it may not be the most polished game, nor the most beloved of Nippon Ichi's strategy titles, Phantom Brave is a unique and interesting experience.  Its gameplay is almost entirely free-form, which allows the player a tremendous amount of customization and strategy, and its storyline, while somewhat darker than the company's norm, is nevertheless a great one to experience.  Those who enjoy unconventional RPG design should definitely give this one a try.

Developer: Nippon Ichi Software
Publisher: Nippon Ichi Software
Platform: Playstation 2, Wii, PSP, PC
Released: 2004, 2009, 2011, 2016
Recommended version: While the original Playstation 2 version has some unique merits (with Walnut and Raphael's voiceovers being redone by different actors in all subsequent ports due to licensing issues*), the Wii version adds some new content in the form of new story battles and playable characters while also improving the interface.  The PSP version adds more new characters but has a substantially lower/more inconsistent framerate, while the PC version retains all of the content of the PSP version while allowing for a mouse-driven control interface, constant 60 FPS and higher graphical resolutions.  So, short version: PC.

*For those curious, Walnut and Raphael are voiced by Steven Blum and Crispin Freeman respectively in the PS2 version.  In all other versions, they are replaced by Vic Mignogna and Patrick Seitz.