The original Breath of Fire was a modest, if not outstanding, success for Capcom and Square, so a sequel was inevitable.  But does Capcom's second outing manage to recapture the unique charm of the first, or does it just prove to be an inferior followup? 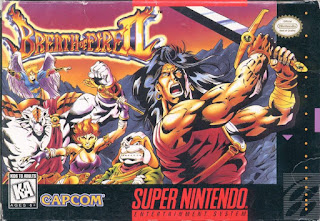 Released two years after the first Breath of Fire, the second game in the series is also among its most popular, with a cult following that continues to this day.  It's not too difficult to see why, either, even just looking at it from an aesthetic viewpoint; the visuals in the game are much improved, with larger, well-defined character sprites and each character and enemy having their own plethora of unique animations.  The music in the game is up to Capcom's high standards as well, delivering energetic rock tracks for the battles and some grandiose orchestral tunes for the maps and towns, managing to convey a sense of wonder that fits the fantasy setting very well.

Attempts have also been made to balance out the cast of characters; each character now has their own unique battle command (seemingly taking a cue from Final Fantasy 6), and rather than giving a few characters some drastically overpowered abilities that unbalance the rest of the game, skills now have a bit more restraint to them.  Ryu's dragon abilities, for example, are no longer form changes that last for the remainder of a fight (or until one manually reverts), but now single-use attacks that take all of his Magic Points and deal damage based on the total in reserve.  Bow's Shot skill will either do a single point of damage or a critical hit, while Nina's special ability restores some of her MP (with great effect being achieved the more turns have passed since the last use).  While some of these abilities are still clearly more useful than others (with Sten's "play dead" ability being nearly useless and Katt's Taunt ability being a poor choice due to her low defense), it was at least a nice attempt to round out the cast a bit more.

The spell system in Breath of Fire 2 still leaves much to be desired, however.  While it hits the usual JRPG bases of having healing, buffing and elemental damage that some enemies resist and others are weak to, they all share a common downfall.  Namely that nearly all of them have a set effect, with the only real variance coming in resistances and weaknesses adding or subtracting a fixed amount from elemental spells.  This means that your lower-level spells will gradually become useless as the game goes on, while the top-level spells will eat up tons of your MP, requiring much grinding to stock up on MP-restoring items to be able to remain a threat in later fights.  I actually found the most useful offensive spell in the game to be Chop, as it does equal damage to any enemy and costs 0 MP, making it far more versatile (and useful) than most any other attack spell.

Fusions make a return as well, though again, attempts have been made to balance them out compared to the first game's.  Rather than combining characters together into one uber-character, the player is now given the option to fuse their characters with six "Shaman" characters representing the six elements.  The effects vary from character to character, but the ones a character is compatible with will generally bolster their stats and alter their color scheme slightly.  Particularly effective combinations have a more drastic effect, giving that character an entirely new form and even sometimes new battle abilities; Bow, for example, can transform into a robot-like form whose Shot special will either deal 1 damage or 999 damage (though it does not work against bosses).  There is a catch, however - if a character is rendered unconscious or even reduced to critical HP, they will lose their fused form and have to return to the home base in order to activate it again.  Thus, the late game becomes a matter of not only grinding enough to survive the gauntlets of strong enemies, but also a trial of keeping the entire party's HP high so that they do not lose their powered-up forms.

Speaking of grinding, that encompasses another disappointing element of Breath of Fire II compared to its predecessor.  The game, particularly in its late stages, requires quite a lot of it; enemies give relatively little experience and money and the power difference between dungeons can be drastic, reducing large spans of the game's run time to tedious, slow-paced leveling.  A disappointing turn in an era when games were largely beginning to move away from that aspect of their design.  Especially when one considers that this game came out the same year as Chrono Trigger, a game noted for its minimal grinding and overall fast pace despite its genre's pedigree.  Even the first game kept grinding to a relative minimum outside of the early stages, with repetitive battles even late in the game being largely skippable through use of its Mrbl3 items, so it's a step back for its own series as well.

The translation has seen a significant downgrade from its predecessor as well.  Breath of Fire 2 saw no involvement from Square; instead, Capcom themselves took on the duty, and this is very evident in the final product.  The translation's quality is notoriously lacking, from relatively minor details (such as being prompted to equip a fishing lod) to character dialog with no real flow or logic to making the story almost indecipherable in its later stages, Breath of Fire II's localization job leaves much to be desired.  It's probably the worst I've seen in an RPG from a big-name company, and that's saying a lot!

With so much of the game being trapped in the restrictions of its predecessor, and so many others actually being a step back in terms of design, one must then question why this game is so beloved in comparison to the original Breath of Fire.  Well, I think I have an idea: Breath of Fire II is one of the earliest examples of an RPG built heavily around anti-religious themes, which probably accounts for a lot of the popularity it enjoyed (and still enjoys today).  After all, if it offends your parents, it must be cool, right?  Neon Genesis Evangelion came out around the same time and got mistaken for being "edgy" and "anti-religion" even as its creators openly admitted that they had no political message in mind and only chose to use Christian iconography for how nifty it looked (Source), but it still proved to be a massive success for Gainax, so naturally everyone chose to follow the trend.  From Final Fantasy VII and X to Xenogears to Deus Ex to the Matrix, the mid-90s to early 2000s were saturated with video games, movies, books and comics which subverted Abrahamic images and themes to push the illusion of depth and attract the angsty teen demographic, all of those teens seemingly unaware (or just not caring) that by supporting it, they are giving the overwhelming majority of their money to the rich conservatives who ran the giant mega-corporations that produced and sold those works.

That's my theory, at least;  edgy gamers trying to be "rebellious" whilst never realizing the irony in the act of buying symbols of their rebellion from a multi-million dollar company.  Not to say that Breath of Fire II is a bad game using said icons as a crutch - it certainly carries an interesting storyline with some well-realized dark themes (when you can puzzle it out through the bad translation), has the same great imagination to its setting and characters as its predecessor, and of course has some killer visuals and music that live up to Capcom's lofty standards.  However, its overall design and presentation is lacking on several fronts, and in fact feels like a substantial downgrade in many ways from the first.  II may be the more beloved game and the one history remembers better, but to me, the first Breath of Fire was a superior experience overall. 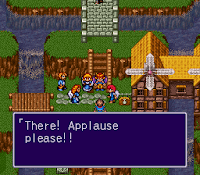 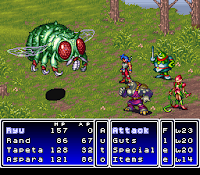 Developer: Capcom
Publisher: Capcom
Platform: Super Nintendo, Game Boy Advance, Wii Virtual Console, Wii U Virtual Console
Released: 1995, 2002, 2007, 2013
Recommended version: The Game Boy Advance version features somewhat downgraded visuals and music to fit the differing hardware, but it does also substantially reduce the amount of grinding involved by tripling the experience and doubling the money enemies grant.  The player is also afforded the ability to dash, which makes navigating dungeons significantly faster.  So I would probably recommend that version over the SNES or Virtual Console releases (which are ports of the SNES version).