The eighth numbered entry in the Ys franchise follows the example of its predecessors in many ways while also attempting to branch itself out into a more fully-featured RPG experience.  But does this prove to be a breath of fresh air in the era of open-world gaming, or do these changes just dilute the Ys format too much and make it unrecognizable? 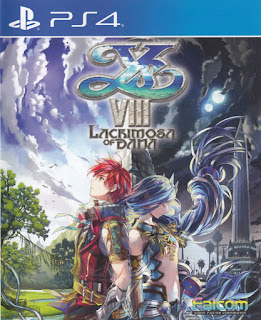 Ys is perhaps the last remaining RPG franchise that has persisted since the 1980s and maintained its popularity without ever massively changing up its format.  While a few attempts have been made to introduce a new style of gameplay for the series (most notably Wanderers from Ys and Ys Strategy), their overall low reception quickly put the series back where it started - a Hydlide-inspired action RPG that combined elements of puzzle solving with real-time combat somewhat reminiscent of an overhead shooter, requiring the player to dodge waves of enemy projectiles and sneak their own in whenever a small opening presented itself.

Ys Seven was perhaps the first successful change-up to the series' design, turning it into a party-based experience and having features like a dedicated dodge button, numerous skills for each character, super moves that could deal heavy damage and multiple weapon types.  These three main types - slashing, piercing and crushing - proved very effective against some enemies and nearly useless against others, requiring the player to frequently change up their party and controlled character to remain an effective fighting force.  Well-timed dodges could even give the player an advantage by filling their special attack gauge and momentarily making all of their attacks into critical hits, though this came with a drawback - a poorly timed dodge will put the player at a severe disadvantage, making all enemy hits against them deal extra damage for a short time.

Ys VIII's gameplay follows up in much the same format, though with some slight changes.  Well-timed dodges now activate a Bayonetta-esque mechanic by bolstering the player's speed momentarily and substantially filling their skill gauge, letting them unleash some extra damage in the brief respite it provides.  There is also a new mechanic known as a "Flash Guard", activated by pressing the skill button just before an enemy attack connects.  Doing so makes the player momentarily immune to damage and turn all of their attacks into critical hits; however, missing the cue will leave the player vulnerable to attack.  Basically, the player now has the choice of a lower-risk dodge or a higher-risk block, both of which have slightly different timing and different benefits; used well, either can turn a bad situation in a player's favor, though the Guard is obviously more impressive and rewarding when one's skill improves to the point of being able to use it consistently.

This also marks the first entry in the Ys franchise to be presented in HD, utilizing the format to deliver some breathtaking natural environments and gigantic monsters that easily make it the most beautiful game in the series.  Other aspects of the game's presentation have seen much improvement as well, with fully-rendered 3D character models, full voiceover during story scenes and quite a bit of party banter both in and out of combat.  While the limits of its budget are still apparent at times (with only minimal facial animation and character movement in most cutscenes), this is still easily the most impressive Ys title from an aesthetic viewpoint.

The core aspect of Ys remain constant as well.  The game unfolds in a somewhat linear format, though there is a large amount of side-exploration as well, with many areas requiring the player to find certain items to bypass obstacles, or rescue a certain number of villagers before gaining access to a new area.  Prohibitively powerful enemies may also inhabit some areas, requiring the player to either run past them or avoid them until they are powerful enough to defeat them and explore that area unhindered.

With much of the game's action taking place on a deserted island, the format of the game is somewhat changed up; rather than simply being able to return to town to buy upgrades via gold, the player must now scavenge resources to pay for numerous upgrades to both their equipment and their base's facilities.  Thankfully, steps have been taken to minimize the annoying grind factor that typically accompanies these sorts of design decisions; one prominent example is that the player can trade lesser resources for greater ones at a trading post in town, which comes in handy should they be a few Iron Ore pieces short for a weapon/armor upgrade, for example.  These do tend to be fairly costly; however, the player will likely have hundreds of near-useless resources laying around after a bit of diligent exploration, so the overall cost to them will likely be minimal.  Additionally, one does eventually unlock accessories that allow for rarer drops to occur more frequently and the lack of a certain resources is usually solved by continuing to explore the island to discover new enemy types and resource points to find, so the solution to finding anything one is lacking is more often than not to advance through the game, rather than sticking around somewhere and grinding.

Other minigames are incorporated into the experience as well, from a relatively simple fishing minigame to earn some extra cooking ingredients or resources to a base defense minigame, tasking the player with defending their settlement with waves of monsters.  The latter mostly boils down to more combat, though it also affords the player the ability to build defensive emplacements to aid them and grants bonus points for things like finishing enemy waves with a super move or without taking any damage, allowing them to tally up a greater final score and earn bonus items if their rank is high enough, making it an enjoyable occasional diversion from the main story.


In short, Ys VIII, while retaining the familiar linear design and fast-paced feel of the series, manages to successfully integrate elements of modern RPGs as well, working in a crafting system and several minigames while never letting it affect the overall brisk pace of the game.  The series' trademark writing quality and music shines through once again as well, giving the player a feeling of embarking on a grand adventure with a group of colorful characters, and the storyline, told in a somewhat unconventional fashion, subtly keeps the player motivated to see what will happen next in both present times in and in a concurrent storyline that unfolded in the far past.  Lacrimosa of Dana is proof that directed and concise design is still an essential element of the JRPG genre, and that that isn't likely to change anytime soon.

Developer: Nihon Falcom
Publisher: Nippon Ichi Software
Platform: Playstation 4, Playstation Vita, PC
Released: 2017
Recommended version:  All versions seem to be largely identical in design and content, though the Playstation 4 version has the obvious advantage of more powerful hardware, resulting in a more consistent framerate and faster loading times.  The Playstation 4 version also has some extra content that the Vita version lacks; there are more quests to complete and some new abilities to unlock.  The PC version, from various reports, has numerous bugs and slowdown issues and should be avoided until patched.  The Nintendo Switch port is more or less a definitive release, containing all the downloadable content of previous releases and having no technical issues as far as I can tell.