A small-budget indie RPG made in Gamemaker Studio that draws much inspiration from Earthbound and even has some CRPG-like elements to its design. But does Undertale provide a memorable experience on par with the game that inspired it, or does it just fall prey to its engine's limitations? 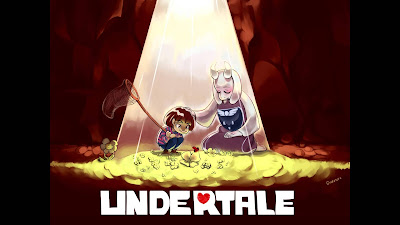 In an era where the term "innovative" gets thrown around to describe any weak gimmick a generic first person shooter uses to distinguish itself from the 347 other FPSes released that year, it probably doesn't immediately draw anyone's eye when Undertale is touted as an innovative game.  That said, Undertale is one of the few games truly worthy of the moniker; while it does follow the JRPG format with its heavy emphasis on character development and the overall style of its combat system, it puts so many twists on both elements that it creates something truly distinct and memorable.

This is probably most prominent at first in the game's combat system.  While at first it appears rather mudane with its basis in random encounters and its turn-based nature, the actual mechanics of it quickly show themselves to be very unique.  The ability to do more damage with well-timed attacks (with the player pressing them as they sweep across the center of a large target) isn't particularly new, but the means by which the player avoids damage certainly is.  Each turn, the player is placed in the center of a "bullet board" and must evade patterns of projectiles for a few seconds; each time the heart representing them touches one, they will take damage.  These projectile patterns for each type of enemy the player encounters, and when encountering two enemies of a different type their bullet patterns will often be combined together, making their attacks more challenging to avoid.  Other elements are gradually introduced as well, such as green projectiles that will actually heal the player, blue projectiles that the player can only avoid by keeping their heart icon still, or orange projectiles that require them to be moving in order to avoid damage.

This element gets played up in various creative ways throughout the game, most especially in the boss battles; not only do these frequently force you to contend with fast-moving waves of bullets (oftentimes reminiscent of a bullet hell shooter), but they work in other gimmicks as well; the battle with Undyne, for example, locks your icon in place and forces you to "block" incoming attacks by placing a shield between yourself and them.  These are inevitably easy to pick up at first, but the game quickly ramps up efforts to keep the player on their toes; while it is easy enough to block a series of incoming attacks from four directions, Undyne will quickly start firing "backwards" projectiles at you as well, forcing you to quickly switch to the other side in order to successfully avoid damage.  The patterns also progressively get faster as the battle goes on, with projectiles and backwards ones being intermixed together, requiring some truly honed reflexes and memorization to succeed.  Numerous gameplay change-ups occur throughout the other boss battles as well, and I'd be doing a disservice to list them all, as they give each of the fights a very distinct challenge and feel.

Another unique element for the game, and especially for Japanese-styled RPGs, is the fact that the player can effectively be a pacifist throughout the adventure and not kill a single monster or person they encounter.  This extends even to the game's minor enemies, who can all be "spared" through various dialog interactions.  One example is Aaron the seahorse; the player defeats by flexing, eventually causing him to "flex himself out of the room" and fly offscreen, effectively leaving the fight.  The process of sparing varies heavily for each enemy one encounters, but all of them (even bosses) can be defeated non-lethally by puzzling out a selection of dialog choices, or simply lasting long enough in the fight.  During the Undyne fight, for example, the player cannot run away while their heart icon is purple, so they must avoid attacks until Undyne releases them from that status, at which point they can flee from the fight.

Fitting the general quirkiness of the game's design, Undertale is replete with a very colorful cast of characters.  Fitting the Earthbound inspiration, they each manage to be very over-the-top and silly while also retaining a surprising sincerity and charm to them.  From the pun-cracking skeletons Papyrus and Sans (who each talk in their respective typefaces) to spiders that run a bake sale to dogs wearing huge suits of armor (somehow...) to murderous flowers, Undertale's world is a wild one that is a joy to experience throughout.  Also similarly to Earthbound, the game retains an overall simple visual style seemingly inspired by newspaper comic strips but still puts it to great use, utilizing the minimal color palette and a sense of depth to deliver some very distinct and eye-catching visuals throughout.  The soundtrack draws much from its inspiration as well, delivering a plethora of simple, yet distinct and memorable songs for each location as well as some amazing battle tracks that perfectly complement the crazier fights (my personal favorite being Muffet's).

Undertale takes another unique step by offering a true sense of freedom and consequence that few other RPGs do; even big-budget games that claim to offer such choice these days rarely do, usually not even garnering an alternate line of dialog from NPCs in most circumstances.  However, Undertale most definitely succeeds at this experience; the game tracks all of your actions throughout the game, giving you some very different dialog in some scenes.  Similarly, characters will react differently to you depending on dialog choices you've made and whether you've spared or killed past bosses, which can result in some fights and scenes you wouldn't normally see if you'd made the other choice.  Ultimately, this tailors the experience quite differently to the player's game style and giving them one of three distinct endings (with a few different variations of each).  Choices the player has made in previous playthroughs will even carry over into new ones, resulting in some different scenes and lines of throughout and giving an otherwise short game some significant replay value.

In an era of cookie-cutter JRPG games that prey on nostalgia and "choice-driven" RPGs that mostly just boil down to which character you're going to romance in a particularly cringe-worthy manner or what color the screen will be tinted during the one ending cutscene, Undertale providing a gaming experience that beats out both camps' defining features.  While still recognizable as a Japanese-styled RPG, it provides enough of a twist on the format that it remains a fresh and engaging experience throughout, roping the player in with the sincerity of its characters and an overall positive mood, and it never falls into the trap of forcing the player into tedious grinding to pad out game time.  Big-budget "choice-driven" games are equally beaten at their own gimmick by giving the player the freedom to explore this world as they see fit, with their choices having a genuine change on the story they see unfold and even allowing them to drastically alter the fate of the world they find themselves in.  Hell, it even effectively lampoons the awful, stilted romances of other games with some ridiculous "dating scenes" of its own, turning that entire lousy trope on its head and providing plenty of laughs to boot.  A game that perfectly balances the "video gamey" element of its design with its strong storytelling, Undertale is a standout title and, I dare say, one of the finest games in the genre. 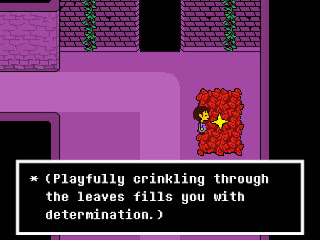 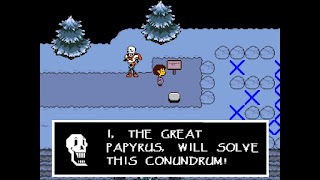 Developer: Toby Fox, 8-4 Ltd (PS4/Vita ports)
Publisher: Toby Fox, 8-4 Ltd (PS4/Vita ports)
Platform: PC, Linux, Playstation 4, Playstation Vita
Released: 2015, 2017
Recommended version:   The PS4 and Vita ports have a slight bit of added content in the "Dog Shrine", an optional area that just provides a few extra jokes as well as the majority of the game's trophies.  Otherwise, all versions of the game are pretty much identical.