The first game to offer an MMORPG-like experience on a home console, built by the ever-ambitious but headstrong Sega and released on the system most emblematic of that philosophy, the Dreamcast.  But does this game still deliver some dungeon-crawling fun, or is this one product of its time that should be remembered only as exactly that? 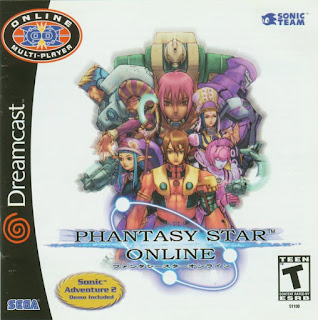 (This review will primarily address the original Dreamcast release, as that is the one I'm most familiar with.  Later versions added in extra classes, missions and various gameplay tweaks)

Sega's Dreamcast brought a lot of firsts to the table, but its most prominent feature was that it was the first home console to feature online play in an official capacity; for the first time, players could log onto servers set up by a major game company and play their games with other players across the world.  By allowing players to experience titles simple arcade action-puzzlers (Chu-Chu Rocket) to games like Quake 3 Arena on a more affordable platform, the Dreamcast was instrumental in bridging the gap between PC and console gaming.

Naturally, the next step in this process was to deliver an MMORPG-like experience on the system, and for that, Sega turned to their most well-known RPG franchise, Phantasy Star.  While largely unconnected to the classic Phantasy Star series on the Master System and Genesis, Online nevertheless carried on its science fantasy theme and general aesthetic style, changing up the gameplay to be more action-oriented and allowing up to four players to party together and fight their way through the game's dungeons and quests.  Better still, characters could be carried over between online and offline play, allowing the player to still level up their characters and gain resources offline when the servers or their friends were unavailable.

Like many early MMORPGs, however, the underlying experience was a bit lacking outside of the appeal of playing with friends online.  PSO's gameplay is rather simple overall, basically being a simplistic hack-and-slash with some RPG elements on top.  Melee attacks are especially emblematic of this, mostly consisting of simple combinations comprised of weak and strong attacks that can hit up to three times in a row with timed button presses (though irritatingly, most weapons can only hit the enemy you've locked on to; the others for all intents and purposes are ignored).  Gun weapons operate on a similar principle, but hit at range, while spells can be used as healing, defensive boosts or single large-scale attacks that deal damage to groups of enemies at at a time.  Of course, they also require plenty of magic-restoring items to make them a viable build.  Enemy AI isn't much for strategy either, generally just slowly advancing toward the players and launching attacks whenever they're in range.  Bosses are slightly more complex, but still rather one-note and predictable, making the overall gameplay rather generic.

Character customization is another major part of these kinds of games, and Phantasy Star Online actually does offer a fair bit in that regard.  There are nine playable classes in the base version (twelve from the Gamecube version on), each of which has several different cosmetic options and skins to utilize, and the player is given one of ten "section IDs" depending upon their name input, which in turn affect what rare item drops they are eligible to receive from certain enemies.  While these characters still fall into one of three relatively flat archetypes (fighter, ranger and mage-type characters), there are some minor variations between them; the RAcaseal (android) variation of the Ranger, for example, cannot use any spells, but can see traps without the use of items and generally has higher HP and defense (and can use traps himself in later versions), while the HUnewearls have generally lower stats than other fighter types, but are the most versatile as they can cast almost any spell and use a wide range of weapons (including a few no other class can).

One can also tweak their gameplay style slightly through the use of a particular piece of equipment.  Each player begins the game with a "Mag", a creature which can be fed items in order to power them up, which in turn boosts the player's stats and gives them the ability to occasionally release a special ability with a variety of effects; generally either dealing significant damage to all enemies in the area or temporarily boosting one's entire party.  A few hidden variants on Mags also exist in the game, generally resembling other Sega characters (such as Opa-Opa or Doctor Robotnik).

With such simple gameplay, the player's primary motivation in the game isn't necessarily to just win it, as there really isn't a lot to the main quest; it primarily consists of four large, semi-randomized dungeons and a few optional side-quests along the way (with more available as free downloads, though most were only available if the system's language was set to Japanese).  Much like Diablo II and similar games, much of the game's higher-level experience consists of farming specific enemy types and bosses in search of stronger equipment in order to make one's character build as powerful as possible.  And since some item drops only appear at very specific times of day, or require certain rare enemies to spawn, and even then have odds of one in several thousand to actually appear, one can imagine how tedious and frustrating this can get to be after a while.  Moreso because the game doesn't have any kind of sophisticated trading system in place, instead relying on the players simply dropping items at one another's feet and hoping they don't get shafted in the process.  Thankfully, this was fixed in later versions too.

Of course, one also cannot speak about Phantasy Star Online without also mentioning what a nightmare it was to play online.  In its heyday, the PSO servers were absolutely rife with hackers and exploiters; through Gamesharks and save editors, weapons were hacked to have absurdly high stats, "player killers" ran rampant by abusing a glitch that caused their healing spell to do negative amounts of healing (effectively damaging everyone in its range enough for an immediate kill) and, most deviously, character files were hacked to have 0 HP or be completely overwritten with those of a weak NPC named "NOL", effectively taking characters that took hundreds of hours to build up and wiping them out in an instant, or making them completely inaccessible.  Worse, Sega made no attempt to rein this in whatsoever, only banning the systems of people who were guilty of lesser crimes like giving themselves banned weapons (Egg Blasters and Snow Queens) and letting the rest run rampant.  Well, unless you bought "Version 2", of course... which also had a $10 a month subscription fee.  Basically, unless you played exclusively with close friends, PSO's online functionality was a minefield; not a good prospect for the long-term enjoyment of any online game.  Only being able to save one character per VMU felt just a touch scammy as well.

At the end of the day, Phantasy Star Online is what it is - the first MMORPG on a major home console, and an interesting piece of history as a result.  However, its simplistic, grind-heavy gameplay and nearly twenty years of improvement since its release have effectively quashed its long-term appeal.  Genre fans may wish to give it a brief look for its historical value, but those looking for a massive multiplayer online experience have many better options today, whether they prefer a cooperative, competitive or storyline-oriented experience. 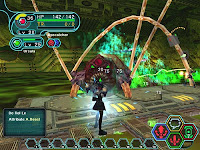 Developer: Sonic Team
Publisher: Sega
Platform: Dreamcast, Gamecube, Xbox, PC
Released:  2001, 2002, 2003, 2005
Recommended version:  Blue Burst (PC) is the definitive release, adding in a new episode as well as improved visuals and controls over the others, and it can even still be played online through third-party servers.  Otherwise, your best bet may be the second Gamecube version ("Episodes 1 and 2 Plus"), which features four player local co-op in splitscreen mode, several quests that were online-only in the original release, and a handful of bug fixes.  Avoid the Xbox version, as it requires an Xbox Live account to play even in offline mode (and as the online services for the original Xbox are long discontinued, it makes this version effectively unplayable).
Labels: ⭐⭐½, 2000, Full Reviews
Newer Post Older Post Home