Double Fine branches away from the two genres its big names are best known for - point-and-click adventures and quirky action games - to craft a turn based RPG experience with a heavy emphasis on collectibles.  But does Costume Quest deliver the goods, or is this just another forgettable outing for the genre? 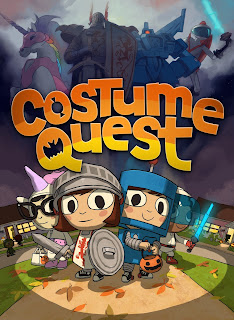 Double Fine's first foray into the RPG genre didn't draw too many eyes at first, seeming to deviate from their usual style of writing and design to deliver something a lot more "kiddified" and simple, which was seen as a disappointment given the fact that this was a company known for genre-defying titles like Brutal Legend and Psychonauts, which combined innovative gameplay with a unique, quirky sense of humor that lent them a lot of charm in spite of their technical shortcomings.

Those who actually played Costume Quest, however, found a game of considerable worth.  While the game does obviously draw inspiration from 16-bit RPGs in its overall design, it does not fall into the trap that so many "homage" titles do by limiting itself to that era's design sensibilities and refusing to distinguish itself in any way.

Case in point, the game's primary inspiration is evident right off the bat.  Your character is tasked with collecting parts of various costumes which, when fully assembled, often grant them the ability to reach new areas through the use of map abilities, slightly reminiscent of games like Zelda or Metroid.  For example, the spaceman costume has a glowing sword that can light up dark areas and allow you to pass through, while the knight costume has a shield that allows the player to move through hazardous areas they normally couldn't.

In combat, however, these costumes serve a very different role, with the playable characters transforming into their costumed counterparts (with an anime-styled transformation scene, no less) and being granted different stats and special abilities depending on the costume they have equipped.  The robot costume, for example, has a strong physical attack and a special move that hits all enemies in play, while the Statue of Liberty costume has an ability that heals the entire party for a moderate amount.  The player can also collect and equip "stamps" that grant extra abilities or stat boosts, such as increasing one's attack power, boosting maximum HP or granting abilities that can stun enemies for a turn, making combat in the game somewhat reminiscent of titles like Final Fantasy - fitting the playable characters into distinct archetypes, but also allowing them to customize their party in order to give themselves an edge.

Combat is somewhat more limited in Costume Quest than in most RPGs, however.  There are no items to use to heal the party or damage enemies, nor is there a dedicated "defend" command to reduce damage enemies inflict at the cost of being able to take no action.  These equivalents are instead limited to specific costumes, which makes one's chosen loadout before a fight able to easily make or break one's success in any given battle.  Thankfully, the player can run from any battle they encounter (even bosses) in order to change up their loadout or, in extreme circumstances, gain an extra level or two to defeat a particularly stubborn enemy group.  Of course, mastering the minigame mechanics for each costume to deal extra damage or reduce damage taken (typically timed button presses or rapid button presses/stick movements to fill a bar) and landing preemptive sneak attacks for a bit of extra aid tends to help as well.

Being a downloadable game originally built for the Xbox 360, it was designed with the platform's achievement system in mind.  To that end there are more than a few collect-a-thon quests in the game; some required (like trick-or-treating at all the houses in an area) while others are optional (finding six kids in each zone and completing the apple-bobbing minigame three times).  These add a bit of longevity to the game, as well as granting some bonus experience points and occasionally a new stamp or costume component to collect to expand one's options for combat.  Unlike most games built around achievements, however, Costume Quest's side missions never feel overly padded or annoying and mostly serve to complement the experience rather than dragging it down into the realm of tedious "content for the sake of content", so I never minded doing them.

In the end, Costume Quest is a simple, yet charming and entertaining game that carries a sense of fun throughout.  While it utilizes some elements of 16-bit RPGs in its design (most particularly Mario RPG and Final Fantasy V), it does quite a bit to set itself apart as well, and the end result is a short but engaging title.  It's certainly not going to set the world on fire, but ~$10 gets you a few hours of enjoyable, light-hearted entertainment that's perfect for the Halloween season. 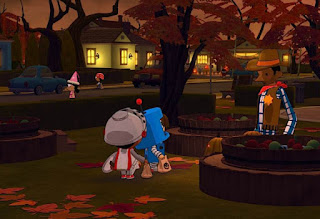 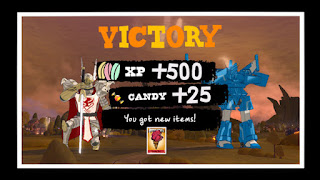 Developer: Double Fine Productions
Publisher: THQ, Double Fine Productions
Platform: PC, Playstation 3, Xbox 360, Mac OS X, Linux, iOS, Android
Released:  2010, 2013, 2015
Recommended version:  All versions seem to be more or less identical, though the mobile ports obviously use a touchscreen interface rather than a keyboard or controller, and the DLC chapter "Grubbins on Ice" is a free inclusion in all but the Playstation 3 and Xbox 360 releases.  Fans of physical releases can track down a DVD copy (released through THQ's Valu-Soft line) that contains the Windows, OS X and Linux versions on a single disc, all DRM-free.