The fourth entry in the Elder Scrolls franchise marks a transition into a more dynamic-feeling game world and a much heavier emphasis on action-oriented gameplay than the flat dice rolls of its predecessors.  But does this change-up work in the franchise's favor, or has it simply lost any charm it held with this new format? 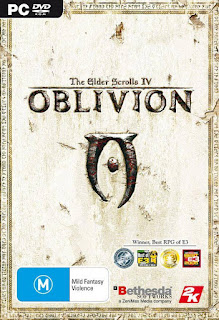 Elder Scrolls, despite being a 3D game experience from its origins, was always at its core a tabletop RPG, with a large emphasis on random dice rolls, statistics and role-playing being integral to enjoyment of the core experience.  Quests could easily be made or broken by a single skill roll and combat was overall rather dry, mostly just consisting of swinging or firing arrows/spells at an enemy and hoping you deplete its HP before it does the same to you.  This was somewhat necessary due to the game's heavily randomized design (with most quests in the game being randomly generated monster extermination/item delivery quests), but in light of the series' jump to a new engine and a smaller, more detailed game world with Morrowind, didn't make a great deal of sense there.  Particularly when one's actions could make key NPCs unwilling to talk to their character and when seemingly innocuous but actually plot-important NPCs could die, rendering the player unable to continue in the main quest.

For lack of a better description, Oblivion is less of a tabletop game and much more of a video game.  While obviously the player's abilities are still reliant on their stats, the overall gameplay now has something of a more common-sense approach.  For example, weapon statistics no longer roll a hit or miss based on your stat - if you see a weapon physically connect with an enemy, it counts as such.  However, boosting your weapon's stat can cause you to do more damage, and when certain milestones are hit, unlock new moves that can pierce an enemy's defenses or otherwise give you an advantage in a fight (such as knocking them down or disarming them).  Armor skills work in similar fashion, with the player unlocking benefits once they hit certain milestones, such as slower degradation or being able to perform defensive dodge maneuvers to evade enemy attacks.  Lockpicking is now governed by a minigame rather than a simple dice roll, though raising one's skill with it can give bonuses like not resetting all of the tumblers when a click is mistimed.  NPC interaction now works on this principle too, with a minigame that allows the player to raise or lower disposition by clicking quarters of a rotating circle with the right timing (or handing out bribes to gain a free boost).  Finally, the days of having to wander aimlessly around the landscape to find one's next goal are largely gone.  Oblivion features a first for the series with the advent of a waypoint system, pointing you to your currently selected objective with a marker on your map and compass.  Fast travel is also more convenient, returning to the Daggerfall-styled system of letting the player pick their destination on a map and quickly travel there at almost any time.  However, this only works for locations they have already visited, so there is still quite a bit of emphasis on exploring the game's world.

Great strides have also been made in making Oblivion's environment feel much more alive and realistic than in previous Elder Scrolls games.  NPCs now freely wander the world, operating by their own schedules and acting in a fairly realistic fashion - visiting pubs, talking in the streets, working at their shops at the day and going home at night, guards changing shifts and leaving brief gaps in their security, and so forth.  This can occasionally be annoying when a quest requires you to track down a particular NPC and speak to them at a specific time or place, but adds much to the immersion factor of the game overall.  The player can also no longer kill plot-essential NPCs (they will simply be "knocked unconscious" instead), so they no longer have to worry about putting the game into an unwinnable state as they pursue goals not relevant to the main quest.

Also helping matters is the fact that every character in the game is now voiced (and quite well at that), though this comes at the tradeoff of having far fewer dialog options than in previous Elder Scrolls games; generally, one can only ask NPCs about a limited range of topics referring to their profession, or the generic coverall choice of "Rumors".  This does lend itself to a lot of repeated dialog as well, with the game quickly achieving some notoriety for its frequent and inane conversations between NPCs.

As with most open-ended RPGs of this time, the game's sidequests are where much of the development's effort took place.  Oblivion is no different, and great strides have been made to make the sidequests much more diverse and interesting than the usual slew of slay-the-monster or deliver-the-item quests that plague most games of this type.  The thieves guild goals are largely open-ended, simply requiring the player to steal and fence a set amount of goods from any NPC they can before another story-driven quest comes up; these tend to be more high-profile, requiring the player to break into noble mansions or even castles to acquire a particular item.  The assassins' guild gets equally creative, with some particularly depraved moments throughout its questline that I won't spoil here (though anyone who has played the game will probably have vivid memories of the infamous party mission).  Even some of the one-off quests are quite fun, such as tracking down the cursed sword Umbra (in the hands of an extremely powerful and dangerous NPC) or just using a map and a few vague clues to seek out hidden treasures can all be quite fun.  The DLC missions are surprisingly good, too - from new strongholds for the the player to liberate, rebuild and decorate to their liking to  quests like Mehrunes' Razor to two fully-featured expansion packs in Knights of the Nine and Shivering Isles that add hours of new content and, in the latter's case, a pretty twisted sense of humor to the proceedings.  Of course, not all of it is golden; the notorious Horse Armor DLC is commonly cited among gamers as a prime example of overpriced and ultimately useless game addons, and is frequently blamed for a trend of them that persists to this day.

The main quest, on the other hand, doesn't feel quite as well-polished.  While it does tell a fun story, it does lend itself to several annoying moments.  Once the player gets a few steps into the main questline, "oblivion gates" begin spawning frequently throughout the countryside, which they can then enter and close by making their way through a series of towers and traps.  However, the lack of variety in these, as well as the frequently repeated enemies and layouts, quickly got me burned out on them; before long I just began ignoring them entirely.  They didn't give enough of a tangible reward to make them worth exploring after a while, and their layouts just ended up being more confusing to navigate than anything.  As many have also attested, the ending to the main questline feels rather rushed and more than a bit like a copout; indeed, developer comments reveal this is actually the case, with a lot more planned for the idea they had that was dropped due to looming deadlines.

Other signs of the game's somewhat rushed development are evident as well - many of the ruins and dungeon interiors one encounters look very similar, with a lot of the exact same wall textures and 3D models present throughout.  More infamously, though, some lines of dialog aren't voiced at all, while others contain outtakes that were accidentally left in the game, which is a bit awkward (and unintentionally funny) when one runs across them.  Character faces and lip-syncing are also rather awkward-looking overall, though this was still before such things were common elements of gaming, so it is forgivable to a degree.  The leveling system in the game leaves something to be desired too; enemies' strength scales up with the player's, which can lead to the game becoming exceptionally difficult if they gain too many levels without taking care to keep their equipment and spells up-to-date to deal with new threats; ironically, one way many players deal with this is to specialize in numerous skills they rarely (if ever) plan to use so that they can more easily control when they, and by extension the enemy - will gain levels and power up.  There are various player mods on the PC version to offset this, though you're kind of out of luck for the console ports.

Oblivion definitely took the Elder Scrolls series in a different direction, for both good and ill; the action it provides is satisfying for a time, as is the bigger focus on immersion with its voiceover, active world and story-driven questlines that rarely fall into the boring "go here get this and return" format.  However, its falls short in other ways - the base storyline is pretty dull, the balance is all over the map (and much easier to exploit than even Morrowind's) and the greatly simplified NPC interactions and still-not-great combat make its gameplay feel pretty monotonous after a while.  One step forward for gameplay, but a significant step back in storytelling, balance and polish factor. 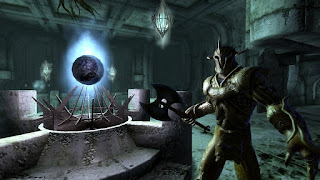 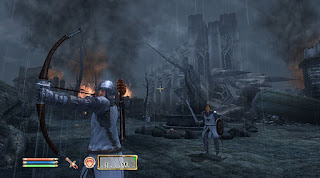 Developer: Bethesda Softworks
Publisher: Bethesda Softworks
Platform: PC, Playstation 3, Xbox 360
Released:  2006, 2007
Recommended version:  As with the other Elder Scrolls titles, I generally prefer the PC versions for their modding capabilities, as well as the ability to get the maximum benefit from the more powerful  hardware the platform generally allows.  Oblivion doesn't have quite as many mods as Morrowind or Skyrim, but the ones it does have - such as a leveling system overhaul, revamped interface, slews of new monsters and a variety of new spells to play with - nevertheless add much to the experience.
Labels: ⭐⭐½, 🎣, 2006, Full Reviews
Newer Post Older Post Home