Fallout 3 is a game that met with much skepticism among long-time Fallout fans, with concerns that its shift in development teams and change to a more action-oriented engine would ruin the magic the first two games conveyed.  But did Bethesda do an admirable job trying to build a new game in the Fallout universe, or is this the archetypal killing blow to the series that so many feared? 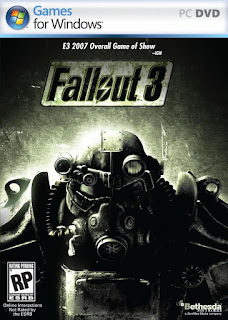 Fallout 3 is certainly an odd case among video game development cycles, beginning its life under Black Isle at Interplay during a time when they were facing severe financial problems.  Eventually Interplay closed down Black Isle and sold off several of their popular IPs in an attempt to avert bankruptcy, with the Fallout license being purchased by Bethesda Softworks.  Rather than use the work already done on Interplay's Fallout 3, however, they controversially decided to scrap it all and create their own game from scratch using the Gamebryo engine (already used in their earlier games Morrowind and Oblivion) and with their own original plot and mechanics.  From there, virtually every move they made on Fallout 3 was heavily nitpicked and criticized by long-time series fans, with many dismissing it as another "dumbed-down game" ruined by a shift in developers well before it was even out (not aided by the lackluster reception of Fallout Tactics and the extremely mediocre console spinoff, Brotherhood of Steel).

However, Bethesda took things in stride, and even made some genuine efforts to address fan complaints and criticisms.  Rewrites were made to better accommodate their game to series lore (with the discrepant Super Mutant designs and behavior being explained, for example) and some elements of Fallout's design were worked into Fallout 3, such as having damaged or crippled limbs hinder the player and even a slight "turn-based" aspect in the VATS system.  The latter essentially lets the player stop the action temporarily to take aim at a specific enemy, allowing them to target their limbs with as many shots as their AP gauge allows.  AP slowly recharges over (real) time, though, so one can't simply abuse this system constantly to pick off every enemy they encounter with heads hots.  Finally, they secured the rights to "I Don't Want to Set the World on Fire" - the song originally intended to be used in Fallout 1's intro (which was ultimately replaced by "Maybe" in that game); both songs, as well as several other era-appropriate ones, prominently feature on this game's soundtrack, adding much to the game's feel.

Fallout 3 still clearly plays to Bethesda's strengths rather than Black Isle's, however.  Their skill in world design definitely shines through here, with the ruins of DC providing a sprawling, vast area to explore.  Venturing through subways, ruined stores and finding the various landmarks about the area lends much to the game's charm, as does some of the occasional humor seen throughout - entering a particular convenience store sets off a lengthy Rube Goldberg trap that eventually blasts the player with a shotgun, for example.  Also included are a crude weapon-crafting system (letting the player construct a poisonous dart gun and a device that throws junk at enemies for surprising damage, to name two) and they do actually manage to make the world feel like a desolate, bombed-out hellhole in a lot of ways.  Unlike the first two Fallout games, radiation is a very real danger in Fallout 3, with nearly every consumable the player encounters adding to their overall count and slowly weakening and killing them.  Clean food and water is scarce, mutated animals are everywhere and there is quite a lot of bleak atmosphere, with radio signals revealing messages from long-dead people caught in the bombing raids and desperately trying to save themselves and more than a few other bleak stories told through the game's text and audio logs.  The game's overall mood and tone is easily its strongest suit, even if it's not entirely in line with the Black Isle produced Fallout games.

On the other end of the coin, Bethesda's shortcomings are also evident in Fallout 3.  In a reversal from Oblivion, the main quest of the game is easily its strongest element from a writing perspective; it's essentially a family drama with the player's character frequently being tempted by evil as they seek out their father and attempt to complete his life's work.  The rest of the game's quests, however, are relatively forgettable and handed out by characters that aren't really given much in the way of depth or personality.  Some just come off as rather silly (such as having to find a clan of "vampires" or destroy an entire town for no satisfactory reason) while others are relatively mundane (the Nuka Cola collecting quest).  They also seem to have taken note of the karma system from the first two Fallouts and implemented in the most literal of senses here, with quests only really being defined as boolean good-or-evil choices with no real depth or problem-solving element to them - basically, you're either a paragon of virtue or evil for evil's sake, with no real nuance or option for a middle ground.  A pretty disappointing turn for a franchise that formerly defined itself on questlines that often required genuine detective work on the player's part, where the most "evil" option often wasn't just to shoot everybody they could and where even being a "good guy" could prove troublesome for you down the road.

Most of the DLC for Fallout 3 is pretty mediocre as well.  While one can argue that Broken Steel at least provides a more satisfying conclusion to the game than the stock game did, the rest just feel largely by-the-numbers and unnecessary, not really giving the player much more to do than a few more generic quests and stronger enemies to shoot at.  The one I found most enjoyable was Point Lookout, which had a nice, creepy swamp area to explore as well as a rather twisted sense of humor that, at its best points, felt like something from one of the earlier games' better questlines made manifest in a 3D engine.  The rest mostly just consist of relatively small, 2-3 hour quests that add little to the overarching story and don't really provide a lot for the player to do other than shoot things, which is just a bit of a letdown from a company that built itself on crafting huge RPG worlds with intricate lore and mechanics.

When all is said and done, Fallout 3 is a valiant first attempt at a Fallout game from Bethesda.  While they did show some trouble cutting their teeth on the dense lore and the franchise's dark sense of humor, they did at least make an attempt to capture the feel of Fallout as they put their own spin on things, playing to their strengths of world design and giving it a bleak, almost horror-esque atmosphere.  It honestly gave me hope for future games in the franchise as I thought they would take in in more fan suggestions and continue to expand the vast, bombed-out America the franchise was set in.  It's just a pity that they didn't keep going in that direction with Fallout 4, instead focusing more on throwing in countless ideas and gameplay elements with no real direction or integration between any of them...

Developer: Bethesda Softworks
Publisher: Bethesda Softworks
Platform: PC, Playstation 3, Xbox 360
Released:  2008
Recommended version:  Once again, I have to go with the PC versions, which add in modding capabilities.  This allows for an even more bleak and harsh survival experience, more fluidly animated characters and even letting you remove that ugly green smog that permeates the entirety of the game, letting you view the capital wasteland in its full splendor.
Labels: ⭐⭐½, 2008, Full Reviews
Newer Post Older Post Home