Square's highly acclaimed multiplayer action-RPG for the Super Nintendo, which retains a considerable cult following to this day and even had a recently-announced remake.  But does this title still retain its magic twenty years after the fact, or has it just been left in the dust by similar games in the intervening years? 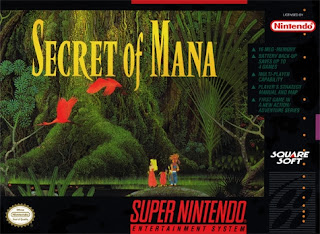 Secret of Mana, as it was known in the US, was actually the second game in the Seiken Densetsu franchise, the first of which appeared on the Game Boy (and was known in most regions as "Final Fantasy Adventure").  While primarily inspired by the dungeon-navigating gameplay style of Zelda, the game took a slightly more RPG-ish approach by giving the player a power meter that would slowly fill over time - the longer they waited between attacks, the more damage they would do.

Secret of Mana continues this trend, though in a slightly modified format.  Attack damage is now governed by a percentage meter that empties after each swing, but quickly refills over time.  Attacking when at less than 100% usually results in only single-digit damage, though, so this mostly just serves as a means to prevent the player from getting up close and mashing enemies to death in any kind of timely fashion.  Later, as the player acquires orbs and powers up their weapons, they can also hold the attack button down to do a charged attack for extra damage, building up to eight levels to unleash a long combination of attacks.  These tend to be just a touch impractical beyond the second or third stage, however - the extra damage you do with a level 8 charged attack generally isn't enough to make it worth the long wait (and level 4-5 attacks generally hit the damage cap anyways, making anything higher than that all but useless).

Despite its actiony appearance, however, Secret of Mana is still very much an RPG at its core.  All of your attacks are governed by invisible dice rolls, meaning that an attack that clearly makes contact on your screen can still "miss" and inflict no damage.  Spellcasting doesn't incorporate any kind of ability to dodge or evade, either - if an enemy targets you with a spell, it hits; no questions asked.  Collecting healing items and powering up your character remain integral parts of the experience, which gets more than a bit inane when you have roughly ten different weapons to use, all of which can be upgraded eight times each.  To say nothing of the may times when you're forced to use a specific weapon to bypass an obstacle (such as cutting down a bush with your sword or crossing a gap with the whip), forcing you to quickly switch to it, use it once, then switch back to whatever weapon you were trying to power up beforehand.  Spells must be powered up through repeated uses as well, which only leads to even more grinding as one needs to purchase MP-restoring items to continually cast them in order to raise their power level.

Naturally, the leap to the Super Nintendo meant that Secret of Mana could provide a much nicer visual/audio experience than its Game Boy predecessor, and indeed, this is one of the game's highest points.  The visuals in Secret of Mana are downright stellar, with brightly colored sprites and many frames of animation for the three main characters.  Music in the game is nothing short of stellar as well, with every area having a very distinct sound and some very catchy, memorable themes for boss battles and victories.

Being on a console also comes with another benefit; namely, multiplayer.  In fact, with a multitap, all three of the game's main characters can be commanded via an actual player, turning it into a cooperative multiplayer experience, akin to a more RPG-flavored Gauntlet.  This is much preferable to playing the game alone, as the party AI in the game is atrociously bad on any settings, constantly being hung up on scenery and running headlong into the same enemy attacks over and over again, dying and forcing you to waste resources reviving them.

Even with the multiplayer option, though, I never found Secret of Mana to be a particularly fun game to play.  While the buggy hit detection is forgivable to a degree, the sheer amount of padding in the game's design makes it a very tedious affair as a whole.  This comes into play with the aforementioned emphasis on grinding, but moreso in the game's dungeons, which primarily consist of long corridors full of the same few enemies.  Backtracking through previously explored areas is all too frequent, as are boss fights; in fact, nearly every boss in the game has at least one palette swap, which before long just makes the player feel like they're being put through the same tasks over and over again just for the sake of having a longer game to play.  In an era where RPGs were tending  toward becoming more concisely-designed, well-paced adventures, it's more than a little disappointing to see Mana go down this route.

In short, while many regard Mana as a classic, I can't say that I ever had all that much fun with it.  Its padded feel and the overall clunky, grind-heavy nature of its design make it much more of a chore than an enthralling adventure.  While it was one of the first games of its kind that could be played with friends, the release of Diablo only three years later, and the release of many similar but better games since (Torchlight II being a personal favorite), relegate this one to little more than a historical footnote in my book. 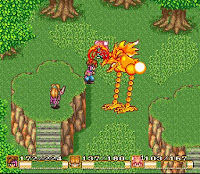 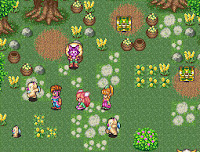