The Legend of Zelda: Ocarina of Time

The first Legend of Zelda game to make the leap to the realm of 3D, as well as a game that is widely regarded as being one of the finest ever made, period.  But does Ocarina of Time deserve all the accolades it's gotten, or this just a case of a game that, while influential in its time, has not aged particularly well? 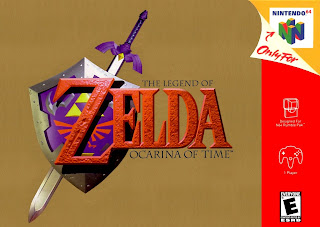 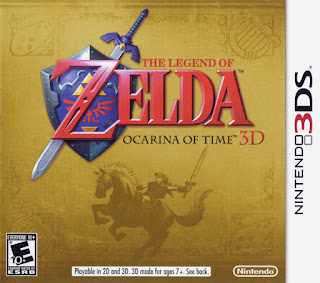 Anyone with a serious interest in gaming at least knows of the Zelda franchise; it was among the earliest, and remains one of the most beloved, examples of a game that combined action and RPG elements together on a video game console.  Fans of twitch-based action had much to enjoy in the fast-paced combat and varied enemies, while more cerebral fans found merit in the puzzle solving element of the game - having to decipher clues, find hidden passages and locate special items to reach new areas were key parts of the experience.  Undeniably a trend-setter for its time, as well as a major influence on gaming as a whole even today.

After a direct sequel that changed up the game's format (garnering mixed reception among fans) and two prequels that followed closely in the original's footsteps, the Zelda franchise became announced as one of the leading titles for the Nintendo 64.  Naturally, the franchise would now make the leap to 3D, promising to immerse the player in a newfound level of realism in its environments and making combat more strategic and intense than ever before.  As acclaimed as the franchise was, it was little surprise that Ocarina of Time met with massive acclaim upon its release, quickly cementing numerous "Best Game of 1998" awards and earning a spot among the most highly regarded video games of all time.

For its time, it's certainly not hard to see why Ocarina of Time was so lauded.  Its large, detailed environments were downright spectacular to behold at the time, even though by today's standards they're largely considered pretty gaudy with their angular geometry and low-res green and gray textures.  Dungeons take advantage of their newfound dimension as well, with the simple 2D mazes of earlier Zeldas now being replaced by relatively realistic temples, caves and volcanoes, among others, and requiring the player to do things like push blocks to reach higher ledges or leap off a ledge, using the extra momentum to break through a thick spider-web.  Combat takes advantage of this new dimension in numerous ways by allowing the player to block and redirect attacks, perform dodge rolls and even take aim with a bow in first person mode to shoot distant targets.  Battling with multiple enemies is now a much more tense ordeal, as the player must decide moment-by-moment which foe to focus their attention on and carefully maneuver for position to get themselves out of a disadvantageous situation.

Early 3D came with its own set of problems, however.  The finer points of tight controls were still something that even Nintendo had not yet fully mastered, resulting in Ocarina's 3D movement being rather stiff and awkward.  This wasn't helped by the overall lack of camera controls in the game - the player can press the L button to recenter the camera behind themselves or C Up to go into first-person view, but free-range movement was still a ways off before secondary analog sticks came standard.  Mapping virtually every environmental interaction to a single button (A) can be somewhat frustrating at first as well (can't even count the number of times I dropped a bomb at my feet because I wasn't moving enough as I threw it), as can the automatic jumping when one walks off a ledge.

The game also shows much evidence of the developers having trouble adapting the overall design of Zelda to a 3D format.  Many overworld maps are just plain bland, consisting of huge, empty areas with little to see or interact with (moreso in the future timeline, where the Peahats and spawning skeletons of the past are conspicuously absent).  Puzzles tend to be relatively simplistic and, at times, very repetitive over the span of a dungeon, with the most infamous example probably being the Water Temple.  Or, as those who have played it know it, "a three-hour exercise in re-equipping boots and playing the ocarina to raise and lower the water".  Much evidence of scrapped design elements remain in the game's code, with numerous unused rooms, scene setups, animations, backgrounds and other elements still present, as well as hints of wind-themed and ice-themed dungeons that were hastily repurposed in the final game.  Many of the side-events in the game feel very basic as well, from a drab mask-selling sidequest to a particularly dull minigame where one must follow a gravekeeper around a graveyard, very slowly, and pay him ten rupees to dig at various spots in hopes of finding a heart piece.  Taken as a whole, it feels much like Nintendo had to cut down much bigger plans for the game in light of unexpected technical limitations and had to hastily repurpose many elements to provide a more "complete" game.

Further compounding this is the player's repertoire of items, which feels very restricted compared to earlier Zeldas.  Acquiring bombs, for example, is now a marked event in the game's story progression rather than a common drop from defeated foes.  Many of the items the player acquires are simple upgrades on existing items as well, such as the Longshot (giving longer range to the Hookshot) and the Fire and Ice arrows (only the former of which plays an essential role in the game's progression).  A very large emphasis is also placed on acquiring new songs for the ocarina and using them to fast-travel between areas or clear obstacles, which gets a touch repetitive over the course of the game.

Nintendo is nothing if not self-aware, however, and clearly predicted that people may have some trouble adapting to the newfound 3D take on Zelda and figuring out its quirks.  To this end, they gave Link a fairy sidekick in Navi, who explains many key elements of the game to the player throughout.  But as any player can tell you, they went just a touch too far with this idea.  The action frequently gets interrupted so that Navi can explain something (or just make inane observations), and virtually every enemy in the game has their abilities and weaknesses explained out in considerable detail, removing a very large puzzle element from the game.  While I can accept this for an early dungeon that eases the player into the game, much of the satisfaction of figuring out the game's puzzles is ultimately lost when Navi explains every detail of them to the player in an unskippable cutscene, hampering the quintessential Zelda experience considerably.  Having a fairly shrill voice and only a limited few voice samples that play any time she pipes up certainly doesn't make her any more appealing of an inclusion either.

In short, while Ocarina of Time was an admirable first attempt at moving Zelda into the third dimension, its rough edges were pretty apparent at the time of its release and only show more today.  It was still an impressive game for its time in many respects and remains a fun one to play today in spite of its faults, but those used to later entries in the series will have a few hurdles to overcome before they can see what it really has to offer.  One may also wish to skip many of the subquests, too, as a lot of them feel rather shoehorned in and aren't especially entertaining or rewarding. 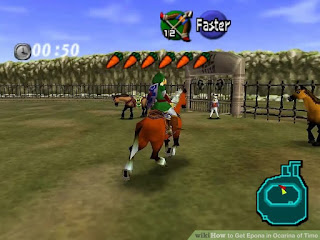 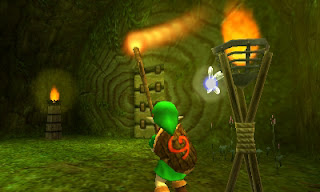 Developer: Nintendo, Grezzo (3DS Version)
Publisher: Nintendo
Platform: Nintendo 64, Gamecube, Wii (Virtual Console), Wii U (Virtual Console), Nintendo 3DS
Released:  1998, 2002, 2007, 2011, 2015
Recommended version:  Most versions are direct ports of the original Nintendo 64 release, though the Gamecube version also includes a previously unreleased version called the "Master Quest" that features remixed dungeons that are significantly tougher than the originals.  The 3DS version features a smoother framerate, improvements to the interface (with the hover and iron boots now being button items rather than something one must pause to equip) and updated visuals which give it a much cleaner and more polished look.  This version also includes a unique take on the "Master Quest" with flipped maps, giving that mode a significantly new feel.
Labels: ⭐⭐½, 🎣, 🎵, 1998, Full Reviews
Newer Post Older Post Home