The first video game adaptation of the fantasy cyberpunk tabletop RPG came from a company not exactly known for quality products.  But did they manage to rise above their past efforts and produce a quality title this time, or is Shadowrun just another title to be discarded and forgotten? 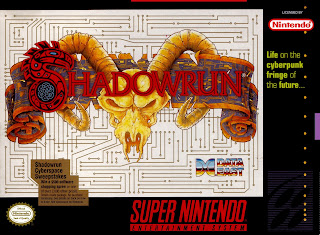 For those unaware of its history, Shadowrun is a tabletop RPG that got its start in the late 1980s, and quickly become noted for its unique setting.  While it utilized some tropes of fantasy RPGs in its playable character classes, use of magic and occult themes, it was more of an urban fantasy/cyberpunk experience than anything.  The player was put in the role of a Shadowrunner who worked underground, doing illegal jobs of corporate espionage, hacking and assassination and then vanishing back into anonymity to plan their next move.  This, of course, lent itself to a lot of complex storylines, morally ambiguous characters and an overall grim atmosphere, which made it a prime target for adaptations into other media.

On the opposite end of the scale, Beam Software is a name that's not exactly associated with quality products to most gamers.  They made a bunch of poorly-received games on the 8-bit NES, from the aptly-named Bad Street Brawler to Dash Galaxy in the Alien Asylum to a plethora of mediocre licensed titles based on properties like the Punisher and Back to the Future.  Given their pedigree, I would imagine that not too many people were excited about them getting their hands on the Shadowrun IP for an outing on the Super Nintendo.

Thankfully, the end result was surprisingly competent; arguably Beam Software's most impressive game in the entirety of their history.  While Nintendo's infamous content censorship policies were still in effect in 1993, the game nevertheless managed to convey a dark and heavy mood.  The game's opening cutscene is emblematic of this, showing your character as he brutally gunned down by several hitmen and left for dead.  This only continues throughout the game, with your character under constant attack from waves of hitmen, supernatural monstrosities of all types and the overall storyline, which revels in its themes of corporate corruption and Shadowrun's unique urban fantasy elements, and all accompanied by some surprisingly strong visuals and an unsettling, moody soundtrack.

In terms of gameplay, Shadowrun operates something like a cross between a point-and-click adventure game and a real-time action RPG.  While movement is handled with the D-pad as in most SNES games, much of the player's interaction with his environment is handled by pressing the R button to activate the cursor, then moving it around the screen and clicking on objects and people to interact.  Combat in the game plays out similarly, having the player position the cursor over an enemy and pressing A to fire their current weapon at them.  Curiously, however, the SNES Mouse is not supported in the game, which can make some encounters (particularly with fast-moving enemies) a bit more frustrating than they should be, though the game does attempt to compensate for this to a degree by having the cursor "snap on" to enemies and points of interest once the player moves it over them.

As mentioned, the gameplay overall is much more reminiscent of computer games like Ultima and King's Quest than the more action-driven Japanese RPGs that were prominent on home platforms.  Much emphasis is placed on the game's dialog system, with the player being required to converse with NPCs in order to learn keywords that they can use in later conversations to earn information.  Puzzles in the game follow this format as well, with the player frequently having to acquire items and use them at the proper times in order to advance, though these do show some occasional fuzzy logic as well.  For example, the coroners in the morgue the game starts in will be afraid of the player and flee him at first, but once they acquire some sunglasses and a Lone Star badge, they will not recognize him anymore and divulge some key information.  Some other, seemingly useless items in the game will also tie into the game's spell system, so it is oddly to the player's benefit to collect almost everything they find, no matter how arbitrary it may seem.

Another element of the game, common for tabletop-inspired titles but much less so for other RPGs seen on the Super Nintendo, is that Shadowrun lacks a universal "level" system.  Instead, the player gains Karma for completing tasks and slaying enemies, which can be spent as they rest in order to boost their statistics in a variety of fields.  For example, putting more points into Strength will allow them to equip heavier armor, Firearms lets them equip bigger and more poweful weapons, and Body will give them more hit points.  Each level spent costs one more Karma than the level before it, so moving Body from level 1 to level 2 will cost 2 Karma, moving it to 3 will cost 3, and so forth.  Other skills will also become unlocked as the game progresses, with the player getting the ability to boost their Decker skills (for hacking segments) and Magic (for casting spells).

One major element of the game's challenge, particularly early on, is the extremely limited resources the player is given.  Just starting out the game is a challenge in itself, as you're beset by enemies as soon as you step out of the morgue and you have only twenty HP and no weapons to defend yourself with.  You're actually forced to run from the first few enemies you encounter into a back alley, find a pistol on a dead Shadowrunner, and use it to dispatch the few foes that ambush you.  Once you have that down, the next challenge is to find a safe zone where you can rest and save the game, which is another challenge in itself - there are numerous pathways to go down at this point, but most simply lead you to more foes which will deplete your limited HP.  Money is very limited throughout the adventure as well, with randomly-spawning enemies only giving you a pittance (if any at all) and weapons, armor and key items costing large amounts of money, effectively prohibiting you from purchasing them until you've completed several key objectives (which often give hefty cash and karma payouts).

Once the game gets going, however, the opposite becomes true.  The stronger weapons can quickly cut their way through almost any foe, while some of the spells the player gets access to are, for lack of a better term, completely broken.  The Freeze spell, for example, takes one enemy entirely out of the fight for several turns, allowing the player to wipe them out without ever putting themself at risk, while the Invisibility spell makes it so that no enemies will actively attack them for its duration, turning all fights for the rest of the game into a joke.  That said, some fights in the game are equally unbalanced at times.  For example, the dragon boss late in the game does enough damage to wipe your character out in only one or two seconds, regardless of their health and armor levels.  He sees through your Invisibility spell and the Armor spell doesn't help either; while it stops you from taking damage, his constant gouts of flame effectively stun-lock the player, leaving them unable to attack.  Thus, the only effective way I've found to win that encounter is to completely immobilize him with the Freeze spell, shooting away at him and recasting it every few seconds until he goes down.

Some other Shadowrun elements appear in the game as well, with varying degress of success.  Other shadowrunners can be hired at most bars in the game to temporarily aid the player in combat, with their cost and overall effectiveness being determined by the player's Charisma and Leadership stats respectively.  The game also contains some hacking segments once the player acquires a Cyberdeck; these play out like a simplistic board game of sorts where the player attempts to hack nodes in order to open pathways in the current level or simply find caches of Nuyen to add to their money reserves.  One must avoid or destroy IC traps as well; these will quickly deplete their health, and dying during these segments, like in the main game, is an immediate game over.

In the end, Shadowrun ultimately accomplishes what it set out to do, creating a surprisingly competent CRPG-like experience on a system mostly known for Japanese ones and effectively emphasizing puzzle solving and exploring a dark urban fantasy world.  While it features somewhat unintuitive design and logic in a few of its puzzles and its combat is far from the best in the genre, Shadowrun is an admirable and surprisingly entertaining game.  Certainly worth a look for any fans of cyberpunk or urban fantasy, particularly those curious to see where the excellent modern Shadowrun games drew their roots and primary design inspiration from. 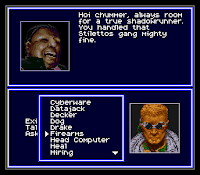 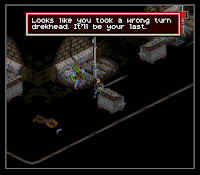