After deviating from most of the series' norms in Final Fantasy VII and a disappointing followup to their new format in VIII, Square attempted to strike a balance between old and new with Final Fantasy IX.  But does this return to form appease long-time fans, or had the series crossed the point of no return? 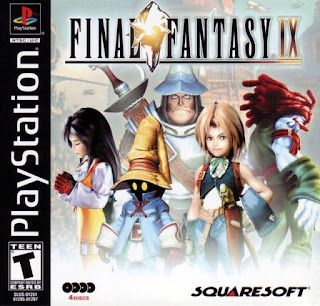 Final Fantasy VII was Square's first Final Fantasy game after their departure from the Nintendo camp in favor of Sony's Playstation, and it remains a divisive title among the series' fans.  This largely comes down to the fact that it also marked a departure in tone for the series, stepping away from the high fantasy settings of the 8 and 16-bit titles and becoming something more cyberpunk in tone, bringing with it darker themes and heavy usage of Abrahamic iconography.  While it was a tremendous critical success and the second-highest selling game on the platform (beaten only by Gran Turismo), many long-time fans felt alienated by the tone shift it brought that also set the tone for many of Square's following releases.

Seemingly wishing to address these complaints, Square created Final Fantasy IX and made efforts to stress that this was a return to form for the series, with a tagline promising that "the Crystal comes back" (referencing an oft-used plot device in early Final Fantasy titles), returning the setting to a medieval fantasy world and utilizing a more exaggerated and colorful visual style in general.  The gameplay itself also reflects this shift, returning the main characters to more familiar class archetypes and rebalancing the gameplay to rely much less on spamming overpowered summons and limit breaks.  The game is also peppered with sly references to earlier titles, from music cues to item names to various locations and characters having similar or identical names and functions.  Finally, series creator Hironobu Sakaguchi returned to a primary writing and design role after being largely relegated to Producer or Executive Producer positions since the fifth game, contributing much to the overall tone of the game and its story.  This works both for and against the game, with some strong and often humrous interactions between the protagonists and various NPCs but also some very cheesy, purple-prose laden dialog from the game's main villains.

Perhaps the most striking change-up from the earlier Playstation Final Fantasies is in IX's visual style.  The game as a whole looks almost like a storybook or a children's cartoon, with its colorful and intricate backdrops and character models that often have exaggerated features - large heads and hands being the most prominent among them.  Final Fantasy VII had this to a degree with its low-polygon character models outside of combat scenes, but they're always present here, and the more detailed model textures lends them a slightly strange look at first glance.  However, there is also a marked improvement in the characters' overall animations, allowing them to interact with one another in a suprisingly fluid and natural way and provide the game with some comedic elements.

In terms of gameplay, the characters once again fit into familiar class archetypes for the series (Thief, Fighter, Black Mage, White Mage, etc.) and efforts have clearly been made to keep them within these fixed roles - Zidane the thief can never learn Black magic, for example.  However, there is still some character customization reminiscent of the newer Final Fantasy games involved due to the game's creative skill system.  Feeling a bit like a mix between the Magicite system of 6 and the Materia system of 7, characters now temporarily earn new abilities by equipping weapons, armor and accessories.  Once they earn enough skill points, that ability permanently becomes a part of their repertoire, and they are free to swap that equipment out for something else that has better stats or just to learn new skills.  Skills themselves are equipped via a separate menu, with a set number of "Ability Stones" (earned by gaining levels) being required to activate a given skill and earn its effects.  While some of these abilities are shared between all characters (such as status resistance skills), the majority are limited to only a small handful of characters, or even just one.  This allows each character to stay within the confines of their archetype while also allowing the player some freedom to adjust for an upcoming boss battle, or just customize skill sets to their personal preference.

Of course, the game also takes advantage of Square's higher budget and the hardware of the Playstation in ways that its contemporaries had as well.  Final Fantasy IX, like VII and VIII before it, makes heavy usage of cinematic sequences and numerous FMV sequences to enhance its story's key moments and give it a somewhat action movie-like feel.  This works to enhance the mood of the story at key moments, though the heavy emphasis on visuals also works against it in some ways as well, particularly in terms of pacing.  Each combat sequence in the game begins with a lengthy lead-in of the camera panning around the battle background before the enemies slowly fade in, and much effort has been put into giving characters unique animations for each of their attacks, each of which lasts several seconds in itself.  While this does lend to the game's charm at first, it does get a bit tiresome when the player is forced to watch the same animations dozens (if not hundreds) of times throughout, with no option to skip or speed them up.  Even with some efforts made to improve in this regard (such as much shorter summon animations in comparison to VII and VIII's overly drawn-out ones), this remains a major achilles heel for the PS1-era Final Fantasy titles and makes them a bit difficult to revisit nowadays.  Especially since Final Fantasy as a series is famous for its elements that require plenty of combat-oriented grinding.

Some other, less savory elements of the franchise (and Square games as a whole) do also creep into the experience at times.  In particular, some innocuous decisions can close off opportunities to get certain items in the story (such as not walking over a flimsy bridge when the player is not punished for running anywhere else in the game), and there are bouts of heavy, tedious grinding required to get some items (such as Quina's ultimate weapon).  The game also shoehorns in another tedious card-farming/playing minigame in the form of Tetra Master, though thankfully it is much less integrated into the game's overall design than it was in FFVIII, being entirely optional outside of one story event that requires the player to win a handful of matches.

Taken as a whole, Final Fantasy IX delivers what it promises, returning the series to its original feel while retaining many elements of contemporary entries, with several good and bad elements of both worlds on display.  Still, there is much to like in the game's dynamic characters and return to a more puzzle and strategy-driven design, and the lighter, more fantastic tone is a breath of fresh air after two overly complex (and frequently nonsensical) science fantasy plots.  Final Fantasy IX is not a perfect experience, but it is arguably the one that holds up the best among its Playstation 1 contemporaries.

Developer: Square
Publisher: Square, Square Enix
Platform: Playstation, PC, iOS, Android
Released: 2000, 2016
Recommended version: While the core game is essentially the same in all versions, the PC port includes higher-resolution backgrounds, auto-saves and some additional features to speed up the game (including a fast forward function and the ability to skip most battle intros and FMVs).  This generally helps with the gameplay pacing issues and cuts down on much of the tedium of grinding (as does the very cool Memoria mod), so that is the version I recommend.