Obsidian attempts to return to their genesis days in the 1990s with a crowd-funded RPG.  But do they manage to recapture the magic of their earlier hits, or is this just cheap pandering to fans of a bygone era? 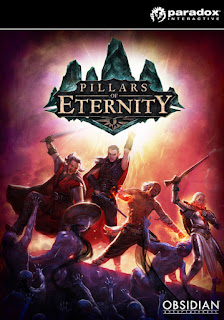 Pillars of Eternity presents itself as a spiritual successor to the classic Infinity Engine titles, which doubtlessly won a lot of acclaim with gamers who remember an era when CRPGs were actually challenging and had some layered characters and moral ambiguity to them instead of being dime-a-dozen clones of railroaded, one-dimensional dreck like Mass Effect and Jade Empire. Either that or absolute trash like the Witcher, a franchise whose sole selling points seem to be its gratuitous nudity and constant use of profanity to get a snicker out of the twelve-year-olds in the audience. Unfortunately, while Pillars does capture the presentation of that era to a T, the same cannot be said for the gameplay.

The game seeks an awkward middle ground between abolishing the class system present in the Infinity Engine games and holding strictly to it. They "abolish" it in the sense that characters now have no armor or equipment restrictions (equipping armor now grants more protection at the cost of mid-battle health regeneration... which is so slow as to be effectively meaningless anyway) and access to a unified skill set for things like trap setting, stealth and crafting items and potions. They "uphold" it by maintaining the divided class system, with characters firmly fitting into the usual fighter/bard/mage/cleric archetypes, each with their own set of mechanics and leaning toward a particular prime statistic. It's a strange paradox that doesn't end up making much of a difference anyway, because odds are you're going to want to keep to a character's given archetype in order to get the most out of them. There's not a lot of point to giving your mage a sword or your thief heavy armor or spending valuable skill points teaching your fighter alchemy when he could just put those points toward being a much more effective fighter, now is there?

That said, things are not all bad on the design front. Some of the class-specific mechanics are actually rather clever. For instance, characters now get skills that they can use a set number of times per battle, which is nice given that the game restricts supplies you need to make camp and you're generally running on a very limited set of resources, particularly early on on the game. Some of the ways skills implemented are also refreshingly clever - bard songs, for example, not only provide cumulative buffers for the party over time (via escalating song verses), but they can still move and attack while singing and cast unique spells once their verse count reaches a certain height, allowing them to serve well as both a back-line supporter and a decent ranged attacker. Monks utilize a somewhat similar mechanic, gaining access to more powerful skills as they take damage in combat and raise a "wound" counter - effectively, the more damage they take, the more dangerous they become. So yes, there are still hints of Obsidian's genius here - it's just a shame they're so few and far between that they might as well not exist at all.

The lackluster skill system may have been forgivable had the overall gameplay managed to capture the charm of its Infinity Engine counterparts, but alas, it does not. They seem to have missed the perfect balance those games achieved of "difficult, yet ultimately winnable and rewarding battles", omitting everything but the first and second words of that phrase. This primarily comes down to the combat engine in the game - to be blunt, fighting in Pillars of Eternity is downright miserable.

In contrast to just about every CRPG ever made, where they are the class who can single-handedly turn the tide of a battle, mages are virtually worthless in Pillars of Eternity. They have paltry damage output with their spells and only a handful of weak debuffs to use to maybe give their fighters a slightly better chance of winning out against the odds. Enemies ignore any shred of realism in their tactics, instead focusing on simply winning the fight as quickly and cheaply as possible. Mobs constantly outnumber the player and are consistently much stronger to boot, and all of them seem to follow the exact same AI pattern - beeline straight for your weaker characters on the back line, completely ignoring your front line fighters so they can tear into soft, vulnerable mage flesh with all the abandon of piranhas on a slab of raw beef. Then, once your support inevitably falls seconds later, they simply do a heel spin and focus on your fighters, shredding them in an instant owing to their superior numbers and the fact that they now have you effectively surrounded (which both incur substantial penalties to evasion rolls). Reload and repeat about two dozen more times per encounter until you eventually reach your boiling point and have to uninstall the game before you throw your keyboard through the monitor.

It doesn't help that in comparison to games like Baldur's Gate 2 or Icewind Dale, your options are frustratingly limited. This is in part due to those games' wider variety of character classes and (useful) skills, but also because the game is generous enough with potions, spell scrolls and other items that give you a temporary edge. You may not be able to win a lot of fights with sheer brute force, but you certainly had a plethora of other options to explore - buffering your party with potions and spells, laying traps and luring foes into them, tossing confusion and harassment spells at them from a distance, summoning monsters to draw some aggro away from your characters and put pressure on their spellcasters, and so on. Eventually, you'd find a viable strategy, and with a bit of practice, improvisation and luck, you'd pull out a victory. It felt rewarding in that way. You certainly wouldn't have an easy time just bum-rushing every mage you come across either, as every one of them came loaded with plenty of defensive spells to protect themselves and disruptive status abilities to keep you off their backs (and you would too, if you wanted your mages to stay alive). Here, you have no such luxury - spells are frustratingly ineffective across the spectrum, buffer items are rarer than Bigfoot and characters have very little to work with in terms of skills until the higher levels... but good luck surviving that long when even a lowly pack of wolves can wipe out your entire party in under twenty seconds. Oh, and don't try to run, either - they saw fit to disable map exit triggers while you're in combat, so it's do or die every single time.

Planescape: Torment also offered a different, though equally elegant solution to this problem by de-emphasizing combat entirely, instead focusing on the game's storytelling element. Battling enemies took a back seat to exploring the vast, dense and bizarre new world you found yourself in, and they took great pains to make it just that; the story of Torment is conveyed through well over one million words of spoken dialog and narrative, and it's all immaculately written and presented. A solid 90% of the game's experience points were earned through completing quests, solving puzzles, exploring dialog trees and advancing the plotline. Yes, there was still combat, and you were often at a substantial disadvantage therein due to your character's inability to equip armor (in an unmodded game, at least), but that ultimately made little difference to the proceedings due to a unique trait of the story - namely, your character's immortality. No matter how many times you dropped, you could get back up and try again with only a minor setback, and the same was true of your allies due to a skill you earned early on in the game. But even then, you still had plenty of options to explore in order to overcome your opponents, and unlike Pillars, simply running away was also a viable one.

In conclusion, Pillars of Eternity is about as disastrous a misfire as a game can be.  It's long-windedly pretentious, witless and boring in its writing, with thoughtless and uninspired gameplay that's a pale imitation of a classic CRPG engine to boot. The fact that it's promoted as a "spiritual successor" to some of the most well-regarded PC titles ever made, is headed by those same developers, and yet is this bad is simply beyond belief. Obisidian, shame on you for utilizing crowd-sourced funding to release such a substandard product; we all know you're capable of so much better.