Binary Systems set out to create a fully-fledged space exploration game, which was a daunting task with the limited technology of the 1980s.  But were their efforts in creating a virtual galaxy to explore successful, or does Starflight just become a victim of its own ambition? 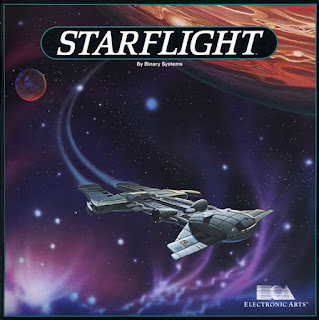 Space-themed games were common in the 1970s and 80s - they were relatively easy to realize even with the limited graphical potential of most computer systems, and of course there were the two big juggernauts of the science fiction genre - Star Trek and Star Wars - to draw inspiration from.  Starflight was certainly no different in that regard, attempting to create a vast virtual universe for players to explore, complete with numerous planets to visit and alien races to interact with.

To that end, Starflight employs an impressively large game environment - some 270 star systems are present in the game, with over 800 planets for the player to land on and explore (though due to the limitations of hardware of the time, most of these are randomly generated).  Each planet the player explores also has a number of factors one must take into account - gravity, weather, life and resources.  Non-sentient living creatures can be captured and sold at starbase for study, while mineable resources can be gathered and sold.  Planets that fall within a set of parameters can also be logged as inhabitable worlds, and will confer a large reward when the player returns to base (or a penalty if they log a planet that is not inhabitable).  Exploring planets and purchasing character training and ship upgrades makes up a very sizable portion of the overall game experience, and honestly does a pretty impressive job of emulating the experience of giving the player a sprawling open game world to explore.

Throughout their travels, the player also encounters numerous alien races, each with their own motivations, technology and abilities, and can even train some of them to join their crew.  These include the insect-like Velox (an arrogant insect-race who claim to be descended from "the Ancients"), the Thrynn (a deceptive and capitalistic dinosaur-like race), and the Elowan (a delicate but highly intelligent plant race).  Others are more ambiguous, such as the Mechans, a robotic race who resist all attempts at questioning and make oblong references to a 'Group 9', and the mysterious Minstrels, who travel through the universe endlessly relaying a cryptic tale.  Still others are outright antagonistic, like the fanatical Gazurtoid and the vicious Uhlek, the latter of whom immediately open fire on the player with no chance of diplomacy.  The player is free to interact with most of these races as they will, and will in fact have to question them on several occasions to uncover important clues and hints - not just for useful resources and items, but to find clues to unravel the game's main storyline.

The game's story at first seems to be a simple one, with the player only being encourage to explore the galaxy and gather resources.  However, after a few weeks of in-game time pass, a larger threat becomes evident - namely that numerous star systems in the sector have endured massive solar flares that leave their planets barren of life, and that the same threatens to happen to humans' new home world of Arth.  The player is then tasked with discovering what causes these events and to stop it by any means necessary.  To this end, they must uncover clues by traveling to various coordinates on numerous worlds, which in turn requires them to discover their whereabouts by interacting with other races and getting information from them; while a diplomatic approach works for some, others may need to be shown some force first.  Each system also has a given time limit before a flare occurs; once that happens, all life in that system is scoured clean and most habitable planets become uninhabitable (and if the player happens to be in that system when it occurs, they also die, bringing a quick end to the game).  This can even happen to the human's home system of Arth, which renders the player unable to buy upgrades or trade in resources anymore and makes their task tremendously more difficult to complete, if not impossible.

The game's scope is certainly impressive, but like many games of the era, the experience is hampered by the hardware on which it was originally presented.  Load times are frequent and quite long, with each visit to a planet being accompanied by a lengthy animation of the player zooming in on the planet and touching down on its surface, complete with a procedurally-generated grid showing their landing area.  There are also noticeable loading times when interacting with alien races (though not quite as bad) and even when exiting to a menu to save one's progress to disk.  Quitting a game without saving also renders one's game data inaccessible, requiring them to reinstall the game from scratch and lose all of their progress in order to restart.  This  may prove a turn-off to gamers more used to modern games, where save-scumming carries little penalty and load times are virtually nonexistent.  The ever-present scourge of copy protection is also present, with the player required to give an "access code" each time they depart from Arth.  The required code is found by lining up matching segments on a "code wheel" included in the game's box.  Should they get this wrong, nothing happens at first; however, they'll soon be beset by the Galactic Police, who ask them to verify their code; should they get it wrong a second time, the game will immediately end.

Starflight, while a bit rough around the edges, ultimately succeeds at what it attempts to create, putting the player in the role of a starship captain and letting them explore a vast sector to their hearts' content, dealing with dangers as they see fit and trying to unravel a complex plot that threatens all life as they know it.  A standout game for its time, as well as arguably the gold standard for every game of its kind to follow.  Fans of space games who can adapt to its somewhat archaic design will find a lot to enjoy here, even thirty years after its initial release.