The first RPG released for the Nintendo 64 was met with much hype from fans, who were desperate for the system to have a killer title of its own in light of the Playstation's runaway success with the genre.  But did Quest 64 allow Nintendo's console to rise to the challenge of its rival, or was it just a mediocre token attempt at representing the genre on the system? 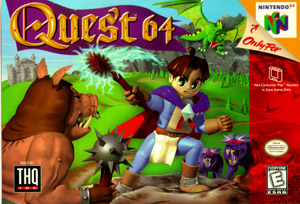 Many RPG fans were left unimpressed with the Nintendo 64; for over a year after its launch, it simply had none to speak of while its chief rival, Sony's Playstation, got several highly acclaimed games in the genre including Suikoden, Final Fantasy VII, Parasite Eve, Symphony of the Night and Wild Arms.  Even the Sega Saturn, which mostly dragged its feet in the west, had a few cult hits in Panzer Dragoon Saga, Shining Force III and Legend of Oasis, so why couldn't Nintendo's system get even one decent RPG to its name?  Seemingly hoping to capitalize on this drought, Imagineer announced Quest 64, pushing it as a new IP that would be exclusive to the system and provide something for genre fans to get excited about.  Unfortunately, while taking advantage of demand is one thing, making a game that fits gamers' expectations is another matter entirely.

From a visual perspective, Quest 64 makes a strong impression.  Its environments are large and colorful, with surprisingly little slowdown and some high draw distance on a platform that quickly became notorious for having copious amounts of "video game fog" to reduce lag and mask short draw distance.  Characters are also fully rendered and show quite a bit of polish, with both the main character and enemies having their own complement of spell and attack animations.  This is easily Quest 64's strongest element, and it plays well to the system's strengths; the Nintendo 64's cartridges simply didn't have the storage space to allow for full-motion video and scores of detailed pre-rendered backgrounds, so they instead took advantage of the platform's hardware to make an impressive-looking, expansive 3D environment that simply wasn't possible on the Saturn or Playstation.

Sadly, while Quest 64 certainly looked good to anyone who saw a passing glance of it in a preview video or game magazine, the underlying game design was far less impressive.  Quest 64, in contrast to its Playstation and Saturn contemporaries, seems to largely regress to the earlier grind-heavy days of role-playing games, requiring the player to fight battle upon battle to build up their stats and earn new spells.  This is not aided by the fact that the game utilizes a non-traditional leveling system.  In a move similar to the heavily-maligned Final Fantasy II, rather than simply gaining experience from fights, one must level up each of their statistics individually by taking actions that correlate to it - attack power rises when doing melee attacks, HP and defense raise when sustaining hits, speed is gained by walking around, and MP is gained by casting spells.  This, paired with the generally slow rate at which statistics are gained, quickly makes the game into a very tedious experience.  This is not aided by the fact that battles in the game are very frequent and often slow-paced, forcing the player to endure lengthy animations of the enemies closing in and throwing the same few spells constantly throughout the entire adventure.

Further emphasizing its dated/archaic design, encounters in the game pop up at random (a disappointing turn at a time when RPGs were beginning to move more into scripted battles, or at the very least being visible to the player and giving them a chance to outmaneuver or outrun enemies), and there are no shops for the player to encounter.  Instead, items are simply found in chests, or given away for free by NPCs.  While the developers do make some efforts to ensure that the player cannot become stuck without any resources (such as characters always giving out at least one healing item when the player's reserves are empty), this can quickly lead to frustration when one is simply not strong enough to defeat a boss and depletes their reserves in their first attempt.  In that case, the player is simply stuck grinding for hours on end, slowly powering up until they are strong enough to overcome the challenge with the few resources they have available.

Combat in the game does at least attempt to add an interesting twist to things, combining elements of turn-based and real-time RPGs together.  While the combat system is still turn-based, the player can move around within a small radius during his enemies' turns, allowing to maneuver around enemy spells and avoid damage.  Moving outside the larger radius surrounding the battle allows the player to flee the battle entirely, though they'll likely have to endure enemy attacks for a few turns before they get that chance.  This adds a slightly unique twist to what would otherwise be a pedestrian combat engine, though the idea was ultimately better realized in the Playstation's Parasite Eve - a comparison more than a few gamers were quick to point out, even at the time.

Some attempts were also made at depth in Quest 64's design; giving the player a choice of four elements to power up adds some strategy to the game (in theory) and each area the player reaches has numerous hidden secrets to find, including several "spirit gems" that instantly raise a magic level by a single point, saving the player from some of the tedious grinding aspect.  Unfortunately, the elements system falls prey to poor balancing; Wind and Fire spells are generally weak and ineffective, while Water spells provide the all-important ability to heal and Earth provides a damage-absorbing barrier and an extremely powerful avalanche attack that, once unlocked, steamrolls virtually every enemy encounter in the game.  This, paired with the mundane applications for nearly all spells (simply being slight variations on "attack the monster"), effectively nullify what could have been an intriguing element of the game.  By giving the player the ability to adopt different strategies and play styles depending upon their element(s) of choice, or even granting them spells that would allow them to uncover hidden secrets or alternate paths or even solve puzzles in different ways, the game as a whole could have offered so much more than it ultimately does.

Sadly, Quest also does not deliver much on the character development, world building or storytelling fronts, which by this period had been firmly established as the all-important staples of the genre.  Quest's main story is a simple and archetypal one, with the protagonist simply seeking out his lost father and a magical book that, in the wrong hands, threatens to bring disaster to the world.  Characters are given very little in the way of depth or even personality, and almost no lip service is given to the world of Eltale or its history.  The game's environment is a relatively generic fantasy setting, with almost nothing in the way of creative setpieces until the final hours.  Not even the soundtrack attempts to give the game the feel of an epic adventure, mostly consisting of "just good enough" music tracks to give the player something to hear other than the constant thumping of their character's footsteps.

For its time, and still to this day, Quest 64 delivers only the base essentials of what can be considered an RPG - a fantasy setting, magic spells based on the four Greek elements, and the concept of a young mage who is the world's only hope of salvation.  Beyond its visuals, Quest simply has nothing to offer for any discerning genre fan; there is no decent lore or character building to get immersed in, none of the captivating movie-like experience of its Playstation contemporaries, and not even any interesting gameplay mechanics to get addicted to.  It's a pedestrian attempt at an RPG that might have garnered some fans were it developed and released in the mid '80s, but by 1998 it was well behind the curve, and probably would have gone wholly unnoticed were it not for the Nintendo 64 platform lacking any other games of its kind. 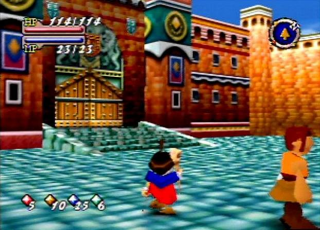 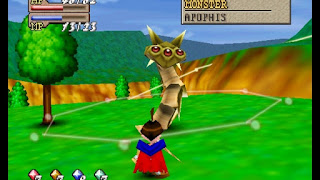 Developer: Imagineer
Publisher: THQ
Platform: Nintendo 64
Released: 1998
Recommended version: The underlying game is the same in all regions, though the Japanese release shows more polish in many respects.  Among others, leveling up some stats is faster, critical hits and double melee attacks (doing an extra hit with a well-timed button press) are added, the player no longer requires a memory card to save their progress, and the ending is greatly expanded.

Quest 64 also had a remake of sorts on the Game Boy Color called "Quest: Brian's Journey" that follows the same story and reworks the same basic gameplay to a 2D perspective, expanding on the plot through in-engine cutscenes.  Oddly, this game had a sequel called "Quest Fantasy Challenge", which abandons anything resembling RPG gameplay and instead plays like a clone of the arcade game Mr. Do.