A breakout title which made Sony and Squaresoft into household names and helped to carry gaming as a whole into a new era, turning games from relatively simple diversions into big-budget blockbusters.  But does this game-changer stand the test of time, or is this one experience that's best left in our memories? 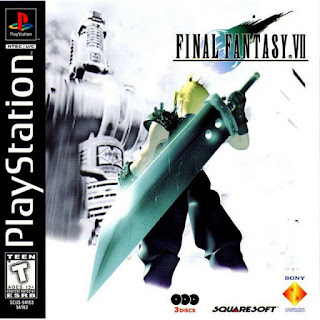 Final Fantasy VII is the first game I can remember being marketed as something much bigger than a mere video game.  As the commercials of the time put it, this a major motion picture in video game form, full of amazing special effects and a cast of thousands.  While marketing does tend to exaggerate claims of grandiosity, especially in the realm of video gaming, Final Fantasy VII's developers certainly did their best to live up to the hype.  This was not a typical RPG set in a world of tile-based movement and static backdrops; instead, the game's protagonists were now leaping across rooftops,fighting bad guys atop trains, and even taking part in high-speed chases down the highway as armed troops pursued their getaway truck.  All in a plethora of environments and set pieces that not only drew inspiration from mythology and Tolkien-styled fantasy, but from works like Blade Runner, Shadowrun and Mad Max.  While not the first game to blend elements of action and science fiction into the JRPG genre, it was certainly the most successful attempt at it to that date; the Playstation's capability for high resolution prerendered backgrounds and full motion video helped bring the game's world to life in a way not seen on earlier systems, and even the in-battle characters upped the ante by being fully animated 3D models instead of the simple, static sprites of earlier Final Fantasy games.  Some battles even used elaborate setpieces to give the game a more fast-paced, action-driven feel; from fighting atop trains to a battle with a war machine atop two elevators descending the side of a skyscraper.  The game definitely succeeded in providing a new presentation to the RPG genre, which until this point had been largely viewed as relatively slow-paced and methodical.

Final Fantasy VII's new focus on visual flair proved to be a mixed bag, however, as with it came a drastic change in the RPG paradigm, particularly for Square.  Final Fantasy's customizable characters, challenging active-turn gameplay and distinct high fantasy settings became more and more muddied with new mechanics of varying quality and many more modern elements in their design.  The franchise's class system that divided characters into the familiar fantasy archetypes (Fighter, Thief, Mage, Cleric, etc) was now totally cast aside, with any familiar Final Fantasy abilities now relegated to "Materia", small orbs that can be placed into slots in a character's equipment in order to grant them new spells and commands, and with materia orbs leveling up independently of the characters themselves and able to be freely exchanged between characters at any time.  While this does allow the player to change up their strategies on the fly, it also renders the playable cast more or less indistinct from one another.  They attempted to offset this by having Materia carry advantages and disadvantages; magic Materia tends to lower the character's attack power and maximum HP, for example, while physical skill Materia boost their speed or vitality stats.  However, I don't think they went far enough with this idea; drawbacks for Materia tend to be minimal at best (losing 2% of your HP and one point of attack per materia isn't much of a deterrent, even in large quantities) and you don't really gain enough benefit from having a "pure" Mage, Thief, Fighter, etc. character to make it a strategy worth pursuing.

The Materia system does have at least one interesting twist, though: Materia effects can be combined with one another in linked slots to provide extra benefits.  For example, combining the Double Cut Materia (which allows more than one attack per turn) with the MP Absorb Materia causes physical attacks to absorb MP from enemies, while combining a Restore Materia with an All will cause restorative spells to affect the entire party a set number of times per battle (depending on All's level), rather than simply targeting one person.  This does add a degree of strategy to make up for what the classless system removed, though it does become comically game-breaking once some of the more powerful materia begin to show up - draining MP with every attack, casting Phoenix as soon as one dies, et cetera make the game's difficulty pretty trivial, especially in its later stages.
Another controversial change to the gameplay comes in the Limit Break system.  Each character has a "Limit" gauge that gradually fills as they take damage, and once it is full, they can unleash a "Limit Break", a powerful attack that does substantial damage to one or all enemies on the field or boosts their party in some way.  These vary from character to character; while most simply play an animation that boosts the party or attacks an enemy (or enemies), others play out as something of minigames, such as Tifa's Reels that determine how many attacks she can string together in a combo, or Cait Sith's slots that have a number of randomized effects from healing the party to casting a random summon at no cost.  These definitely add a more arcadey flair to the gameplay, but like the materia system itself, they tend to be quite overpowered - Omnislash and Meteor Swarm in particular are famous for being some of the most broken attacks in video game history, hitting for tens of thousands of damage per use and very spammable with the right setup.

Final Fantasy VII's gameplay definitely isn't the most polished the series has seen for these (and other) reasons, but the game was built more as a vehicle for graphics and storytelling, which it takes to new heights.  Not just on the merits of its well-produced cinematics, but for the writing itself - the CD format definitely adds volumes here, giving us a well-rounded cast with their own histories, personalities and motivations, all becoming distinct and iconic video game characters based on much more than having cool designs.  Granted, some characters do get a bit shafted for development (Red XIII in particular doesn't have much at all to do once his story beat is up), but for the most part, this was easily the strongest part of the experience.  Cloud in particular is one of my favorite video game protagonists of all time; he presents himself as a badass hero but in reality has much more going on beneath the surface (and even he doesn't seem fully clear on the details for much of it); without saying too much, this builds up to a very captivating twist toward the end of the game that ultimately makes Cloud one of the best-defined, as well as most intriguingly flawed, protagonists in any game I've played.  Hell, even the goofy cat-doll-on-a-robot-moogle has more going on beneath the surface than initially appears and gets a few surprisingly well-written scenes; something I rarely saw for the goofier characters in earlier Final Fantasies.  It's not totally without doofy humor - just look at Palmer once you hit Rocket Town - but it still feels a big step forward for storytelling in RPGs and gaming as a whole.
In addition to that, the visual technology that the Playstation brought is put to brilliant use, bringing a new level of immersion and atmosphere to the world it's set in.  No longer was the environment broken up into a distinct grid from a fixed view; by utilizing prerendered backgrounds and multiple camera angles, you were able to walk, climb and leap through slums, city streets, forests, caverns and even go into space, and you felt like you were actually there with the characters - little touches like graffiti, bent branches, functional-but-ruined machinery gave it that much more impact than 16-bit sprites ever could.  This was also used to great effect in the storytelling - there's plenty of unsettling imagery, bizarre monster designs (both mythological and products of mad science) and surreal scenes that add perfectly to the heavy cyberpunk feel and horrifying moments it carries.  And while the earlier Final Fantasies had staged cutscenes, Final Fantasy VII takes them to a new level; characters actually move about, interact with the environments (and each other) and animate expressively for each scenario they're in; enough to make you forget that they're blocky lego-men models with about twenty polygons apiece.
But as any RPG/anime/manga fan can tell you, the game's design and themes also proved to be a double-edged sword on the whole; in the years following Final Fantasy VII's  success, it seemed that nearly every franchise out there attempted to copy elements of VII's design.  This resulted in a lot - and let me emphasize, a lot -  of angsty protagonists with crazy hairstyles and shady pasts fighting against evil corporations and Biblical-themed antagonists, usually wielding gigantic, impractical weapons as they did so.  From King of Fighters to Inuyasha to Trigun to Fullmetal Alchemist to several other copycats within the RPG genre (Legend of Dragoon, Shadow Madness, Shadow Hearts, Grandia II and Star Ocean 3 just to name a few), it seems like everyone wanted a piece of the Final Fantasy VII pie.  This has largely died off in recent days, but the media of the late 90s and much of the 2000s were thoroughly saturated with these elements, which got to be a bit tiresome and may have soured some fans on Final Fantasy VII's long-term appeal.  Probably more than any other, Final Fantasy VII stands as proof that widespread acclaim and success is a double-edged sword.
For these reasons, as well as its divisive change-up in style and gameplay, Final Fantasy VII was a standout game in its time that continues to divide the fanbase even today.  That said, I still absolutely adore this game - the presentation for the time was nothing short of incredible and still holds up today despite its low-poly character models and some strange direction at times, and the characters remain some of my favorite in all of gaming - one of the earliest examples of a game where they felt like actual people with motives, passions and histories, not just cardboard cutouts with skills.  Its gameplay may not be the series' best on a mechanical level, but it's fast-paced, fun and rarely relies on tedious grinding, which really helps its longterm appeal.  More than anything else, though, it got right what many of the later Final Fantasy games wouldn't - finding a balance between the fun/camp factor and serious storytelling that worked in heavy psychological and mythological themes, but never crossed the line into becoming preachy, pretentious or manipulative.  I think it's one every serious RPG fan should play at least once, if only to see what it gets right (and so many of its copycats would get very, very wrong). 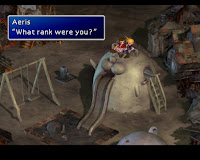 Developer: Squaresoft
Publisher: Sony Computer Entertainment
Platform: Playstation, Playstation 3/Portable/Vita (Downloadable), Playstation 4, PC, iOS, Android
Released: 1998, 2015, 2016
Recommended version: All versions of the game are more or less the same, but the recent Switch and PS4 releases add in a few "cheat" functions that allow the player to triple the game's animation speeds, skip random encounters or activate a God Mode that instantly restores their health and fills the Limit bar.  This allows those only interested in the story to make their way through the game, and those interested in the gameplay to speed up the more tedious grinding aspects and lengthy spell animations.  So for both the more casual and die-hard gamer, those are the ones I recommend.
Labels: ⭐⭐⭐⭐, 🎵, 👑, 1997, Full Reviews
Newer Post Older Post Home